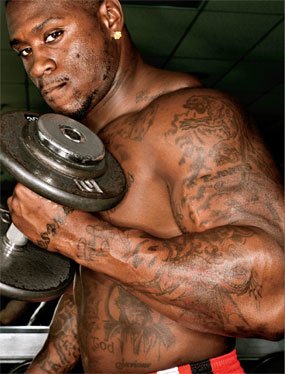 There is a Facebook group entitled "Thomas Jones' Arms Are Thicker Than My Legs." That the group has only 33 members as of this writing is irrelevant, because when it comes to arm development, Jones has few rivals. Currently lining up as running back for the Kansas City Chiefs, he has the most admired set of guns in the NFL. More importantly, however, they serve a specific, practical purpose.

"As a running back," Jones says, "I have to hold on to the ball, and the stronger your arms are, the more likely you are to be able to do that well. They also help me take the blows I have to take when I'm in pass protection."

There's an intimidation aspect in play with Jones here, too. Jones says he performs better when he feels good in his uniform.

And it doesn't hurt that he knows defensive backs don't exactly like seeing guys built like him coming at them full speed.

Since entering professional football with the Arizona Cardinals as the seventh pick in the 2000 NFL Draft, Jones, whose career has also included stints with the Tampa Bay Buccaneers, Chicago Bears, and New York Jets, has rushed for over 10,000 yards, including ﬁve consecutive 1,000-yard seasons. He's perhaps best known throughout the league, however, for his dedication in the weight room.

"I just love being in the gym. I love the environment. For that hour I'm in there, I'm just focused on myself and doing something that feels good to me. I think the older I get, it just becomes more of my personal time." 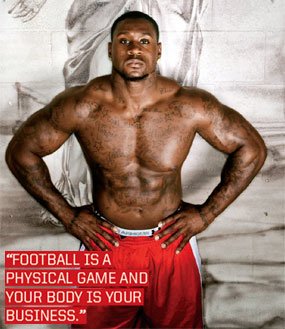 Jones and brother Julius, who plays running back for the New Orleans Saints, grew up in a coal-mining family in Big Stone Gap, VA. When Thomas turned ﬁve, his father fed him a steady diet of push-ups and sit-ups-a regimen Jones claims is responsible for his body's impressive structure. Now in his twelfth year in a league where the average career at his position lasts a paltry two years, Jones credits his staying power to a lifetime of physical training.

"It has been the major part of my success," he says. "Football is a physical game, and your body is your business. If you don't take care of it, you're not going to last that long."

During the season, Jones maintains a rigorous daily workout routine, even hitting the gym on Mondays after games. Wednesday is the most important in-season practice day among NFL teams, and Jones says his Monday workouts help him get through his post-game soreness earlier in the week.

"Thomas is one of the most disciplined athletes I've ever trained," says Pete Bommarito, who works with Jones in the off -season at Bommarito Performance Systems in Miami. "That's why it's so easy for us to make gains with him. It's not necessarily about the program, but the overall quality of the work."

Jones' oﬀ -season upper-body lifting takes place on Mondays and Thursdays-with Monday devoted to power development and Thursday focused on speed. At 5'10", 215 pounds, the compact veteran still tries to make his upperbody training as heavy as possible, often working with loads over 400 pounds on the bench press. He says, however, that to prevent wear and tear on his joints, he no longer uses heavy weights with his lower-body lifts.

"My upper-body lifting has to stay heavy," he says, "because that's where I'm taking most of my hits."

That's a favorite of ours, or we can combine dumbbell incline rows with speed band push-downs. We'll go from one set right into the next, then rest for one minute."

Most of Jones' Bommarito-designed upper-body programming works his triceps directly. By contrast, much of his biceps work hits the muscle indirectly as a function of lifts that target his back. These are high-rep exercises that place Jones' biceps under tension for relatively long periods of time. Because of the heavy loads with which Jones trains, this tends to blow up his biceps as well as, or better than, any series of isolation exercises.

Jones' arms are proof that the method works. "I've always prided myself on being a technician," he says. "I've never been the fastest guy, but I try to outwork people and outsmart them. The technique is what's going to keep you consistent, as opposed to the numbers.

Numbers come and go, but if you have good technique, you're going to give yourself a better chance of being in the right place at the right time."

A psychology major at the University of Virginia-he earned his degree in three years-Jones says training must be approached holistically, and anyone disregarding technique, focus, or diet does so to the detriment of the entire process. Even if you're as genetically predisposed to having massive, ripped arms as Jones is, who says his entire family is built similarly, it's still discipline and preparation that gets you where you want to go.

"You can't just go to the gym and miraculously transform," he says. "Your diet is ﬁ rst and foremost, even when it comes to your arms."

At 33 and still productive, Jones is an anomaly among NFL running backs but says he's as well-conditioned as he's ever been and is looking forward to another season. "I don't really look at it like I'm getting older," he says. "I look at it as another season. For a running back, they can look at me and say I'm old, but the way I take care of my body and the way I train, that's not old to me."

Jones' arm training-both direct triceps work and indirect biceps work-takes place during his upper-body workout days on Monday and Thursday, with a little vanity work thrown in on Friday.

TRICEPS SLED WORK
Attach a set of straps to a sled and grip the handles behind your head. Take a step forward and extend your triceps to pull the sled. Retract your arms and repeat until you've pulled the sled 40 yards.


JM PRESS
Lie on a flat bench and grasp a barbell with a close grip. Unrack the bar, then, keeping your elbows tucked, lower it to approximately three inches above your face. Use your triceps to drive the bar back to the lockedout top position.


BAND PUSH-DOWNS
Hold the handles of an elastic band hanging from a pull-up bar. With your feet shoulderwidth apart and your arms close to your body, push your hands down as far as you can, hold for a second, then return to the start position. Superset with a reverse grip.


BODY TRICEPS PRESS
Position a bar in a rack about three feet off the ground. Assume push-up position on bar, your hands shoulderwidth apart. Move heels back so bar is above your head rather than aligned with it. Using your triceps, lower your body so your head is under the bar, then press back up to start.
SLED ROW
Attach straps to a sled, then squat facing it with your arms extended for maximal tension in the straps. Pull the sled explosively toward your body, standing. Step back and repeat for 40 yards.


DUMBBELL SEATED INCLINE CURL
Lying on an incline bench, hold a dumbbell in each hand with your arms hanging straight down. Take three seconds to curl the dumbbells toward your body, hold for a second at the top, then lower the dumbbells to the start position for three seconds.