From Overweight Dreamer To Fitness Fanatic

Bryan thought being heavy was his lot in life, but he always wanted more. Then a friend helped him find fitness, and the two have been on the same quest ever since. 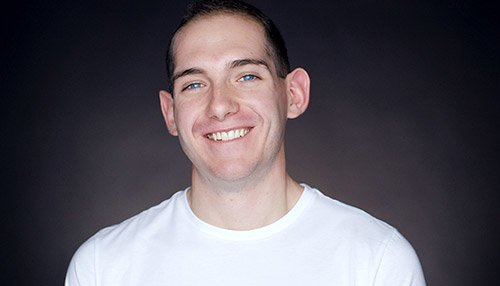 For Bryan, being the bigger kid was nothing new. "As far back as I can remember, I've been the overweight kid in school," he says. "I was very self-conscious. I became introverted, only had a few close friends, and spent a good 10 years fantasizing about how much better my life would be if I looked athletic. Still, I never really took any action to change."

It wasn't until the middle of his sophomore year of high school that things changed for Bryan. When a friend on crutches with a banged-up knee still made it to the gym and stuck with ROTC, Bryan had a bit of a wake-up call. "I thought, 'Dude, he can't even walk and he's going to the gym,'" Bryan says. "'I can walk and don't go.' That really got me into lifting." After a few weeks, the gym became a habit, and the rest is history.

This is Bryan's story.

Bryan Ambrogi, What Was Your Spark? The Spark
Watch the video - 5:27

You were overweight throughout your youth. Looking back from where you are now, how do you explain it?

I think it was definitely a mix of diet and a lack of physical activity. I didn't really do much. I'd sign up for sports but could barely keep up with the kids in my age group. I'm asthmatic, so on top of being overweight, that pretty much killed me when it came to keeping up with everyone else. We'd run sprints and suicides in basketball, and I'd always have to take a break.

My diet didn't help either, though. I remember times when I'd spend the whole day eating. This one time, I downed an entire sleeve of Thin Mints in one sitting, which wasn't unusual. Junk food was my weakness. 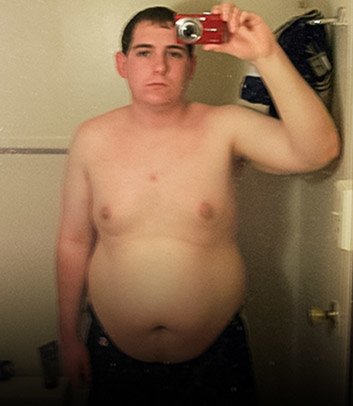 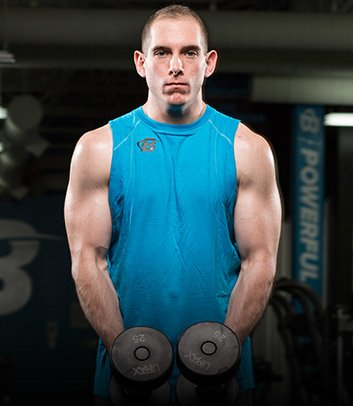 How did your weight affect you as you got older?

I went to a private all-boys high school that was known for sports. I tried out for a few different teams, but I never made the cut. I'd make it a few rounds into golf tryouts, or I'd get kicked off the volleyball team because I couldn't move around quickly enough. I'd always dreamed of my family coming to my hyped-up games, but it never happened during high school.

What kept you from channeling this frustration into action?

It was really a lack of willpower. Then, during my freshman year of college, I didn't really do much—just played video games all day, went to class, and brought food back from the cafeteria to eat in my room. Knowing that I wasn't doing anything made me feel guilty, which deterred me from taking action. It wasn't until the middle of sophomore year that I changed my eating habits and became more health conscious. 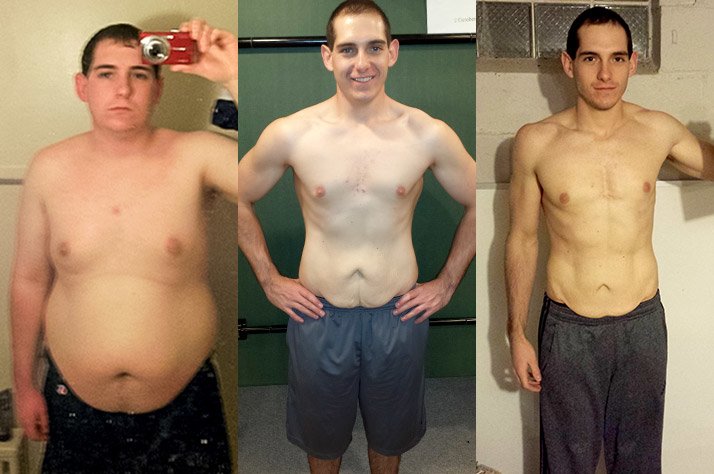 "After I went to the gym with my roommate, I thought, "Wow, this is all right. If I keep it up, who knows what I can do?"

That year, I happened to become roommates with my childhood friend. He was in the ROTC, and one morning at PT he screwed up his knee during a drill. I remember him coming back on crutches, unable to walk on his own but still saying "Well, I'm still in ROTC so I have to go to the gym or do something. I just can't sit here and do nothing." Seeing that was what led me to stop lying around and make a change.

How did you start your journey?

I was introduced to Bodybuilding.com right off the bat. My roommate showed me some sample programs and how he logged his training splits and the weights he used. Then, one day, I just went to the gym with him and thought, "Wow, this is all right. If I keep it up, who knows what I can do?" We ended up going every day after that.

Since you hadn't trained much before, what was it like stepping foot into the gym?

Starting off and training with someone who had lifted before was a little disheartening. It was weird to see someone lifting a lot more weight than I could. Having to change weight every set and remove a few plates so that I could go wasn't great for my morale. I felt like I was holding him back. 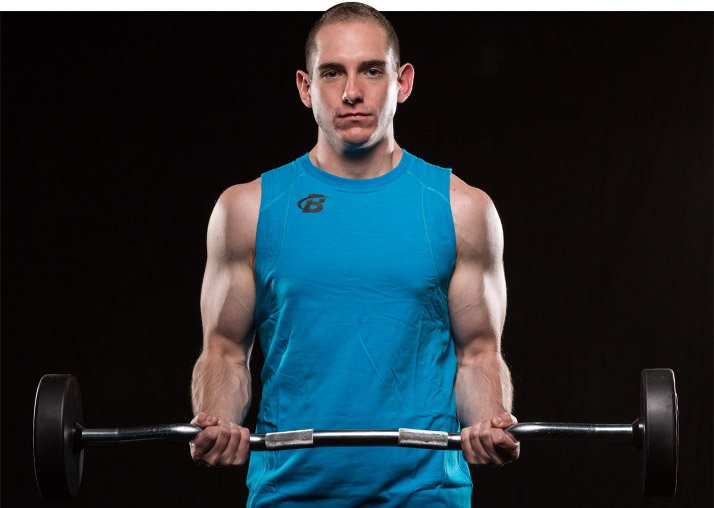 "I'd read articles on Bodybuilding.com and apply random exercises I liked to my routine. As time went on, my technique got a little more advanced.

Still, I knew change wasn't going to happen overnight, so I just focused on the future. Once I made peace with that, the process became a lot easier. I would miss a day here or there, but I'd never let them add up. By the third day, I'd be like "Wow, I've got to get back to the gym."

Was transitioning to a fit lifestyle immediate or more of a process?

I pretty much just jumped into it. Every time my friend would say, "Let's go to the gym," I'd grab my stuff, and we'd go. There really wasn't any hesitation on my end, especially in the beginning when I was starting out and eager to see a difference. We'd go every day, including Sunday. No days off.

From the start, we'd train specific muscle groups, but we didn't really follow a body-part split or a set program. It was chest one day, back and biceps another, and then some leg stuff. We read articles on Bodybuilding.com and just took random exercises we liked and applied them to our day. As we went on, we got a little more advanced.

How was your diet?

Honestly, it was a little bit better, but it didn't change drastically. I was in college and would just head to the cafeteria on campus for meals. They didn't always have the most nutritious items, so I had to make compromises, but at least I was more in tune with what I was eating. I might eat a really clean breakfast like eggs and whole-wheat toast but cap the night off with a scoop or two of ice cream.

When did you decide to kick things up a notch and become more strict with your diet?

I became more serious during the summer transitioning from sophomore to junior year. I started Jim Stoppani's Shortcut to Shred during the middle of that summer and lost about 25-30 pounds by the time school started. I pretty much stuck to his meal plan verbatim, which really helped a lot. The Turkey Swiss Melts were awesome. I still make those today.

Going to school can make meal prep harder. How were you able to stay on track?

I definitely credit a lot of my fitness success to my parents. I went to school 1-1/2 hours away from their house, so it was relatively easy to have family come up and visit. When they did, they took me grocery shopping so I could pick out healthy food that wasn't available on campus. When I did eat on campus, I chose healthier options like salad, spinach, cottage cheese, and post-workout chocolate milk.

Eventually, you hit a plateau. How did you overcome it?

In the middle of my junior year, I was falling off the wagon with my diet. Over the summer, I didn't go to the gym as much and got sucked back into my old habits. When I went back, I realized how much I'd regressed. 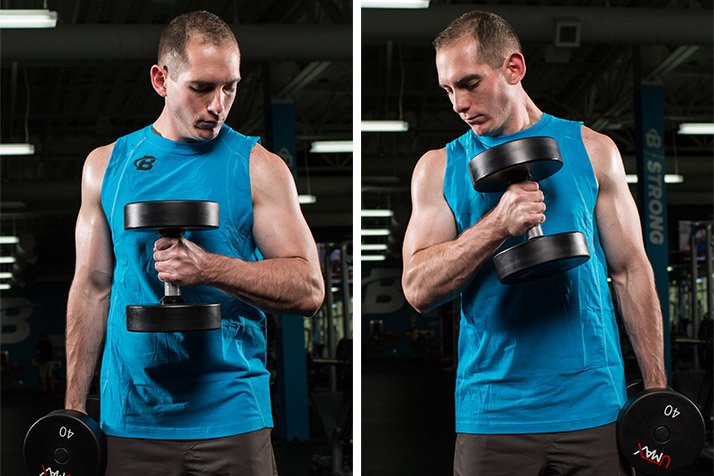 "I was inspired by athletes such as Greg Plitt and Cory Gregory. Their lifestyles are amazing, and they motivate me to continue training."

By the end of junior year, I still wasn't seeing any change, regardless of my efforts. It was hard. I knew that I'd have to cut back on weight if I wanted to lift, which was definitely difficult. My buddy was my motivation at the time. He was in the same position as me, and there came a point when we decided to stop being lackadaisical and get back into the groove of things.

Who else inspired you beside Jim Stoppani?

This past year, my lifting buddy and I went to the Arnold and ran into Cory Gregory. I was doing "Get Swole" at the time and, after I finished, I took some time to do my own thing. Now I'm trying to gain more muscle mass, so I'm doing "Get Swole" for the second time.

I love doing the program for a second time. The first time around, I probably could have tried a bit harder. By the time I came back for a second round, I was ready. I'm excited to see where this takes me.

Long term, I'd like to be a fitness model, but I realize that's pretty hard to do. My short-term goal is definitely to gain muscle. Down the road, I might want to do a physique competition. I also hope to bench 225, which is 30 pounds more than I do currently.

Are you ever worried that bulking will trigger your previous tendencies and lead you to pack on the weight?

Definitely. Before I started bulking, I had a noticeable six-pack, which was crazy to think about. Once I started bulking, the additional calories made me lose my definition. I thought, "Wow, I don't know if I like this!" I've had to beat it into my mind that if I want to get really muscular, I have to bulk. Sure, there are tradeoffs, but if you realize what you can probably look like after you cut from the bulk, it makes the decision a lot easier. 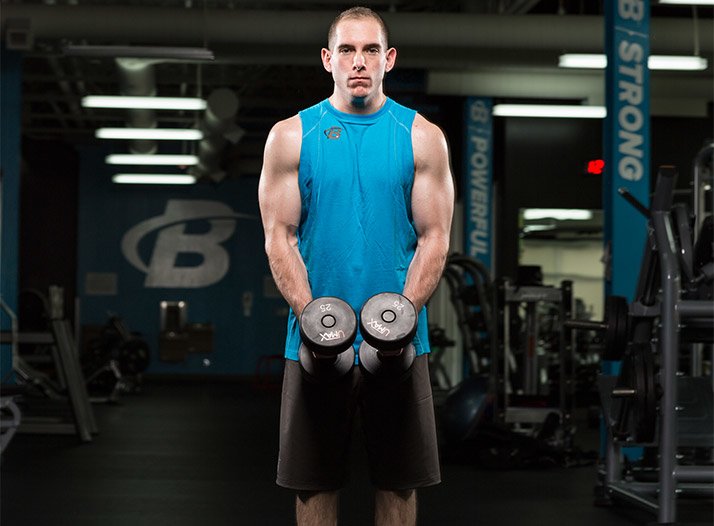 "The first time someone complimented me at the gym, I was caught off guard. It was a huge change from what I was accustomed to, but I'm loving it so far."

How did you feel the first time you saw abs?

It was great. I'm not going to lie, I loved getting compliments and stuff. That was definitely one of the main drivers to push me to go to the gym every day and take my diet into account. I liked the attention, which kept me from wanting to go back to sitting on the couch all day long. But just moving around and pushing weight also felt good and relieved a lot of stress.

Did people approach you or ask for advice as your journey progressed?

Yes, and it was pretty cool. The first time I went to my current gym, some guy came over and complimented me on my form and asked how long I've been lifting. At first I was caught off-guard, like, "Why are you asking me that?" It was kind of surreal. It was definitely a huge change from what I was accustomed to, but I'm loving it so far.

What advice would you give someone just starting out on their journey?

You definitely have to have a clear, focused mindset. You also have to plan out an attainable goal to make sure it happens. From my own personal experience, I can say that it definitely gets easier. If you keep your nose to the grindstone, you'll eventually get there.

Bring Me the Horizon
"Shadow Moses"

Bring Me the Horizon
"Shadow Moses"