Casey made history in 1971 by becoming, at 19, the youngest man to win the coveted Mr. America bodybuilding title. Recently he took time from his busy schedule to talk with me about his life...

Those who have a reasonable historical knowledge of bodybuilding will have heard of Casey Viator. Casey belongs among the pantheon of bodybuilding immortals based on his success both as a competitor and trainer.

Competitively, Casey made history in 1971 by becoming, at 19, the youngest man to win the coveted Mr. America bodybuilding title. He won the Junior Mr. America four weeks prior to this historic win.

Casey trained hard over subsequent years, and claimed both the Louisiana and Pennsylvania grand prix titles in 1980. He capped off a stunning bodybuilding career with a third placing at the 1982 Mr. Olympia, ousting bodybuilding luminaries such as Samir Bannout, Tom Platz and Albert Beckles.

Having established himself as one of bodybuilding's greats in addition to becoming a world class trainer, Casey has been called upon by many for excellent bodybuilding guidance. He trains thousands of people world-wide and has taken time from his busy schedule to talk with me about his life. I'm sure Bodybuilding.com readers will enjoy what he has to say.

[ Q ] What are you doing these days Casey?

Working hard on my second book and training bodybuilders all over the world with my internet training program. And basically having lots of fun in sunny Florida.

[ Q ] Sounds like a great lifestyle. How would you describe your current training and dietary practices?

My training is still intense. A healthy maintenance way of training and dieting. Still benching 500 pounds and squatting 600 pounds, it's turned into a way of life for me.

[ Q ] You won the Mr. America at 19 with muscle size uncommon at that period for someone so young. How did you gain this phenomenal size at such a young age?

I trained with great intensity back then, and had a lot of insight from all the big pros like Sergio and Arnold. Arthur Jones was there to push me along also. 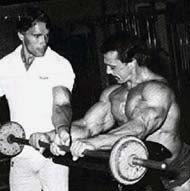 I caught on very quickly.

[ Q ] What inspired you to begin bodybuilding Casey?

I just seemed to grow doing regular sports, track and field, baseball, my arms and legs grew just from running and hitting baseball's, so naturally I was pulled toward training with weights. I responded quickly, and the rest is history.

[ Q ] In the 70's you trained with Arnold and Frank Zane. What were these two Mr Olympia's like to train with? How did there personalities enhance your training?

Actually I was the young kid around them, but a big young kid. I got plenty of respect from all of them. Especially when the big weights started to be loaded, they would just shake their heads. I really love to attack heavy weights, it's a challenge for me, 30 years later I'm still the same way about training.

[ Q ] Describe, if you can, the bodybuilding culture of the 70s. How does it differ from today's bodybuilding scene?

It was a bunch more laid back then. The bodybuilder's of today have to do such extreme chemicals just to get close to the top.

"The future for healthy bodybuilding looks grim, at this point."

I don't think I would want to go that extreme, and put my health on the line. There should be a healthy life after competing, I've seen a bunch of tragic cases just lately. The future for healthy bodybuilding looks grim, at this point.

[ Q ] Bodybuilding does seem to be more about the business of winning nowadays. You obviously feel that health should be a main goal. What are your main goals Casey?

To live to a healthy old age and still function as I did in my youth.

Also to keep helping people to reach their goals. It's very satisfying and rewarding.

[ Q ] Your personal fitness business seems to have done very well, possibly based on this attitude to helping people? How many people are you training at the moment? Any high profile names?

Currently I have 3000 active members from Russia to France.

They check in with me every 3 months, to make sure their gains are progressing.

It's quite a job, I've become quite a computer nerd and my work keeps me on line at least 7 hours a day, but I really enjoy it. I have plenty of high profile names I work with.

I really can't hand out their names, it's a privacy issue, and I respect that.

[ Q ] Who in bodybuilding, past and present, impresses (or has impressed) you most? Why?

In the past Sergio and Arnold, impressed just through their shear size.

The present? Dorian Yates and a few others impress the hell out of me. They went to the next level, with muscle mass and definition.

[ Q ] Most beginning bodybuilders want to gain a tremendous amount of size before focusing on refinement. What would you suggest in this instance?

Most of the people I train do cardiovascular work at least 3 times week. It brings a certain kind of hardness, and quality of muscle, you cannot get from anything else.

[ Q ] What interests and hobbies do you have Casey?

I love to deep sea fish. I have a boat and go out long distances to catch the big ones.

There is something very relaxing about the deep blue sea. If you can't find peace out there, you will not be able to find it anywhere. I also have a Harley Davidson and get a bunch of enjoyment out of riding.

I think the 1971 Mr. America win at 19 years of age was probably the best thing.

Also winning my 2 IFBB Pro grand prix's in 1980 and beating many top names was also a great thrill.

[ Q ] Yes these are significant achievements. Finally Casey, what are your thoughts on the future of bodybuilding?

I'm a little concerned about the large amounts of chemicals these guys are using, and I hope, somehow it can be toned down in the future.

It hurts to see these guys ruining there health, just for cash and trophy's. There is a wonderful life after competing if you don't damage your insides too much with chemicals.

[ Q ] Sounds like good advice. Is there anything you would like to add that hasn't been covered in this interview?

I want everyone to visit www.caseyviator.com, I have many things that people can benefit from.

Thank you very much for your time Casey.