The Distance Dilemma: Why Long Runs Aren’t The Fast Track To Fat Loss

Long-distance cardio is great for overall health, but it’s not the best ticket to an incredible “after” photo. Learn why you should pair logging miles with lifting weight!

Summer is staring us in the face again, which means it's time to lace up the kicks, get off the couch and start training for charitable 5Ks! Prepare to join a committed crowd congregating around treadmills, nature paths and roadsides in preparation for the main event.

Aspiring runners set long-distance goals with friends or spouses, usually starting with a 5K, to accomplish underlying ambitions. The thought of raising money for charity motivates people to stick to their goal. Most focus on finishing, some on winning, and others are just happy to race. Why are you running?

I sit down regularly with clients to hear their goals. Most express an innate desire to lose several pounds and run a long-distance event simultaneously. When I ask which is more important, they often say losing the weight. Bingo!

We've long been led to believe that jogging, cardio and aerobics are meant for fat loss, sending people off into the sunset with an unattainable end point. People fail to realize this method may be inherently flawed.

It's True: long distance runners, particularly professional athletes, don't have fat weighing down their performance. You also notice they possess little muscle mass as well. Why? The body uses both muscle and fat for long-distance fuel.

Over time, distance runners drop overall weight, both muscle and fat. The kicker: muscle depletion slows the metabolic rate, which ultimately slows down your fat loss!

This simple model shows how important lean mass is to the fat-loss equation. Many view running in a short-term window to shift their weight.

When their running regimen ends, they revert back to poor eating habits and dormant activity levels, failing to realize it's impossible to maintain that level of activity and nutrition.

Consider what happens when someone sheds a fair amount of weight (including some muscle), stops going to the gym, loses motivation to run, and resumes unhealthy eating.

Typically, the weight comes back due to a slower metabolism from the decrease in muscle!

Jogging starts slow. The first attempt might be 10 minutes, then 15, 20, 25, 30, 40 … up to roughly one hour or longer. At that point, people plateau, become bored and quit. Those who continue encounter a problem: time restriction.

Most runners hoard an hour away for exercise - some a bit longer, some a bit less. People often don't have extra time, so they're forced to manipulate other variables.

For example, they might run on an incline to make the session more difficult and target different muscle groups, or sprint short distances instead of jogging for time.

In the end, anaerobic (without oxygen) training through strength and resistance is better for fat loss than aerobic jogging. Anaerobic training speeds the metabolism and keeps - or enhances - lean mass!

Long-distance running can lead to fat loss, but it's not great on its own. Different methods need to be implemented for the 9-to-5 desk junkie living a sedentary lifestyle. Modern living unfortunately doesn't allow for hours and hours of running.

The Fix: Elevate the metabolic rate through anaerobic regimens carried out in short periods of time. Long-distance cardio has various health benefits, but it should be done with less frequency and paired with resistance training.

Switch your next distance run with one of these protocols: 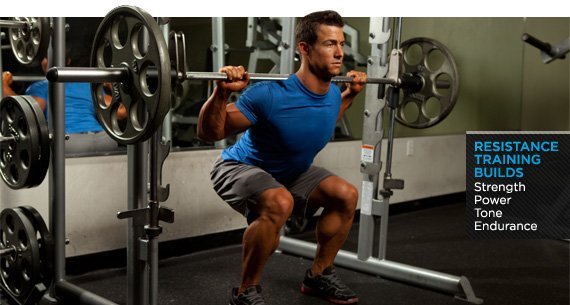 Spending hours on cardio equipment facilitates overall weight loss, but eventually progress halts and you hit a plateau. If this happens to you, change your program.

Remember, easy is not good. You adapt, meaning your body is able to complete the exercise by expending less energy than it used to. The goal is to burn more energy (fat), so you MUST work differently!

Running supports a healthy heart and set of lungs, which is important, but those variables don't have before-and-after shots for indicators of progress. Millions of people run long distances and are still overweight.

If you really want to cut fat from your gut or butt, reconsider long-distance running.

Alex spent a great deal of time training for sports and has continued to follow his passion. Learn more about him here.