CT Fletcher: Bigger And Badder Than The Rest Part 2

Why fight it? You know you want more CT Fletcher in your life. If you're one of his 'iron addicts' or want to challenge him to a bench battle, read our second interview with the man himself!

In just under two years, the 54-year-old former world bench-press champion has become the fitness world's premier guilty pleasure, an obscene eruption whose videos simply demand to be watched, shared, imitated, and quoted.

His training partners, family members, and his YouTube channel, have all become icons of a training style that has no patience for limits or categories. Strength or size? Yes, please. How many reps? Don't ask. You go until you can't do any more. Until then, ISYMFS.

Given the immense confidence he projects, it can feel like CT has always been a success. In actuality, his path to celebrity was as long and circuitous as that vein on his biceps in the video "I Command You to Grow."

From the comfort of a parked car in his hometown of Los Angeles, CT recently talked with Bodybuilding.com about his rise to fame, his mission, and why you need to sign up for basic training if you want to develop his gift of gab.

Q
Less than two years ago, you were "The Strongest Man You've Never Heard Of." What has your rise to fame taught you about yourself?

It's been unbelievable, because there was no YouTube in my day. I pinch my motherfuckin' self every day, and I still can't believe it.

When I had open-heart surgery (in 2005), I lost my job at the post office, where I worked for almost 30 years. I lost my job, I lost my home—I lost everything. And at first I was walking around like a bum, jobless and homeless.

But I just had faith in God that it was going to happen. I didn't know how, but I just had a lot of faith, man.

When did you finally look at yourself and say, "Alright, I'm back now"?

I still don't think I'm really back. I have a whole lot of things that I still want to accomplish. I still have a mission; I still have a "magnificent obsession." It just changed a little bit from what it used to be when I was younger.

My magnificent obsession when I was younger was to be the strongest man on the planet and to have the biggest arms on the planet. Now I just want to reach as many people as possible and let them know that there is hope. 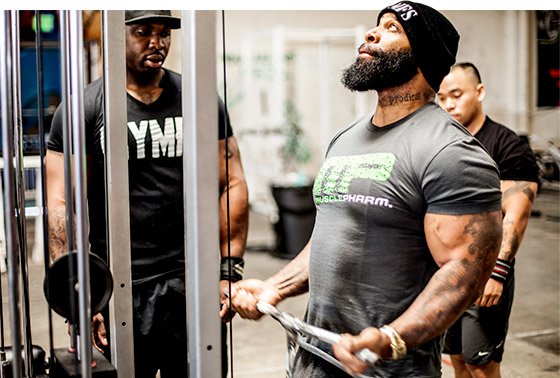 "My magnificent obsession when I was younger was to be the strongest man on the planet and to have the biggest arms on the planet. Now I just want to reach as many people as possible and let them know that there is hope."

You're doing more videos these days where athletes train with you— Dana Linn Bailey, Kai Green, and Frank Medrano, for instance. What does it mean for someone to train with CT Fletcher?

I want them to know that whether it's Kai Greene or Joe Schmo who nobody knows, I'm going to train you the same fuckin' way. Women, men, male, female, a donkey, a monkey, or whatever the fuck you are, if you train with CT Fletcher, I'm not going to have mercy on you.

As long as we're in the gym, I have a job, and that is to kick your ass—and I'm good at my job. Once we get outside the gym, man, we can be buddy-buddy and slap each other on the back and tell each other how fuckin' great we are. But when you sign up for a session with me, expect to get your ass kicked.

Talking about your style, I've seen you say that you "talk shit for a living." Where did you learn the skill of talking shit?

Yeah, I consider it a skill. Everybody knows I'm a veteran of the United States Army, and some of the best shit-talkers on the planet are drill sergeants in the U.S. Army. I learned a lot of shit-talking skills from them, and from my family members.

So Junior Miles said more than, "Everybody shut the fuck up?"

Oh yes, he said a lot more than that. I really wish I could get him on tape and interview him so everybody could hear the guy's story. He's got one hell of a story, but he wants to stay low-profile.

People seeing your videos for the first time are always surprised to learn that you're over 50 years old. When was the last time you really surprised yourself in the gym?

I'm glad you asked that. I get challenged all the time—all the time. People challenge me over social media and youngsters actually challenge me in the gym. I'm never surprised at what the old man can still do, because I pride myself not just on my physical strength or my physical capabilities.

Sometimes I'm tired or I don't feel good, and if I just went when I felt like it, then I would make very few trips to the gym. But like I tell the kids, there's so much more to it than just the physical being in here. It's a mindset—my mentality.

When the kids challenge me, my will kicks in and I'm able to perform in ways that I couldn't do it just on the physical. I have to kick in to the will. Once I tap into my will, then I'm ready to go. "Come on youngster, let's go. Let the old man teach you a motherfuckin' lesson about respect!"

I know one day it's possible, maybe when I'm 83 or 84, that one of these young punks will be able to take the old man on. I can't bench press 600-700 pounds anymore, but I changed my training to repetitions, and man, I'll rep with anybody.

Bigger, Badder Than The Rest

CT Fletcher knows a thing or fifty about building monstrous biceps and triceps. Think you can hang? Get ready to command your muscles to grow!