Whenever the name CT Fletcher comes up in conversation among lifters, favorite quotes are sure to follow. "I command you to grow!" someone will shout. "Curl that shit!" someone else will yell. "Next stop? Mount Bicepius!" "I look for you, pain!" "It's still your muthafuckin' set."

CT Fletcher is a six-time world champion powerlifter who trains at Metroflex Gym in Long Beach, Calif., where he works as a personal trainer. CT admits that his fondest memory of powerlifting was in 1995 when he attempted a drug-free 705-pound bench press at the Baddest Bench Press in America Contest - no big deal for the "Superman from Compton."

After his strength-training days, Fletcher hit a major turning point in his life when he underwent open-heart surgery in 2005. After taking two years to fully recover, he's adopted a "fuck average," "king of the beasts," sidewalk-cracking, lift-everything mindset. There's no middle ground for CT. He believes you earn gains through hard work and hardcore training.

At 54, CT is just getting started. Rather than sit on his laurels, he proves that age is only a number, and that a higher number equates to more experience and even more intensity. Search for CT on YouTube and you'll find a plethora of colorful and inspirational training videos, but you might wonder: What music inspires CT? Read what the man has to say. 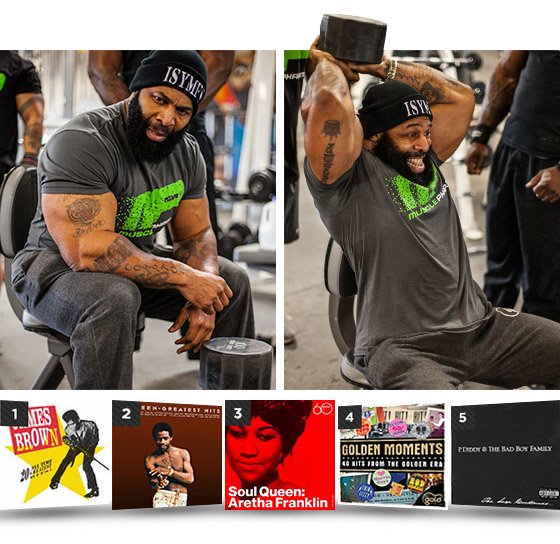 CT, what part does music play in your workouts?

I've got so much going on inside my head?like a huge, full-out war?that music is usually blocked out. I'm just totally focused on the workout, but if I do listen to something, it'd be something old-school like James Brown. I get so fired up when I hear him. Aretha Franklin and some Al Green are right up my alley, too. That's what I still lift to today if I've got music on when I train.

If you had to choose one album to listen to for the rest of your life, what would it be?

Which lift PR are you most proud of?

Without a doubt, it's got to be a bench press PR when I bench pressed 705 pounds without a bench shirt in the gym. I did that at American Eagle Gym in Norwalk, California.

What or who inspires you to do your best?

Muhammad Ali, hands down. I was a poor kid from Compton growing up, and I looked up to him. He was the original trash-talker, and you know I'm all about that. What he did inside the ring was great, but what he did outside the ring is why I looked up to him. He wasn't afraid to go against the grain. He stuck to his guns and what he believed in, and that left a big impression on me.

I Command you to Grow! Biceps/Arm Day with CT Fletcher
Watch The Video - 07:19

Chady Dunmore is a pro fitness champion and athlete who brings new definition to the word multitask. Check out these 15 Instagram posts!

Load up on new training tunes with this playlist from MusclePharm athletes Flo Rida, Cory Gregory, and Chady Dunmore. Log into Spotify and listen up!

Today, we honor fashion and fitness. Check out these 15 shredded BodySpace members who are making their jeans proud!