Call To Arms: Kris Gethin Prepares You For Battle

If you want to know what it's like to train like a madman, take a page from my notebook. These are the thoughts I'm scribbling in lead before I demolish with iron.

As I age, I get increasingly frustrated by estrogen-riddled boys posing as men. They claim to be men, but they cry that the reps hurt, that they don't have time to eat, and those sniffles prevent them from training. Are you a real man or one of these false man-children?

No matter what's happening in your life, there's always a choice. Lift the f#cking weight from the floor, or leave it on the ground. The thoughts are supposed to be daunting. The pain is meant to be tormenting. Yes, your body will convulse in defense. Don't tell me you thought this was supposed to be easy.

If you think building muscle is easy, I bet your petticoat that you're one of the particles making up the pollution of accusation, yelping that everyone else must be on "the gear" because they're bigger, harder, and more vascular than you. If that's the case, I'll whip it out so you can claim that I've been shooting Viagra, too.

I can't relate to people who go through the motions and remain "okay." They have zero expectations; they're ripping themselves off. These faint little fools should be banned from the gym and made to attend "Man Camp" for a diet of concrete in order to harden the f#ck up. Keep them quarantined until they can prove they've experienced real failure. If we don't do something, these pansy growths of fungus will spread to other uninspiring men who will create more ratings for Two and a Half Men.

Do What You Fear

Carry on performing your reps for weakness and waste. And between sets, spend even more time blowing kisses at your reflection. Gyms were built to mold men, but I've only witnessed men being tamed into lame house cats. I grind my teeth as I watch them slip further into cocoons of vegetarian salads and conversations of last night's Desperate Housewives. 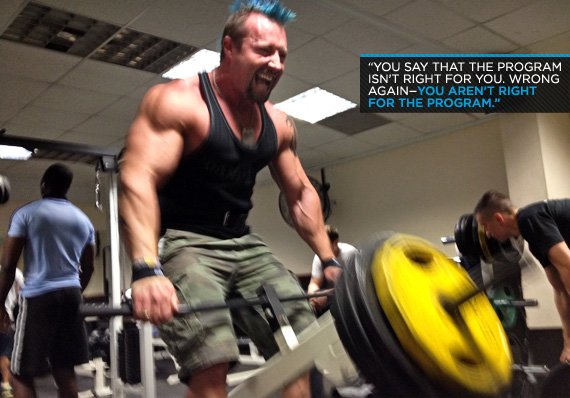 I can't help but care. They shouldn't be content with their mediocre existence. And they shouldn't be asking me how to evolve if they have already decided to go extinct. You can "get by" on a desert island. Go reside there. I'll live in the free weights area where my killer instincts can grow. 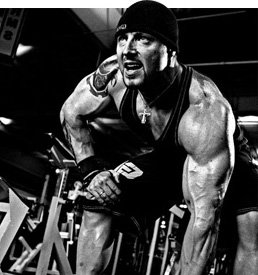 Cities and society have forced men into hibernation, under thick layers of personal insulation. Only when you have put your body through battle will you know what it means to be a real man. Most of the brutalities I witness are the dull training sessions of lesser men. The disco music that accompanies the commercial gym atmosphere is fitting to them—it's the soundtrack of a dying masculine culture.

I survive and evolve on my terms. I don't need a training partner to define me. I define me. I watch these petty routines to nourish my strength. It's the great escape. Lift against the gravitational pull, pull away from the social clutches, socialize with resistance, and realize this resistance is no burden.

The contraptions stacked with iron promise freedom and growth. Fight the negative and embrace the positive. Your program is the mutually-bound application and legal document of torture. Be the bully, dip your body in lactic acid, fight your fibers, encourage panic, and be the best you.

Control your environment, don't be controlled by it.

You Can Be A Fit Role Model