Kelly is spending her time in the Clark County Detention Center along with husband, Craig Titus on charges of murder... I've put together this update about how Kelly is doing and some responses from the last interview. Read on for the update.

While the 2006 Olympia weekend was in full swing in Las Vegas, top IFBB Fitness Pro, Kelly Ryan (Flyin' Ryan) was unaware the biggest contest of the year was going on where she had been in undeniable title contention year after year.

Kelly is spending her days and nights in the Clark County Detention Center along with her husband, IFBB Bodybuilding Pro Craig Titus up on charges of murder and kidnapping.

They do not get to spend time together or see each other in person... they get 1 phone call each week for 30 minutes on a monitor screen. Kelly assures me they are strong in their love and commitment to each other as husband and wife. Their trial date is set in January 2007. 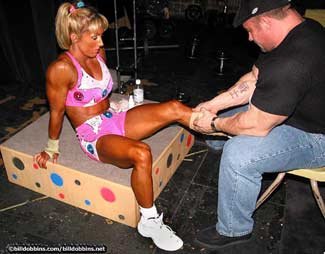 Since my last visit to Kelly, I was overwhelmed with the swing of comments that came to me about the article on our visit.

First and foremost, Kelly and I are girlfriends. I visit her to support her spirit and to let her know she is not forgotten.

Kelly has kept up with her calm, clear and uplifting attitude.

She looks beautiful and is full of the word of God and her purpose to remain of help to her fellow inmates in the woman's area. Kelly feels positive and a calling for action to coach others in making the best of things in the space she is in at this point in her life. 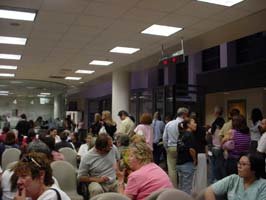 We all live in communities and after all, this life Kelly is living is just another community. I am certain this type of community was not what Kelly would have chosen or hoped for however, I can tell you Kelly has always shined the light wherever she has been and this is no exception.

Click Image To Enlarge.
"Kelly Has Kept Up With Her Calm,
Clear And Uplifting Attitude."

I had the article that was printed in Bodybuilding.com copied from the web site and mailed to both Kelly and Craig to show them what had been said. They do not have Internet access although they can receive magazines and mail. The magazine publications are not always as up to date and highly censored so the information may not be as accurate as the websites we are all accustomed to going to for information that is right here right now.

Kelly did know and gave me permission to write about how she was and that this next visit would be an update. I tell her everything of my intentions so we are clear as friends. I have received letters from both Kelly and Craig and I have gotten many requests for their address. Yes, they can receive mail and the address can be found at the end of this article.

During this visit, Kelly was so unselfish. All she wanted to do was ask a favor of me. She wanted to know if I could please give the women who have been sharing her new life with her a voice in the media as well! Amazing.

I asked her to have them write something on how they have been training with her, on how Kelly motivates them and their new ways of goal setting during the exercise breaks and mail it to me. This should be incredibly interesting.

Kelly kept asking how I was, what I was up to and to tell me she and Craig were praying for ME! She said they knew I would be a target for the haters after the last article and they were right.

Responses To The First Article

Because of this extremely sensitive and sensational case, there were very mixed reviews from the bodybuilding community fan base. Kelly and I do not speak of anything to do with the case. It is not allowed and visits are highly monitored. We simply visit.

I was astounded at the amount of negative feedback attacking my view on everything from my friendship with Kelly all the way to anger on how positive she was doing in the worst of circumstances imaginable.

On the other hand there was tons of support and positive feedback on E-mail and face to face during the Olympia weekend when I was there with Bodybuilding.com.

I was approached day and night by everyone from Lou Ferrigno to fans I didn't even know yet from this industry of Bodybuilding and Fitness to "thank me" for "what I did for Kelly" which was really just to tell the truth and be her friend.

One of the worst E-mails I received was from a doctor who thought Craig and Kelly should be as miserable as possible in jail forever. He hated the fact that I reported on how healthy Kelly looked and sneered at the fact of Kelly's bible affirmations she had been training the women with during exercise breaks. Here is another completely negative sample. There were many more in this same strain accusing me of "not being the right type of friend" or reporter.

"I was appalled after reading your article. Maybe you have not realized that one person lost their life and two others will probably spend ther rest of their lives behind bars. This first sign of this was when you used this tragedy as an opportunity for a cute little photo shoot in a prison. Then you spoke of "supposed healthiest of industries" which is so far from the truth it can't even be considered a humorous statement. Anyone remotely associated with the competitive fitness/bodybuilding scene knows that drug use (both performance enhancing and recreational) use is rampant.

This has reached epidemic proportions - is our sport - where careers are cut short due to organ failure or long prison terms. Lastly you spoke of how well Craig and Kelly are doing. If there is any justice, these two people will spend the rest of their lives behind bars and away from each other. I hope that you spend the time to read this email, not that you will change your beliefs or lifestyle, but that you will realize how wrong it is."

The positive responses I received far outnumbered the responses from the haters. Below are some wonderful, encouraging outlooks from people who were glad and relieved to hear about how Kelly was doing.

"Thanks for the article and encouraging words on Kelly. My name is Michael and I work as a chaplain in the pro bodybuilding industry under the banner of "Stronghold Ministries." I have gone to see Craig and Kelly in jail once a month since April. Isn't it amazing what God is doing in their lives?

In such a difficult circumstance, God has given them both his joy and peace. Amidst all the speculation that has gone on with the trial and all of the negative comments from people, it was refreshing to read the truth about what is really happening. May God bless you for this."

"Thanks for your article. It really helped me feel better inside. I have always been so uneasy on how she was doing. She had always been so nice to me when her & Craig came up for all the local shows up here, she knows all my injuries and would ask me about every single one when she saw me...very very very kind woman who I considered a friend."

"Brenda, all I can say is >>> fantastic!!!!!!... I felt so good reading that kelly is doing well, I actually had tears running down my eyes...Kelly Ryan Titus is the sweetest girl in the sport and was so nice to me I cannot begin to express my respect for her...personally I don't think she has a bad bone in her body...Brenda, you did a great job, you had me gagging & speechless (that's hard to do with me)...if you talk to Kelly or Craig please tell them both I wish them only peace & love in their lives... if there's anything I can do to help them, please ask...

Thanks again and props to you as well as respect for sticking by a friend... In fact you showed the world that your friend Kelly Ryan Titus is not a monster, that your friend Kelly is a human being trying her damned hardest to survive this hell she has been living in... Hey, you did the right thing Brenda, don't you dare second guess yourself, or let anyone question your loyalty to your friend Kelly... You look anyone who gives you grief about your story dead in the eye and you tell them to go to hell... fact: a true friend who has access to the media will use that to show the world a sensitive side of their friend... I'm now a Brenda Kelly supporter, you still got me gagging over here...

Best wishes from me... Gregg Valentino (aka Ramblin Freak) - muscular development magazine... The most misunderstood man in the sport... Way to represent!!!!!!"

I was also sent these wonderful words by Mother Teresa, which I treasure:

"People are often unreasonable, illogical, and self-centered;
Forgive them anyway.
If you are kind, people may accuse you of being selfish with ulterior motives;
Be kind anyway.
If you are successful, you will win some false friends and some true enemies;
Succeed anyway.
If you are honest and frank, people may cheat you;
Be honest and frank anyway.
What you spend years building, someone could destroy overnight;
Build anyway.
If you find serenity and happiness, they may be jealous;
Be happy anyway.
The good you do today, people will often forget tomorrow;
Do good anyway.
Give the world the best you have, and it may never be enough;
Give the world the best you've got anyway.
You see, in the final analysis of your life, it is between you and God;
It was never between you and them anyway!" 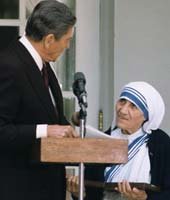 Click Image To Enlarge.
President Ronald Reagan Presents Mother Teresa
With The Medal Of Freedom At A White House Ceremony, 1985.

If you were to go to this facility, you might get a feeling of why I am amazed at Kelly's positive demeanor and peace of mind to sit there day after day for months and maybe years on end. Kelly's day starts each morning at 3:45 AM. At 4:30 AM, is breakfast when mealtime is called out as "Chow's on Deck"! Bible study is from 8-10 AM. 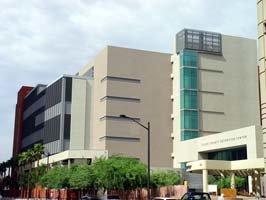 Most of Kelly's day is spent meditating and praying when they are locked down during the day. Exercise is in the evenings and her visiting hours are 3 days a week. Two are at night during the week and twice a day every Saturday. All visits are 1/2 hour.

When I asked her if she had a message for her friends, Kelly wished all of the Olympia competitive athletes a blessed weekend full of prosperity and prays for everyone to receive contracts and support from the industry.

She would like us to remember to control anger and strife and that we are we are meant to lift each other up.

My friend Kelly's spirit has not been broken. She remains true to herself and vibrant personality. In this most difficult time for her, I admire this more than words can convey and pray she keeps the faith she so sincerely seeks. 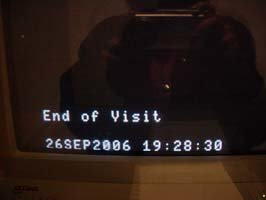 Take care of yourself. You're worth it.