Type 1 diabetes put Nich in a hospital bed for nearly a month. He recovered and discovered football, which required heavy lifting. See why this teen refuses to take 'no' for an answer!

I was a skinny-fat, mid-teen who knew nothing about lifting. I began lifting in November of 2010 on my 16th birthday. My mom got me my first gym pass in August, but I never used it. In November, I began lifting and was inconsistent, with poor training, dieting, and sleep.

Being a gamer, I spent countless hours a day on my computer doing mindless crap, wasting my days away. I changed schools in 2010. At my previous school, there was no football team, so when I came to my new school, I became very interested.

I began playing football, and two years later I went and played at the Provincial All-Star Senior Bowl where I got a lot of notice for my football career. I decided I wanted to stick to lifting and put all my energy and focus into lifting for aesthetics and bodybuilding. Staying fit and healthy is a goal of mine for life.

Nich stiff-armed diabetes on his way to the gridiron. 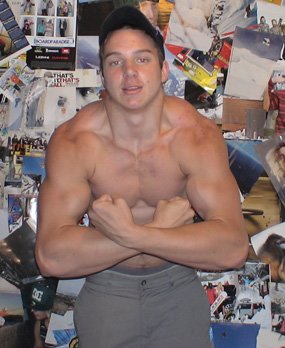 Motivation is key. You don't make "mad gains" overnight. Most people and friends in my experience quit lifting after a few months, because they're not seeing the results, but I understand why.

Either, they train half-assed, never breaking a sweat, begging the spotter to let them put the weight down, or they don't understand the art of bodybuilding.

I get motivation from bodybuilders such as Arnold Schwarzenegger, Ronnie Coleman, Lou Ferrigno, Franco Columbu, Kai Greene, and Zyzz (yes, I am a fan of the aesthetic lifters as well).

I also am very into music, I like anything from death metal, to hip hop, to progressive house and dubstep.

The key is motivation, surround yourself in it; engulf yourself in things that will keep you motivated. Friends, magazines, movies, and a good workout partner!

If you are living with a chronic disease, or any type of disease that you think will put you back, get over it, as harsh as it sounds.

Anything is doable; you just have to have the right mindset! You can do it! No matter what it is, there is a way! Rick Hansen did it, I AM DOING IT, and you can too!