Bill Woolsey hit a low point when he turned 40 and weighed in at 240 pounds. With a change to his lifestyle he was able to shed 70 pounds and sculpt his dream body. See how he did it!

I was into fitness and bodybuilding in my teens and early 20s. Then during my 20s and 30s I lifted weights and jogged off and on but the extra weight just snuck up on me. My diet was horrible.

I yo-yo dieted at that time and the top-end kept climbing higher and higher until I reached my all-time high of 240 pounds in 2007 at 40-years old.

I was sick of my clothes not fitting and being ashamed to take my shirt off in public. My blood pressure was high and I knew I needed to get all of this under control while I still could. 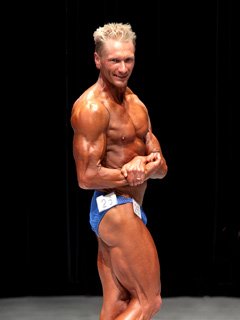 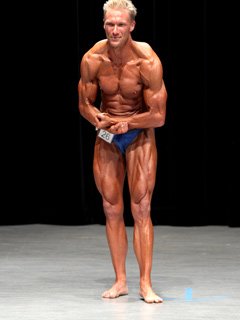 Click To Enlarge.
I Knew That I Needed To Get All Of This Under Control While I Still Could.

I lost the weight I had gained by doing full body training workouts two times per week, doing cardio (mostly treadmill) 3-to-4 times per week, and taking in fewer calories than I burned on a regular basis. I ate several small meals per day, each with a good quality protein source.

For the first time in my life I started to journal everything I ate. I was careful not to lose more than a pound a week because I didn't want to burn muscle or get saggy skin.

As I saw my physique transform over time from the weight loss program, I began to gear my workouts more toward gaining muscles and possibly competing in bodybuilding. I began splitting my bodyparts up (split routine) and doing weights 3-or-4 days per week. I usually did chest, back, shoulders, and arms on Tuesday and Saturday. Then I did abs, legs and calves on Wednesday and Sunday.

I wasn't sure what contest to compete in but I decided to compete in the 2009 OCB Circle City Championships just two weeks prior. I knew I was a few pounds over a good competition weight but decided to dive in and make the best of it. I dieted for two weeks and lost several pounds and put together something of a posing routine.

I realize this approach was ALL WRONG but doing it did help build my confidence. My performance and my condition were not optimal, but I was happy just to have competed and I knew I would do better in the future. I placed 5th out of 9 in the men's masters division and knew I would be back.

I frequently change my training split but always seem to come back doing my chest, shoulders and back in the same session. I do cardio year round but I increase it prior to competition. 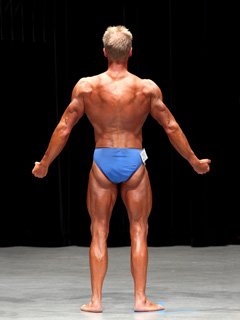 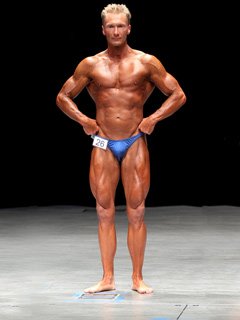 Click To Enlarge.
I Began To Gear My Workouts More Toward Gaining Muscles
And Possibly Competing In Bodybuilding.

Get on a good routine that is practical for you to do and stick with it for enough time to see results. If you are starting out, it will be hard for a while but commit to stay with it for at least a couple of months because by then that you will be seeing results.

It will get easier the more you stick with it and eventually it will seem like something is missing if you DON'T workout!

Your goals may also evolve as you achieve them; I started out just wanting to lose weight and now find myself trying to get in better contest shape each year!

Thanks to my wife Tracie for helping me keep my diet clean and being supportive. Thanks to all of the great people in our fitness center that also compete and have been inspiring and encouraging to me along the way (thanks Bob, Kalen, Melissa, Jason, both Jessicas, Eric, Kris, Cepeda, Ryan and all the others!).

Thanks to God, as I truly believe that with Him all things are possible!