Ask The Master Motivator: How Can I Boost My Training Results?

Are you still not getting the results you crave from your current workout program? James Grage has a solution to help you build muscle, boost strength, and burn fat for life.

Q
I've been following a new lifting program precisely, but I'm not getting the results I was hoping for. What am I doing wrong?

When you're training hard but aren't seeing the results you want, it's easy to blame your workout program or the genetic lottery. If you're in the gym for more than an hour almost every day of the week, you reasonably expect some positive visual change. You probably feel like you're doing everything right, which just leaves you to wonder what's going wrong.

Let's step out of the gym for a moment. Picture this: You work for a new company. You're amped to be there and go the extra mile every day. You're efficient and productive, and always take the initiative to go that extra step. Your efforts are recognized by your employer and, because of them, you quickly climb the corporate ladder. You put in the hard work, and it pays off.

Now, imagine overhearing one of your co-workers say he doesn't understand why you got a promotion and he didn't. He's been at the company just as long as you have, he's put in just as many hours, and he feels like he's just as deserving. You probably already know what I'm going to say next: Quantity does not spell quality.

While your coworker might have been clocking in and out at the same times as you, it doesn't mean they put in equal effort. Hard work isn't defined by how many hours you put in; it's defined by how productive you are during that time. The same logic holds true whether you're pushing papers or pumping iron.

Here's your challenge: Go to your gym around 6 p.m. and take a close look at the people exercising there. How many of them have intensity in their eyes and move with a sense of urgency, like they're going to blow past beast mode for the next 60 minutes? In all likelihood, you can count the hardcore trainees on one hand.

Now, how many people do you see in the gym simply going through the motions, doing the same routine as last week, waning in the energy department? This likely describes the majority. Some people talk between their sets, some are on their phones, some read magazines or watch movies on the treadmill, and some are just lift too light and underestimate their potential. 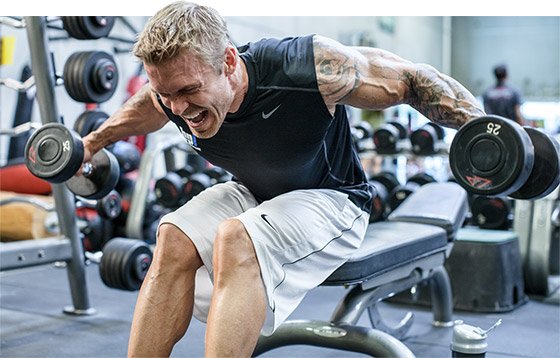 "Going just a bit harder each time kicks off a gradual progression, which results in increased strength and muscular development."

I'm not criticizing. It's easy to fall into this rut without realizing it. However, if you're on a mission to reach your peak potential, there's no secret meal plan or training methodology that will get you there. It's all sheer effort. You get out what you put in. If you want exceptional results, then you need to put in exceptional effort.

Here's the part where you tell me that you already give 100 percent effort, and where I challenge you to kick it up to 110 percent. Our bodies and minds adapt to our environment. This is great news for people who want to transform their bodies. You can enact change. All it requires is forcing your body to adapt.

How do you do this? It's as simple as doing more than you've done before. It requires you to push yourself harder each and every workout. Every effort counts. Going just a bit harder each time kicks off a gradual progression, which results in increased strength and muscular development.

Unfortunately, too many people don't know what "harder" feels like. They think they're pushing themselves because they don't have a good frame of reference. Simply put, they think they're putting in the necessary effort when, in fact, they don't even know their true capability. They have so much more to give than they've tapped into.

Even when they train consistently, most people who fail to hit their peak potential fall into one of two major categories.

The first group of people stick to their rep scheme like it's etched in stone. When you're repping out, what's your indication to stop? Does it strike you to drop the weight when you hit 10 reps because, well, that's when your workout plan says to stop? If so, then you're also probably picking a weight that you know you can definitely do for those 10 reps. While that's a great way to start, following that same program for months on end won't get you the results you want. To get bigger, you must lift heavier. 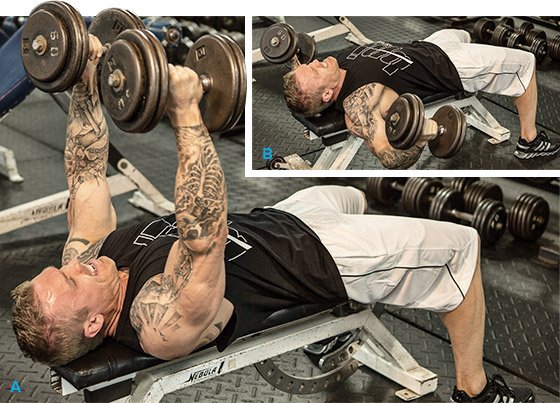 
It doesn't mean you put in the necessary work if you just go to the gym, check off your exercises, and count your reps. Workout plans and rep counts don't build muscle; pushing your body past what you've done before builds muscle. If you do what you've always done, you'll get what you've always got. To get something new, you have to do something different. Results come from pushing yourself harder than you've ever pushed before.

The second group of people find themselves stopping a set when their muscles start to burn. That little bit of lactic acid buildup is exaggerated in their brain as pain, and they stop due to the discomfort. Remember: no pain, no gain. Just because your brain senses discomfort and tells you to stop, that doesn't mean you can't do more.

At this point you're on the cusp of great results, but stopping just flushes them away. Push past the burn, and even learn to embrace it. Toughen up! There's at least another 15-20 percent more that you can give. Find your inner warrior. Find your guts. Shut up that "quitter" voice echoing inside your head. Dig deep and show some heart. 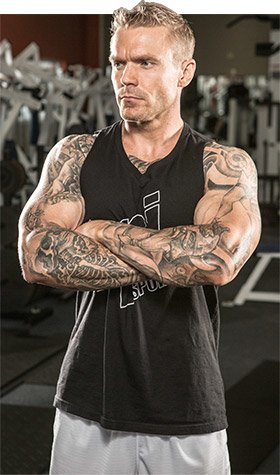 Mental strength begets physical strength. You need to know the difference between thinking that you're working hard and knowing what hard work is. You need to learn how to go for one more rep.

Sweat and effort in the gym lead to real, lasting results. Somewhere along the way, between the corporate health clubs, boutique spin classes, and spa-style steam rooms, we've lost track of what's important. I don't head to the gym to look pretty. I'm there to kick ass, specifically my own. I was lucky enough to learn the ropes in gyms that had no frills—an industrial garage where I forged a relationship with the iron.

My advice to you is the simple advice that was given to me when I first started training: learn to push yourself harder than you know how. Find someone stronger than you to work out with. You don't have to train with that person every day, but just do it enough to give yourself that point of reference—to feel what it's like to really push yourself.

If you don't know what it feels like to want to puke all over the squat rack, then you don't know what hard work is yet. Take yourself to that threshold and then push harder. Soon you will be that seasoned gym veteran, giving this same advice to the next lifter looking to crush it in the gym.

How Can I Stay Pumped For A Late-Night Workout?

With all the things that come up in a day, evening workouts can sometimes get lost in the mix. Learn how to stay on track and push through any workout, no matter the time of day.

BPI Sports co-founder James Grage survived a devastating car crash and rebuilt a competition-worthy physique against all odds. This is his story.

James Grage is the Co-Founder and Vice President of BPI Sports. He started training at age 15 and built an impressive body for sports.