Competitors in this industry spend a lot of time together. Sometimes, love blossoms backstage. This is the story of Brandan Fokken and Amber Orton.

Valentine's Day can be hard on people in the fitness industry. It falls right in the heart of transformation season, when many people have fit resolutions and clean eating atop their minds. But the holiday also gives rise to stories of romance that emerge from the bodybuilding ranks—tales of happenstance and chemistry and hard work. It takes courage just to stand on a bodybuilding stage, but last year Brandan Fokken took the ultimate kneel of faith. He asked Amber Orton to marry him on stage.

What Happens on BodySpace...

Brandan and Amber met each other on BodySpace. Both had previous connections with Bodybuilding.com. Amber competed in Boise, Idaho, for the 2012 Fit USA Contest. Brandan was a finalist for the BodySpace Spokesmodel contest earlier that year at the LA FIT Expo, where he became a member of Team Bodybuilding.com.

They shared contact info, then talked on and off over the next year, offering advice and support for contests, expos, sponsorships, training, and more. They finally met in person in Chicago at the 2013 NPC Junior Nationals. She was again on stage, and he was working a booth for Quest Nutrition. 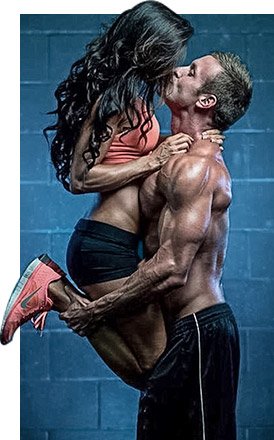 "We both knew what we wanted, so I think we just both knew it was going to happen."

"We talked throughout the weekend and really hit it off," Brandan says. "When it came to trophy presentations, I was asked to give trophies to the class before hers, which had one of my own athletes in it. While I was on stage, I asked if I could present to her class too, which I did. We went our separate ways after the show, but met up and talked again before we both flew out."

Brandan and Amber stayed connected online and on the phone. They met in Minneapolis, then later in Las Vegas for contests. They knew they wanted to be together, but it wasn't easy. Brandan lived in South Dakota and Amber was in Oregon. They repeatedly flew to meet each other, sometimes at home and sometimes in cities in between. Despite the distance, they never went more than three weeks apart.

Over time, Brandan knew he wanted to ask Amber to marry him. Amber had an inkling, as well. "We talked about the concept of marriage and what it meant to us and what we wanted out of a partner," Amber says. "So, yes, we had 'those' talks. We both knew what we wanted, so I think we just both knew it was going to happen." But, like contest prep, timing is everything.

Brandan started scouting for shows in her area that they could both compete in. The 2013 NPC Seven Feathers Classic in Canyonville, Oregon, looked perfect. He extended his contest prep to include a third show and cleared his plan with the promoters. They only asked if she would say yes. "I wasn't expecting that question," Brandan says. "Um, yes, I think so?"

He wanted to give her the trophy she earned, and asked her to walk out and give him his. He put his faith in his ability to make the top five and put his plan in motion.

In the video above, you can see Brandan whisper something in Amber's ear: "I hope you're ready for this," he says as he takes a knee, fumbling with the ring in his pocket.

Brandan had invited Amber's mother and older brother to attend the show. His sponsor, IFBB Physique pro Bill "Breadman" Sullivan, with P28 High Protein foods, paid to fly out Ashley Kurtenbach, Brandan's best female friend and a 2013 BodySpace Spokesmodel semifinalist. "She is like my sister, but is also my assistant. She was there to witness the event, film it, and be there for me. I am beyond thankful to both her and Bill."

Even though Amber saw it coming, she was still overwhelmed on that stage. "Brandan isn't the best at keeping secrets, which I find adorable," she says. "He pretty much gave me all my Christmas presents before Christmas because he can't keep anything from me. When he got down on one knee ... I will never forget that moment. It is such a blessing that it was all caught on video and in photos."

As Amber notes, bodybuilding, almost of necessity, can become a selfish sport. "The time constraints, the image, priorities, and obligations are hard in any relationship," she says. "They can take away from the other person. Since I have been on both sides of that spectrum, I believe the difficulties diminish with patience and understanding. Brandan and I do a lot of the same things and live similar lives, which is why we work so well."

Brandan and Amber eat the same type of wholesome foods. They both know what it feels like to get hungry, to grow tired, frustrated, and emotional. Those similarities brought the couple together in the first place, and those traits help them stick together. 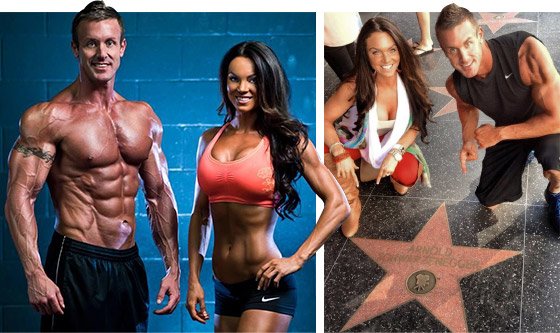 "Brandan and I do a lot of the same things and live similar lives, which is why we work so well."

"It's been nice to have someone who 'gets it' and understands all the things you are going through: appearing at events, training others, and competing," Brandan says. "You aren't pressured to steer off course, and you have the help of your partner to keep you accountable to achieve your goals."

This fit couple plan to marry outdoors in June 2014 in Sioux Falls, South Dakota, at Tutt Hill park. As the lead male and female athletes for Beast Nutrition, they'll be on the road together at shows and expos throughout the competition season. That's perfect, Brandan says: "That grants us the ability to work together, travel together, and experience a lot of things as a couple."