5 Reasons You Should Support Women's Bodybuilding

All bodybuilders are athletes. It's time we give the ladies the same respect we give to the men. Here are five reasons you should support brawny women! 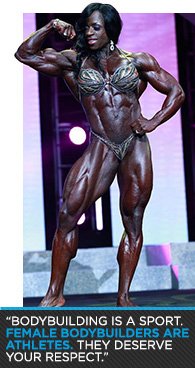 Female bodybuilders get a lot of hate. In fact, many women who blur the lines between what is "normal" masculinity and femininity are ridiculed for their "manly" bodies. Because female bodybuilders have more muscle than most men who don't train, they're laughed at. Instead of being celebrated for their hard work and intense dedication to a difficult lifestyle, they're regarded as "unattractive," "unnatural," and, worst of all, "gross."

I'm going to go out on a limb here and assume that Iris Kyle couldn't care less about how "sexy" she may or may not look to some dude in the audience. Gasp! A woman may not care if she's attractive?

Reality check: not everything women do is for men's viewing pleasure. Bodybuilding is a sport. Female bodybuilders are athletes. They deserve your respect.

Still not sure you can get past the whole idea of cheering for a woman whose biceps are twice as big as yours? Let me help you out with five observations:

Although a lot of women worry that lifting weights will make them bulky, the truth is that most women don't have the testosterone (or eat enough) to build mass to the same degree that men do.

As a result, female bodybuilders can do the same amount of training as men, and with the same intensity, without achieving the same results. In other words, women work just as hard but get less bang for their buck. Talk about frustrating.

I know, I know, "But steroids!" Clean or not, female bodybuilders have to do a lot of work.

If you've never perused the IFBB rules for female bodybuilding, you should. Male competitors don't have any limit to how big they can get. In fact, the bigger the better. Women, on the other hand, have to present a "muscular, yet feminine shape.1" "Femininity" is subjective—it's up to competitors to interpret the rules and then try to apply them. 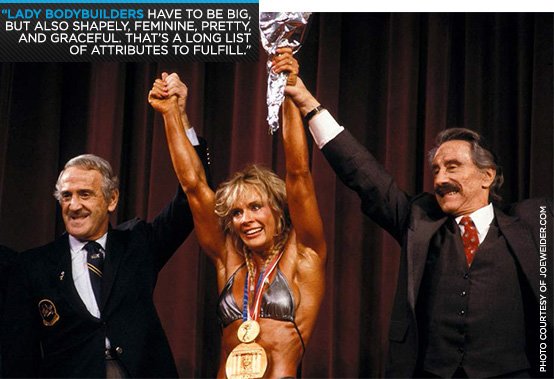 Besides putting on fake eyelashes and doing their nails, female bodybuilders have to make sure they're not too big. In fact, the IFBB regulations also state that for women, "muscular development must not be carried to such an excess that it resembles the massive muscularity of the male physique."

Lady bodybuilders have to be big, yes, but also shapely, feminine, pretty, and graceful. That's a pretty long list of attributes to fulfill.

3 / It's More Difficult for Women to Become Ultra Lean

For reasons having to do with reproduction, women are designed to hold 6-11 percent more body fat than men do. According to some studies, the hormone estrogen also makes it more difficult for women to burn fat2. So, not only do women carry more body fat than men, but it also takes more work for them to lose it.

Now, don't get me wrong—I'm not knocking male bodybuilders. But women have to fight their body to be rid of stored fat. The male body uses fat much more efficiently, and men's additional muscle mass expends more energy. For women, getting lean enough to see glute striations is probably more difficult than we fans can even imagine. 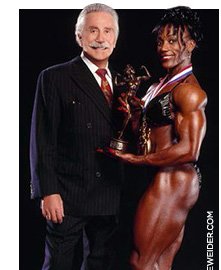 The stigma attached to female bodybuilding goes far beyond the steroid conversation. Our Western culture tells women to be skinny, weak, and above all, desirable.

Women who bodybuild are not weak, they're not skinny, and to most people, they're too masculine-looking to be considered desirable.

Sure, hardcore fans of the sport appreciate female bodybuilding, but the majority of people in and out of the fitness community feel discomfort with the blurring gender boundaries.

I would argue that female bodybuilders have the bravery to ignore the social standards of their culture and do what they love. To me, that's awesome.

5 / They're Breaking the Glass Ceiling!

Female bodybuilders are constantly showing the world what women are capable of doing. Women can be strong. We can have big muscles. We can be totally shredded. It doesn't matter what "parts" you were born with—you should be able to create the body you want, society be damned.

Agree? Disagree? Hit us up with your comments below!