Who needs a partner? Cellucor's Calum von Moger shows you his 3 favorite ways to blast past failure when he's training on his own!

Training to the point of failure is a time-honored way of giving your muscles a loud and unmistakable message to grow. It's definitely not easy—mentally or physically—to push to your breaking point, though. Your brain and body both scream at you to stop, and what was once a light weight suddenly feels like it's in danger of crushing you.

It's no wonder that some people feel most comfortable training to failure when they have a partner at their side. But when you're training alone, the need to push to muscle failure is just as important, says Australian pro Calum von Moger, winner of the 2014 Mr. Universe, and Team Cellucor athlete.

"I see people who train without a partner tend to limit themselves by setting a particular rep target, even though they can push a little harder," Calum explains. "When training for hypertrophy, going to muscle failure is important because it tears down the fibers even more. The muscles are then forced to adapt to this new stimulus, and this forces them to grow."

Calum says he finds training with a partner can give him an energy boost and promotes healthy competition, but he often prefers to train alone so he can be more focused. "You can really visualize and have a bit more of an intense, focused workout," he says.

Here are the big man's three favorite intensity-boosting techniques to push his limits when he's going solo in the weight room!

Though there are numerous variations to this technique, essentially it consists of dividing a set into segments, each separated by a very short rest period. For example, if you were doing decline machine presses with your 8RM—that is, a weight you can do for just 8 reps—you could perform 4 reps, then rest 20 seconds, do another 4 reps, rest again for 20 seconds, and repeat this work/rest protocol for 4-5 work segments.

All told, you'd kick out about 20 reps with your 8RM, a significantly greater number than you could do in a single straight set.

Calum's preferred variation is to bang out enough reps to bring him close to muscle failure—say, 7-8 reps with his 8RM—and start again after a short rest of just 10-15 seconds or less. "Perform as many reps as possible, take a brief pause, then continue to rip out more reps," he says." Sure, he won't be able to do as many reps on the succeeding segments, but the level of intensity is blazing throughout the set.

So how much do you reduce the weight on the drop? By about 20-30 percent, says Calum. Because the drop needs to happen quickly, it's easier on some pieces of equipment than others, and a little planning can pay off immediately. 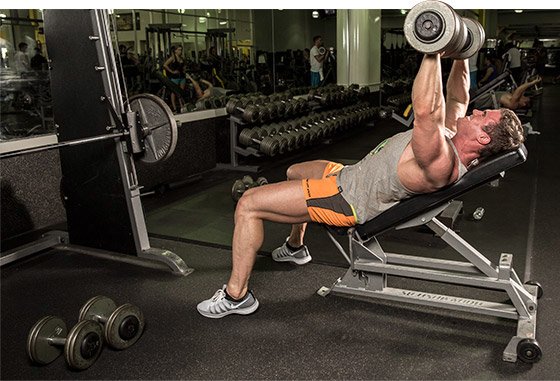 Have a second pair of dumbbells there with you, ready to go

Here's how to make it work with the most popular equipment:

Remember, if you're spending time searching for a pair of weights to use with a dropset after you complete the first half of the movement, it soon becomes a separate set rather than a dropset.

Because of the intense nature of dropsets—and how they'll effect recovery for your next set or exercise—Calum recommends doing them on your last set of a given exercise, or toward the end of your workout.

How do you measure your sets? In reps, most likely, but that's not the only way to do it. Time under tension (TUT) measures a set in seconds rather than reps. So a set in which you do 8 reps may take four seconds per rep (two seconds up, two seconds down), meaning the TUT is 32 seconds. But if that same set were done at 5-6 seconds per set, then the TUT would instead be 40-48 seconds. That's a lot longer to be supporting the weight—and more work, tension, damage, and contraction for your muscle to be subjected to.

Calum's recommendation: If you're training for hypertrophy and using your 8RM, slow it down and make each of those 8 reps last at least five seconds. When using your 12RM, each of those 12 reps should be 4-5 seconds. These durations will push your overall TUT to over 40 seconds per set, a benchmark many feel is particularly conducive to muscle growth. 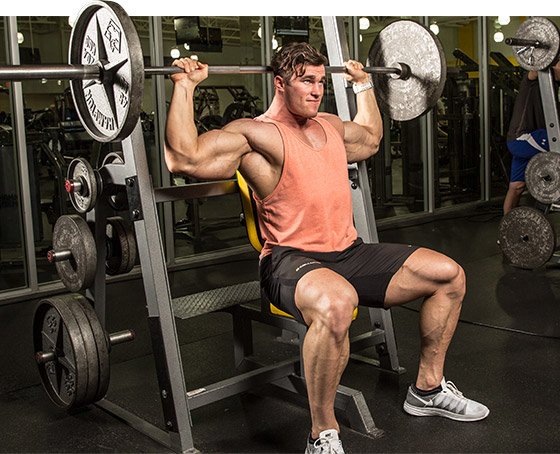 You could even just forget about reps and watch the clock throughout the whole set.

Remember, each rep includes not just the positive and negative motion in seconds, but also additional seconds if you hold the bottom (fully stretched) or top position (fully flexed) for a count or two. Calum also says he'll switch up how he allocates his seconds. Sometimes he'll lengthen the eccentric (lowering) portion of the lift and speed up the concentric (lifting), or vice versa. You could even just forget about reps and watch the clock throughout the whole set.

There are a number of different ways you can crunch the numbers, and they all lead to more muscle growth and the pump of your life!

Talking about muscle failure and training partners brings images of active spotting and forced reps. But the value of a training partner is often the emotional support they bring, pushing you verbally through those crucial final, grinding reps. To replicate that voice while training solo is the real challenge.

"When I train, I definitely have to play the mental game," says Calum. "It's important to recognize that a big part of training is dealing with mental barriers. You have to be aware that the mind gives up 90 percent of the time before the body does. When you recognize this, you're able to tell yourself that you can do more reps."

Expect it to take practice. But once you master the crucial skill of self-talk, you'll be better at training—with and without a partner—for years to come!

Calum Von Moger's Back Workout: Build A Massive Back

Looking to build a broad, thick, brick-wall back? Take on Calum von Moger's bomber back attack and implement his pro tips!