Tonight, the 50th Mr. Olympia kicked off with controversy and stiff competition. Stay tuned to see how it all pans out!

The 50th Mr. Olympia competition did not need any artificial hype. Without question, a half-century of this contest has produced the most dramatic and intense moments in bodybuilding history. The storylines always seem to write themselves. This year, the major question on most people's minds was, "Will Phil Heath make it a four-peat? Or will Kai Greene finally break through and dethrone Phil?"

While there was no extra drama needed this weekend, we got it anyway when the press conference became quite heated. To be frank, things were awkward and uncomfortable at times between Greene and Heath. Most rivalries in bodybuilding have included some trash talk, but much of it has been tongue in cheek, with friendly handshakes and back-slaps backstage. This was not the situation with Heath and Greene; fans witnessed two top-level competitors who genuinely do not like each other.

While Heath and Greene dominated the stage, Dennis Wolf loomed over the top spots as well, having improved yearly. Shawn Rhoden could also push for a chance at the win, having possibly the only aesthetics that can rival the champ. And Dexter Jackson is impossible to write off; he simply refuses to go quietly.

The action did not disappoint. 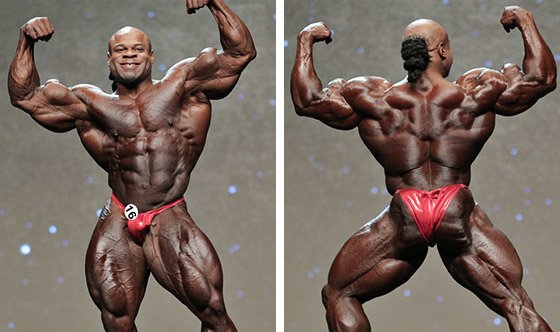 First thing first. Kai Greene has always been up and down on his conditioning, but tonight he absolutely brought it. One could argue he was the leanest guy in the building, and I would agree. But, despite his abs seeming a bit smoother in his initial posing routine, Phil Heath was a close second. 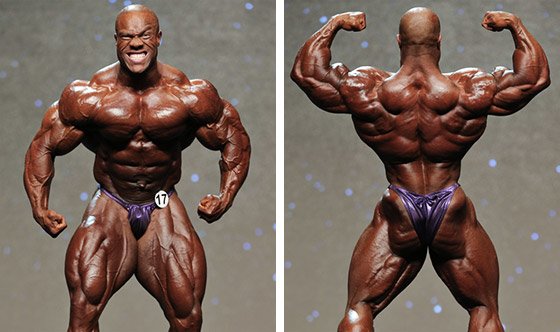 Shawn Rhoden looked great, but from the beginning it was clear this was a two-horse race between Heath and Greene. In my opinion it's extremely close and difficult to call. However, I still lean towards the reigning champ because of his structure, aesthetics, and conditioning.

This callout brought back memories circa 2007 when Dex, Branch, Wolf, and Victor all shared the same callout. I favored Dexter in this callout because of his symmetry and tightness coupled with a slight increase in size from the previous year. Wolf looked good—maybe even improved—but these guys always push to improve. Big Ramy looked better earlier in the night but seemed to fade during the callouts. This was also a nice resurgence for Branch and Victor, both of whom had a rough year and are now all but assured a top-eight placing.

In my opinion, this was Morel's group. Good size, symmetry, and great conditioning. I was surprised to see Johnnie Jackson in this group instead of William Bonac, who I thought was clearly better. Kuclo was big and tight, but seemed much flatter than in previous years. Roelly Winklaar was tight and had crazy, full muscle bellies, but his stomach protruded terribly and it hurt him in scoring. Fred Smalls and Jon Delarosa looked great conditioning-wise, but unfortunately needed more size to be competitive in this lineup. Delarosa looked very flat in particular.

After one round of posing, Kuclo and Morel were removed from this group, and William Bonac, Ibrahim Fahim, and Jojo Ntiforo were added. I was surprised to see Bonac fall short of my predicted tenth finish. Fahim and Ntiforo are great competitors, but this lineup was too much for them. Still, they came in good condition and did well.

Who will take it? It's too close to call at this point. I think it will honestly come down to the final posedown tomorrow night. Catch all the play-by-play action on bodybuilding.com!