Boise, ID - January 28, 2014 - Bodybuilding.com, the Internet's most-visited fitness website and largest online retailer of nutritional supplements, will offer a free worldwide webcast of the Red Carpet Gala preceding the sixth edition of the Fighter's Only World MMA Awards, presented by Fighter's Only Magazine, Bodybuilding.com, BSN, and The Venetian Las Vegas®.

Keeping with its theme of staying on the cutting edge, the Fighter's Only MMA Awards has added even more entertainment to their star-studded weekend with the live streaming of the preview show. The webcast will be presented by Bodybuilding.com and BSN on Friday, February 7th, 2014, from The Venetian Las Vegas® beginning at 5 p.m. PST (8 p.m. EST).

Hosted by veteran MMA personality Dave Farra, the show will feature a panel of MMA experts from some of the biggest outlets in the world to break down the night's nominees, as well as on-set interviews with host Brian Stann and several of the stars of the MMA world arriving at the black-tie event. As the celebrities and VIPs arrive, correspondent Sherry Landry will update the audience on all the happenings from the red carpet. 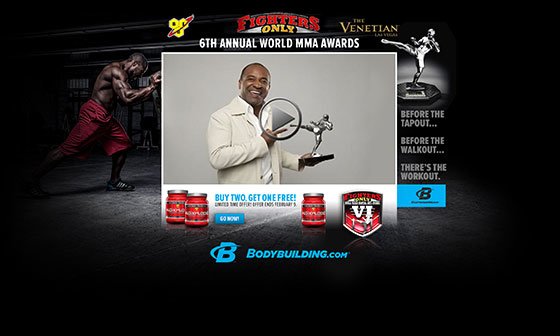 Last year's live ceremony played host to a relative "who's who" of mixed martial arts, all stepping out onto the red carpet under a global media spotlight, and Fighters Only expect this year's Awards to be far bigger and even more glamorous at the new Venetian venue.