The 2008 IFBB PBW Pro Show will be held on Aug 8th & 9th, 2008 at the Tampa Bay Performing Arts Center in Tampa Bay, Florida. Get the latest coverage right here!

I must begin this report with applaud to Tim Gardner for choosing the perfect venue within the Tampa district for "The Pro Bodybuilding Weekly Tampa Pro."

Timing is a great teacher, unfortunately it kills its pupils, but the planning of this show around the dates of the Europa Super Show, and later the Atlantic City, was a flawless move by Tim ensuring that he had a considerable shredded line up vowing for an Olympia birth.

Friendship is like peeing on yourself: everyone can see it, but only you get the warm feeling that it brings. This is how I felt when my fellow Welsh countryman James "Flex" Lewis took to the stage in his pro debut.

What I love about this sport is that the road to success is always under constant construction, and I am excited to see what lies ahead on the Flex's pro lane. I predict it will be much like the narrow paths that meander the Wales countryside, where no one will be able to pass.

They say that 46 muscles are used when a person frowns; if that indeed be the case then Flex's glutes were really pissed off. You could almost hear an auctioneer shout out bids when he spiked his young calves and there seemed to be a winter chill in the air every time he exposed his Christmas tree before flaring out his wind exposed lats.

His supervisor, Neil Hill, obviously had Lewis under lock and key, for he as a former IFBB Pro possessed some of the tightest glutes and hamstrings that walked the British Isles. 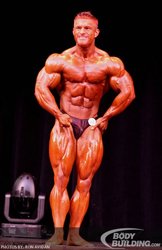 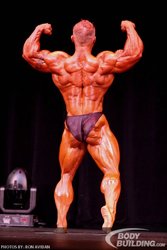 The Giant killer came to the party with a very full sack of gifts. The thighs that were once overshadowed by his massive upper body seemed to have found a little more sweep which provided a nicer flow of streaming muscles that flared up and down from his torso.

The signature thickness and condition was apparent through every back pose but this time his anterior strikes obliged to the appreciation of the crowd. Dense and thick were two of the top meals on the menu and the judges just ate it up 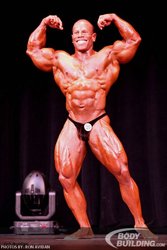 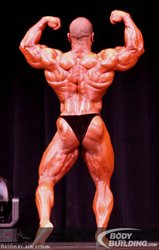 Still no sign of the potential that beat Levrone at the Australian Pro show in 02 and that later emerged on the Olympia stage. His symmetry, particularly through his upper body gleams with polish but his lower body has seen its best days. It would seem that his right quad has experienced an injury which was very noticeable and has punched a dent in his bodywork. 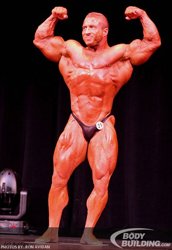 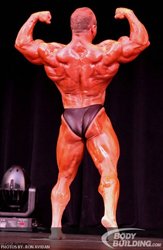 The heaviest in this class weighing in at 202 was the Roc. He mentioned to me prior to the show that he received the experienced helping hand of Dexter Jackson which has obviously assisted at reaching the top shelf of his improvements. What an impressive return of higher level conditioning. His most muscular was reminiscing of "the blade" and the fullness that accompanied was 100%. This was the best showing of Shabazz and I look forward to seeing more 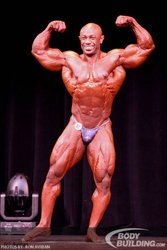 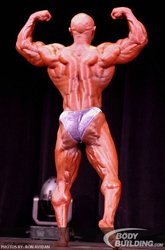 Dry and full. Unfortunately he has played the size game at the expense of his waist but its still early days for the 23 year old. He still has the time to get the midsection into rehab as it's only a slight distraction but with short clavicles to accompany, he can't afford to take the focus away from the array of amazing body parts he has hugging onto his frame. The way he made his pulsating branches feather his lower back before he spread his lats was phenomenal. 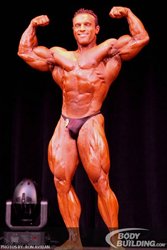 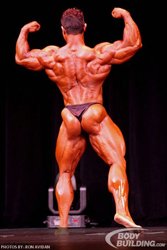 Where Henry attacked with thickness, Flex came back with width and condition. Shabazz seemed to fall between the two which made this a very one to call, it could go either way. If the judges are after condition, Flex walks away from his debut pro show as a winner.

If they want more thickness from a competitor who has more than paid his dues as a top 10 Olympia contender, Henry will continue to gleam his big smile. Following the open class comparisons where Henry was called out above Flex, it would seem that the Giant Killer will take the win. But what do I know; I guess I'm just being judgmental.

Many bodybuilders think they are unique, just like everyone else, but Mark Dugdale happens to be one who doesn't think like that at all which I find as inviting as menthol candy to a morning mouth of garlic and onion vodka mixers.

His collaboration with his trainer Joe McNeil had hoped to unlocked the Dugdale jewels to his newly formed muscle in order to shine against the other previously bigger diamonds in this class of roughs, but it was as if it needed more time to mature, densify and distribute across his frame to take effect.

Noticeable size and signature condition was apparent on Mark from every angle. His arms and thickness had improved but more attention needs to be placed on his breathing in order to control his midsection. I would like to see more width added to Dugdale to make a more impact to a line up of this stature. 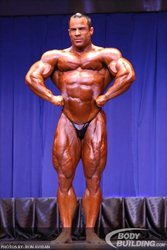 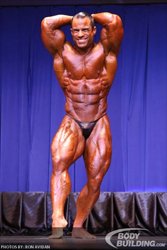 Although Dennis James' last couple of shows has far from been like holiday outing, he still comes in as a favorite cruise on in and sail into the sunset with spoils in hand. Tampa was no the different. With a self claimed resized waistline three inches smaller, Dennis looked like he had lost a little size from everywhere but funnily enough he looked better for it. His lat poses seemed to dim the lighting for the photographers but his thighs and glutes could do with a little more separation. None the less, this is the better side of the Menace from last year. 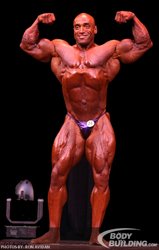 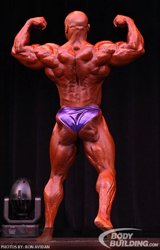 The return of the real, Darrem has gone back to the drawing board of condition to rewrite the books to gain another pro win. Full, tenderized and easy on the eye, his veteran posing really put the rest of the guys to shame. He wasn't at his peak but he was close to it and did enough to please his home crowd and the judges. 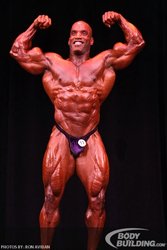 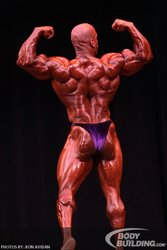 He mentioned at the press conference the day before that he was going to catch old guys slipping, referring to Dennis, Darrem and Freeman. That Fouad certainly did when he was asked to join the first callout with the above names. He more than held is own but he needs only a little more size to take it past the bigger boys. He was more than conditioned overall but there were pockets of softness here and there that were exposed when he stood next to Charles. 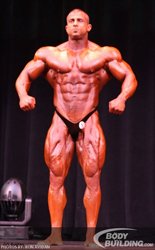 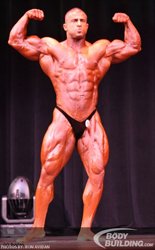 If the judge's focus was condition alone then this guy would take the show. He looked so grainy and dry that you could almost hear his joints creek. 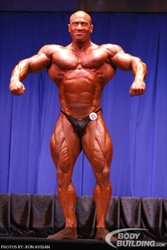 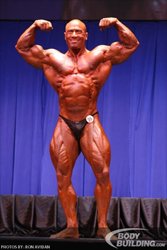 Tarek came in considerably heavier to date which added much more clarity to his physique. In years past his muscle flow was just readable but like having a conversation with a lawyer - a little hard to understand.

Very deep abs and full everything, Tarek seemed to get better as he posed, unfortunately his posing and lack of tan is what held him back, but only slightly. He has a great structure, flowing masses of dry and diced muscle and only more stage time and practice will take him from the back pages of the reports to the front cover. 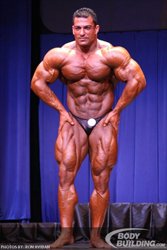 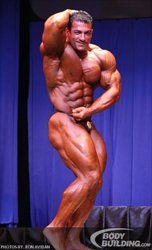 Missing the 202Ib and under class by about 80Ibs was the big "X" frame of the big "T". Refreshed, revamped and rejuvenated from last year's dismal display at the "O" Toney came back with a capital "C". Just a little film of fluid masked is sharpness to full expose the full 3D experience of his towering stature but he seemed to lose most of that humidity as the show progressed. 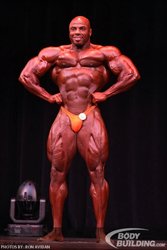