MMA requires serious skill and the sort of guts few men possess. A good fighter must be powerful, agile, mobile, coordinated, and strong enough to manipulate and control opponents. The fighter must be fast enough to move in for takedowns or pull away from dangerous situations.

In a word, he or she must be a beast.

I've trained some of the best MMA fighters in the world, and I have developed two specific strength-and-plyometric routines to develop these very qualities.

Although my workouts are tailor-made for MMA, they can benefit all athletes and fitness enthusiasts. They can help improve your endurance, strength, and explosion. Because they incorporate and activate large muscle groups, the workouts I create also build muscle and burn fat, not to mention a massive number of calories, and net incredible results.

Try to keep up!

In MMA, you go from grappling and pulling to holding with a lot of static contractions. Fighters need to be able to escape tough positions and throw punches freely. The workout below will help with these activities. It will also help fighters build endurance and speed so their hands don't drop or slow during a long fight.

Here are the exercises you'll encounter in the first workout:

The rower is my favorite cardiovascular exercise machine. It uses two of the major muscle groups in the body: legs and back. It's also going to raise your VO2 max, which every athlete needs!

A neutral grip mimics the MMA clinch. The static hold mimics that moment when you're pulling down your opponent and they are giving resistance.

Find something heavy to attach a band to so you don't tip anything over when you step back and pull. Get into a partial squat and pull as fast as you can. If it's too easy, step back and the tension in the band will increase.

Your shoulder girdle has to be strong for you to have power. Pick up a barbell, hold it with a neutral spine, and shrug. Think about saying, "I don't know." Move the barbell up and down under control. Don't lean forward or jerk. Do not look sideways. The higher you can raise your shoulders, the better. 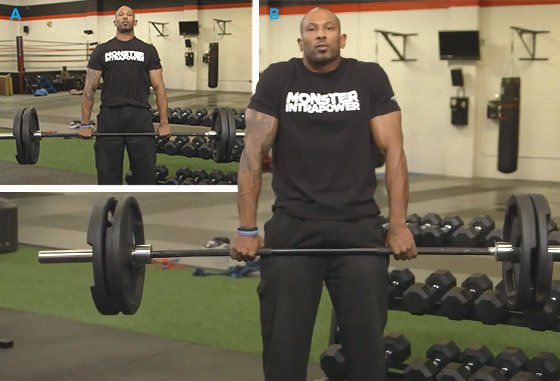 Hold the middle of a dumbbell. Stand up tall with your chin up, chest up, and shoulders retracted. Keep your elbows to your side. Do not swing the weight. Bring your thumbs up to your deltoid. Do not sacrifice form for more weight.

My next routine will help you build hip strength and power. If you have a good wrestling background or if you're powerful in the lower body, you can drive through an opponent and take him down. More than likely you can pull away and win the fight, too. This workout will help you do it.

This workout starts with a superset: front squat to plyo jump. We do these moves together to mix functional moves with plyometric jumps to engage explosive muscle fibers. The combined strength and agility will help in the cage and elsewhere. This workout also contains a number of single-leg movements. In sports, you must change direction, stop on a dime, reverse the movement, and then explode off a single leg. These exercises prepare you!

Rest the dumbbells on the front deltoids, with your legs shoulder-width apart and toes slightly angled out. Keep your stomach tight, chin up, and chest up. Squat low—depth is your friend! I want you to get down nice and deep and stand back up. 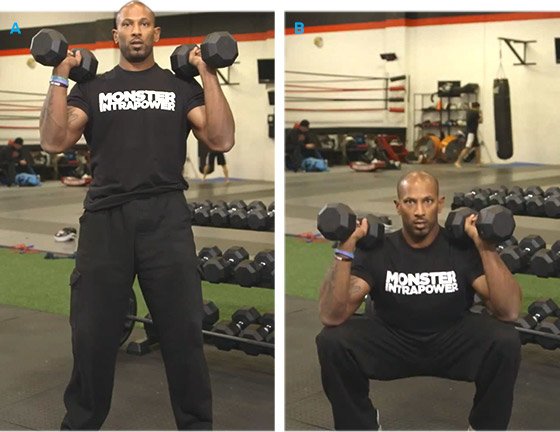 Squat down and jump! Try to catch the floor—it may sound funny, but it helps you activate more muscle fibers. Hit the floor with control. You don't want to slam against a closed joint.

Put your back leg on a bench, hop forward a bit, keep balance, and don't let your knee drift in or out. Sink down into the squat by bringing your back leg down. Don't lock out the front knee at the top. Keep it slightly bent to keep your muscles engaged.

Be extremely explosive off your active leg. When you come down, hold the position for a second, explode upward, and land on the box. Step off and do it again.

Build explosive power! Put the band around your waist, step away from wherever you've fixed the band, and then fall into a lateral lunge onto the leg on which the band is pulling. Fall in, catch yourself, decelerate, and then explode back up through the movement against the tension in the band.

Power step-up: Step-ups help you develop explosiveness and the ability to transition power from one leg to the other. Start with one leg on a plyo box. Your arms come up as your body goes up onto the box. Jump off one leg, switch legs in the air, decelerate and land on the other leg.

Get a glimpse into how UFC star Ryan Bader trains and eats. It's about as intense as intense gets. The video warm-up will get you ready for any fight!

Whether you're headed to the octagon or just want to look like you are, fight training will move your athleticism and physique up a class!