Super Seed: The Case For Chia!

The chia seed isn't much to look at, but it packs an incredible amount of nutrition into a tiny package. Here's why it deserves a place in your shake.

OK, so the Mayans struck out about the end of the world. Don't look too surprised—or disappointed, for that matter. If we're going to judge civilizations by how often their religious predictions match up to actual events, then we're all about as doomed as, well, the Mayans.

The Mayans struck it rich, however, with chia seed. If the end of the world isn't their enduring legacy, this super seed might be. Depending on whom you ask, the name of this trendy but visually puzzling (is it food? a supplement? bug poop?) aliment comes from either the Mayan word chiabaan, for "strengthening," or the Aztec word chian, for "oily."

In either case, chia was a staple crop among both ancient civilizations. The Aztecs reportedly prized it even more highly than the Mayans, using chia as medicine, offering it to the gods during rituals, and demanding it as annual tribute from conquered tribes. One refrain you'll see repeated often by chia advocates is that the Aztecs considered it "more valuable than gold."

Does chia have anything to offer you, the health-conscious eater or athlete? Should you let it elbow its way next to flax, hemp, and the rest of the crowded roster of superfoods that TV hosts scream at you to eat? Is it just another Mesoamerican end-of-the-world trend that we won't be talking about three years from now?

Don't count on it. After centuries of obscurity—excepting its starring role in late-night Chia Pet commercials—chia has been the subject of a handful of promising recent nutritional studies. The consensus is that this seed stands as one of the most nutrient-dense foods in existence, on both the macro and micro level. It's time you get to know chia.

Like most so-called superfoods, chia has been the victim of over-marketing and over-promising. Don't put too much stock in the "more omega-3s than salmon," "30 percent more antioxidants than blueberries," or "more potassium than a banana" shtick that populates Websites and seed bags, because it's usually based on unrealistic serving sizes and selective definitions.

That being said, chia's nutritional profile is undeniably broad and impressive. A standard 2 tbsp (24 g) serving of chia seeds contains:

It contains all eight essential amino acids and a host of trace minerals and micronutrients. To put it in easy comparative terms, each 2 tbsp serving of chia offers: 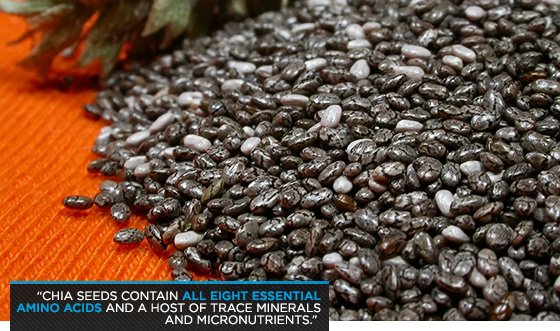 Chia is also a potent antioxidant source on par with blueberries and other blue-red fruits. It has impressive levels of quercetin, kaempferol, chlorogenic acid, and caffeic acid, four powerful antioxidants that provide a slew of health benefits. An additional benefit of this high level of antioxidants is that chia seeds can last years without spoiling, despite lacking the hard—and indigestible—outer shell of other edible seeds like flax.

One other nice thing about chia seeds: They're almost always organic, and naturally so. The high oil content of its leaves acts as a highly effective insect repellant, making harsh chemical insecticides unnecessary and organic seeds easy to find. Chia can also be harvested easily by hand and meets most definitions of "sustainable."

It may come as a shock that chia so dominates walnuts, the supposed king of non-animal-product essential fatty acids. In fact, chia has the highest level of omega-3s of any known plant product, with oil making up between 25-40 percent of the mass of a seed. Let's put this in context.

A common knock against chia is that its essential fatty acid content is largely comprised of the short-chain fat alpha-Linoleic acid (ALA), which the human body inefficiently converts to more biologically active long-chain fats (This is a critique that could be levied against all plant-based omega-3 sources, by the way). Long-chain omega-3s such as docosahexaenoic acid (DHA) and eicosapentaenoic acid (EPA) are the type derived from oily fish and fish-based supplements, and from whence most of the well-publicized health benefits of omega-3s are derived.

However, a recent study conducted at Appalachian State University punched a hole in this criticism, when researchers found that after seven weeks of taking 25 grams of milled chia daily, female test subjects showed significantly higher levels of plasma EPA, not just ALA. This result echoed previous studies done with hens, rats, and rabbits. The subjects' DHA levels were unchanged, leaving this crucial fatty acid in the domain of the fish, but a promising new avenue of research for chia was opened.

Many modern athletes were introduced to chia by author Christopher McDougall, in his best-seller Born to Run: A Hidden Tribe, Superathletes, and the Greatest Race the World Has Never Seen. While hiking up a steep canyon trail with members of the Tarahumara Indian tribe, McDougall is given a cup of chia mixed with water and lime, the Tarahumara's long-favored running fuel.

On first glance, McDougall describes the concoction as "gooey slime that looked like rice pudding without the rice, lots of black-flecked bubbles I was pretty sure were frog eggs in mid-hatch." A little more research, though, led him to concoct a more favorable comparison: "In terms of nutritional content, a tablespoon of chia is like a smoothie made from salmon, spinach, and human growth hormone."

A handful of studies in recent years broadened the appeal the tiny seed has for athletes. Among the most promising was a 2011 study published in the Journal of Strength and Conditioning Research, which found that a 50-50 caloric mix of Gatorade and chia offered the same performance benefits as pure Gatorade. Of course, the chia blend had lower sugar, ample omega-3 and fiber content, and a far healthier nutritional profile.

Chia is also packed with trace minerals and phytonutrients that possess established athletic benefits, and a few with benefits that are just starting to be understood. They are rich in phosphorous, manganese, calcium, and potassium, all of which support healthy muscle function. One of the handful of antioxidants common in chia seeds, quercetin, is a flavonoid with known anti-inflammatory and antiviral properties. According to a 2010 study published in the International Journal of Nutrition and Exercise Metabolism, quercetin also "has important implications for enhancement of athletic and military performance," after it was shown to increase both VO2 max and endurance capacity in human subjects.

The "gooey slime" portion of the chia seed contains one of its best-known athletic benefits. The seed's outer husk is hydrophilic, meaning it draws in fluid. When mixed in water, chia seeds can absorb 10 times their weight in fluid, making them an excellent addition to an intra-workout mix, or a great way to pre-hydrate and prolong hydration during intense training. This is the logic that drives a growing number of pro athletes to mix chia seeds into their nutritional shakes.

Yes, But What Do I Do With It?

The majority of chia recipes populating the Internet can be summed up like this: Take one otherwise normal smoothie/pancake/cookie/salad dressing/muffin/yogurt parfait recipe. Toss in a scoop or two of chia seeds, which supposedly make it healthier somehow.

If this is the modern equivalent of enriched flour, we could do a lot worse. Vegan bakers have been known to use chia gel mixtures as an egg substitute and binding agent in baking; its hydrophilic surface makes it an excellent thickener. A study published in 2010 in the Journal of American Dietetic Association found that chia gel (chia mixed with water) could replace as much as 25 percent of oil or eggs in cake recipes without significantly affecting the color, taste, or texture, while also "yielding a more nutritious product." They're less labor-intensive and easier to digest than flax, less intrusive flavor-wise than hemp, and neither of those seeds could so easily stand in for eggs in a pinch.

However, chia's appeal is so integrally tied to nutrition that it's understandable to want to take it more directly and predictably than via cookies. For this reason, I advocate embracing chia for the food-based vitamin it is, and drinking it down. Its incredible fiber content alone makes it worth consuming daily—there's no fiber supplement anywhere that beats its overall nutritional profile.

To start, just dump a scoop in whatever you drink during the day. You'll get used to the texture.

Here's the most basic recipe:

Directions: Mix it all up, making sure to shake the chia a couple of times over the next 10 minutes. A shaker bottle makes this far easier, because the seeds are extremely prone to clumping.

The ratio of chia to fluid is definitely a matter of taste. For instance, I find the commercial chia drinks by Mamma Chia and GT's Kombucha to be overly sweet and slimy, but they're delicious (not to mention longer-lasting) when watered down by about a third.

For fluid options, try some watered-down juice, branched-chain amino acids, or whatever else you're going to drink anyway over the course of the day. My daily chia fresca at 11 a.m. makes for an easy bridge between breakfast and lunch, keeping me from feeling hungry or mentally cloudy until the morning tasks are out of the way. It doesn't provide a boost like caffeine, but I've never found a food or drink that equally helps me to maintain a consistent level of energy and productivity over the course of an entire day. 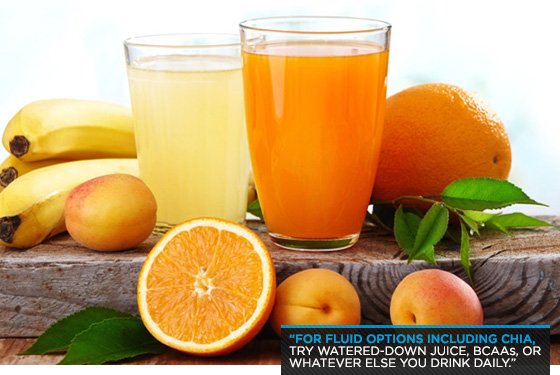 You can put chia in otherwise unflavored water, but honestly, I don't recommend it. Chia is relatively tasteless, but every once in a while you'll encounter a seed that tastes bitter and rancid, even among the top brands. This will likely improve as the industry evolves, but for now, a bit of flavor goes a long way.