Some exercises and strategies that target the lateral head of the triceps are better than others for growing the biggest of the three triceps heads.

So you're shirtless and a bevy of lovely ladies can't stop checking out your physique. Happens every day, right? You begin tensing your muscles, every one of them, as you gently exhale while trying to look as natural as possible.

Wait—did you flex those triceps? You know, the muscles that make up two-thirds of your upper arms? Or do they not measure up to the rest of your physique? 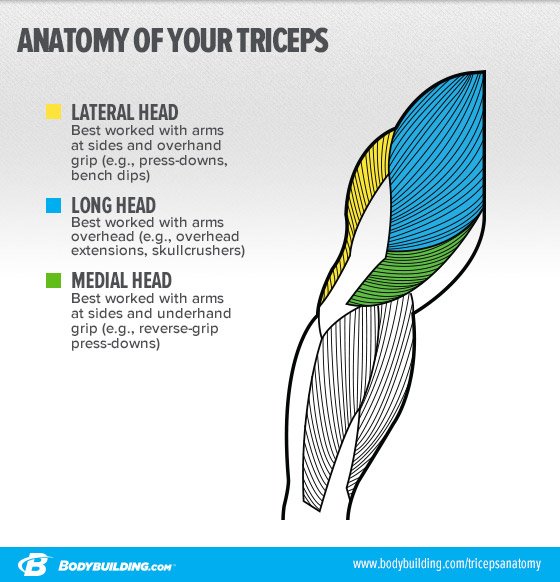 When seen from the front and sufficiently developed, the lateral head of the triceps provides curvature of the upper arm that attests that you've got a jacked physique.

The goal here is to make the lateral head as big as humanly possible. I'll show you the tricep exercises that target it most directly and the strategies that will bring it up—whether it's a weak area or one that you just want to make even stronger.

It's impossible to isolate the lateral head completely. But that doesn't mean we can't find ways to emphasize it over the long and medial heads. It's not unlike how you emphasize lower versus upper abs, upper versus lower pecs, or vastus medialis versus vastus lateralis when training quads.

Let's take a look at six strategies you can include in your workout to emphasize the lateral head.

1. Prioritize Triceps In Your Training

That sounds like a "duh" statement, but there are a number of actual steps you can take in the short term to emphasize not just your triceps, but the lateral head in particular.

For one, train your triceps after a rest day. This is an easy strategy that essentially requires you to rearrange your training split. Of course, your rest day should include plenty of sleep and sound nutrition so your body is primed for a challenging workout. Certainly, there's nothing tougher than trying to get a good workout in when you're tired and you'd rather be anywhere but in the gym.

A rest day also helps refresh your mind. Motivation tends to wane when you've spent too many consecutive days in the gym. Strategically placing a rest day before you train a weak body part—in this case your triceps—can set your mind and body up for taking your training to a whole 'nother level.

You can also prioritize particular lateral-head movements in your triceps workout. When using an arms-overhead position during triceps training, your long head takes the brunt of the load. When using a reverse (or underhand) grip, the medial head gets slammed. But we're after the lateral head here. So when doing movements in which your arms are by your sides with an overhand grip, that head becomes the focus of the movement.

That means dips, kickbacks, and overhand-grip press-downs are all good choices for targeting the lateral head. Of course, some exercises like skullcrushers position your arms at an in-between position, perpendicular to your body, so they focus on both the long and lateral heads.

2. Start Your Triceps Routine With A Multijoint Movement

If multijoint exercises are your best bet on chest or leg day, why should it be any different on arm day? The answer is it isn't. Multijoint exercises (also called compound movements) are best done when your energy levels are high early in your workout before fatigue starts to set in. Then you add single-joint movements.

As a refresher, multijoint movements are those in which at least two sets of joints are working. Compare a close-grip bench press (movement taking place at the shoulder and elbow joints) with a press-down (movement takes place at only the elbow joint).

With the former, you can use far heavier loads, as other assistance muscles can help out. With the greater loads comes greater muscle stimulus, which is what you're looking for with the first one or two exercises in your routine.

There isn't a long list of multijoint triceps exercises, but most dips (parallel-bar dips, weighted bench dips, seated dip machine) can all be done with a substantial amount of weight. Close-grip benches, as mentioned, are another excellent multijoint movement that can be done first in your workout.

What's more, don't be shy about choosing heavy weights with your multijoint triceps exercises. Use a weight in which you fail at about 8 reps. Keep the higher-rep sets for the tail end of your workout, when you're aiming for a final pump. If you can do more than about 8 reps, add weight. If you're doing bodyweight dips, add a weight belt.

3. Include A Second Lateral Head Movement In Your

Most workouts are assembled so that you include a number of angles that hit all the major parts of a muscle. But if you're looking to focus on a particular area—in this case, the lateral head of the triceps—by all means include a second or even third exercise to focus on it. Just don't repeat a movement that's similar to the first one you did. So if you started off with weighted bench dips, then weighted parallel-bar dips or the triceps dip machine is too similar, especially if you train within the same rep range. 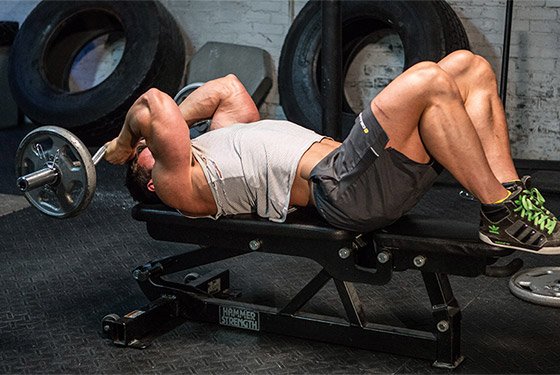 Instead, overhand-grip press-downs and kickbacks are excellent single-joint choices. You can also choose a movement that focuses on two heads, such as lying French presses, aka skullcrushers. Whether done with a barbell, EZ-bar, dumbbells, or cable, they target the long and lateral heads. There are even some machines that mimic this movement.

In my second strategy I suggested you choose a weight that really challenges you with the first lateral-head exercise. With the second movement, choose a weight where you reach muscle failure at 10-12 reps, not 8. The different intensities ensure the muscle gets trained in more than one single way.

If your goal is to build maximum muscle, then taking your sets to muscle failure is key. Exercise scientists will tell you that taking some (but not all) sets past muscle failure is also linked with increased protein synthesis. If you're just putting the weight down when it starts to get uncomfortable, you've still got a ways to go.

Training past failure is best done on the 1-2 heaviest sets of an exercise. There are a number of advanced intensity-boosting techniques at your disposal, some of which require a training partner. Let's take a look at a few good ones you can do on your own, as well as some that are good choice when you have a spotter.

5. Add a second triceps day to your split

When you train each body part once over the five-day period, you can easily add a second triceps workout so that you're doing it twice over that same number of days. You wouldn't want to follow this strategy for more than 6-8 weeks, but in the short term the greater frequency allows you to hit the target area more often for better overall stimulation.

If you follow this, don't simply repeat the same workout you did the first time. Consider the first workout to be a routine that hits all three heads and the second to be lateral-head focused. 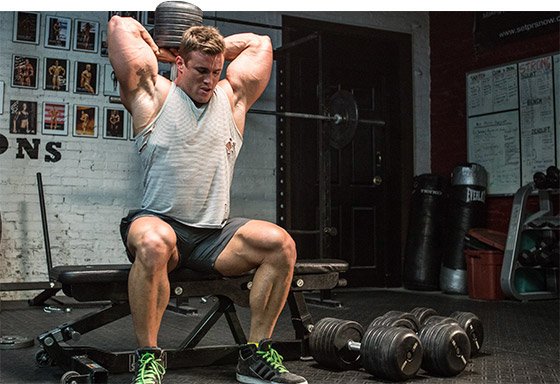 How you construct your split becomes critical because you're at greater risk for overtraining your push muscles. Here's what not to do: back and triceps on day one, chest and biceps on day two, shoulders on day three, and legs and triceps on day four. Here, the triceps is worked on every single training day, shortchanging its potential for recovery.

Consider instead tagging one triceps workout after chest, and the other on its own day (with biceps), so that it's fresh and can be done with maximal weight. Here a training split might look like this: chest and triceps on day one, back on day two, shoulders on day three, legs on day four, and triceps and biceps on day five. Make sure you allow at least 48 hours before hitting the triceps again, to allow for recovery.

If you decide to train tris after chest, try this lateral-head workout that's sure to ignite a pump and burn like nothing you've experienced before.

Your workout becomes stale when you do the same movements over and over again. Rather than sending you back to the gym with the same old movements, let's take a look at a few you may not be doing that can work your triceps in slightly different ways than they're used to.

As mentioned earlier, we're especially looking for movements with arms by your sides. Let's start with multijoint moves, since we stated you'll get more bang for your buck with them. You may already be doing machine dips or weighted bench dips in your workout, but make sure you're including both in your routine. 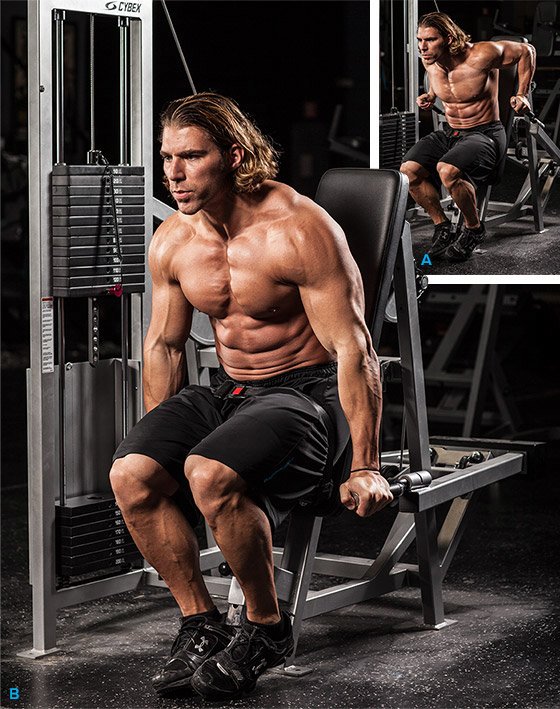 Close-grip bench presses are another triceps builder, but you can shift more of the emphasis to the lateral head (and off the long head) if you lie on a decline bench rather than a flat one. Doing the movement on the Smith machine is another good variation.

Another good multijoint move is the close-grip push-up. It may be fairly easy for you, but if you elevate your feet, you'll increase the degree of difficulty.

Skullcrushers are a good single-joint exercise. Here, too, you can lie on a decline bench to put just a bit more stress on the lateral head. If you like doing kickbacks, try a cable instead of dumbbells—just remember to keep your elbows up to better isolate the triceps. There's nothing too special about overhand-grip press-downs, which is why you should look for ways to use intensity boosters here to really put some zing into the movement.

With these exercises, you're looking for ways to introduce slight modifications to your lateral-head triceps exercise arsenal. Combine these with the other tips and you're on your way to improving the one triceps head that looks great from the front.