Action stars aren't assembly line creations. They're crafted from the ground up by devoted trainers like Simon Waterson.

You don't fill out a tuxedo as broad as 007's just by sipping gin and bedding Bond girls. Like everything that happens at MI6, there's an expert behind the scenes pulling the strings. Meet Simon Waterson.

In a former life, Waterson was a British Royal Marine who augmented his meager rations with mail-order bodybuilding supplements. But for the last 13 years, he's used military techniques to help a handful of stars who needed to beef up for big roles, such as Chris Evans for Captain America, Jake Gyllenhaal in Prince of Persia, Halle Berry in Die Another Day, and the last two 007s, Pierce Brosnan and Daniel Craig.

On the opening day of the new Bond film Skyfall, Waterson spoke with Bodybuilding.com about his unique training methodology and his go-to supplement stack. Unless you like it clumpy, be sure to serve it shaken, not stirred. 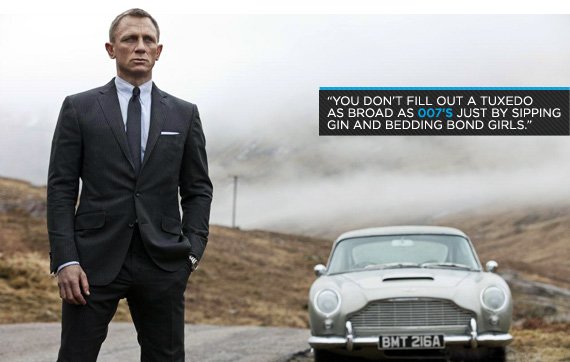 Q
I know you like to work out alongside actors and actresses as you train them. What does that add to the mix?

It always just made sense to me, because I like to work by feeling. So if I'm feeling a certain way, whether it is fatigued, over-trained, under-trained, not enough intensity, or whatever, then the other person is feeling it. I use myself as a barometer, and then I can adjust things if calories are too low, or if we aren't taking in enough supplementation of certain things and I'm feeling ill or tired all the time.

It is tough having to do these things, especially with actors who are being asked to be athletes. Professional athletes get to have 12 hours sleep, they get to nap, they get the right food. They've got that structure, as well as not having to go to actual work and do like a 14-hour day and then train, like an actor has to.

So you think being an actor is actually more difficult than being a professional athlete?

I would probably say in some cases it is probably just as tough, because the workouts and the performance are similar.

And just like for [athletes], nothing I do is ever structured for aesthetics. It's not something I concentrate on. Aesthetics is just a by-product of being an athlete. Usain Bolt does not stand on the beginning of the 100-meter dash line and say, "Check me out! Look how great I look!" It's not about that. It's about his performance, and he just happens to have the functional physique to allow him to get from A to B in the shortest time possible. Whether I am working with an athlete or an actor, they are both structured similarly. 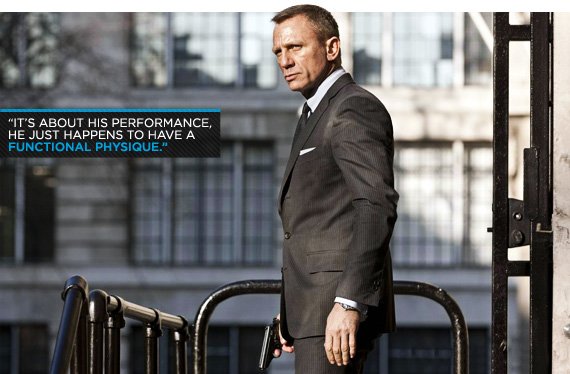 The actors you work with surely have experience with training coming in. What advantage do you provide over what they could be doing themselves, or with some other trainer?

It's just a question of knowing what works. I don't divulge everything, but it is basically creating efficiency. With my military background comes experience handling big productions, knowing how to get from A to B in the most efficient way possible while preventing injuries. Everything I do is to try to prevent what could happen.

In films there is a pre-production, in-production, and post-production, like a football or soccer player would have. They have a pre-season, in-season, post-season, and then rest. If you're training a football player, you want him on the field at all times with as much energy as possible, un-injured and performing to the best of his ability. That's how I approach each job.

I know you're a believer in supplementation while training. Are the stars you work with resistant to it, or is it something that they generally come around on?

So it is a really hard subject to broach with a lot of people, but from my perspective, supplementation is a total support for when your body is working at such a high rate. You need to put in certain blocks or boost your immunity. You need to feed certain muscle groups, or you need to store energy, just to maintain that efficiency and repair quickly. That's how I broach the subject of supplements: it is just a support to intensity.

I saw the stack you used to help Chris Evans prepare for Captain America: 180 g of protein powder per day, including casein before bed; BCAAs, glutamine, and fish oil. Is that still your go-to lineup, or are you trying anything new? 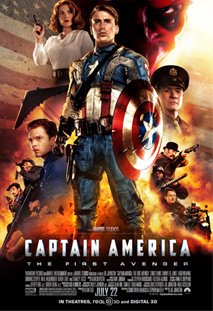 It's kind of standard. I really just try to block the whole body from going catabolic. I try to put in as many stop points as possible.

BCAAs are going to help keep you from going catabolic, in my opinion. With fish oil, I am a firm believer that putting good fats into the body allows the body to release the bad fats stored around the heart. When the body knows it is going to get a certain amount of fat, it feels comfortable releasing it. Glutamine, again, is for immunity. If you are over 35, it's good to have a little test booster in the morning. I like to use a little melatonin to help get a good night's sleep and get into REM as quickly as possible.

I use supplements differently through different periods—pre, during, and post—like any athlete does. You hear all these myths, and I think as long as you've got the right blend, and the body is creating chemical reactions to what you are asking it to do, then it is going to work. The science of supplementation is just becoming more and more apparent. Of course, as with anything, you can say that some things work for some people and some things don't work for other people.

Is nutrition also ever changing for you, or do you have a fixed take on that?

Nutrition is really tough. The problem I have is moving between countries, working in America and the U.K. We have different foods that have different contents, and the food standards agencies are different. You can have certain things in your foods that we can't have in our foods.

So working between countries, I like to give people general rules rather than meal plans. No starchy carb after 2 p.m.—that's the simplest rule. Whether you are in England, Brazil, or wherever, no bread, white potato, white rice past a certain time.

How did you make that transition from military man to a celebrity trainer?

Yeah, it seems like a different life, but the military and being a trainer are all about structure. Everyone has a certain job to do at a certain time. Without structure you have nothing.

The military has helped me a lot to be able to have that structure, as well as to do periodization. It's like, "We have to be in this kind of shape and performing this at this point, and this is how we are going to get there." The success or the results I've got are because of that consistency and continuity, and being meticulous with things I want to achieve. The military definitely teaches you that from a young age. 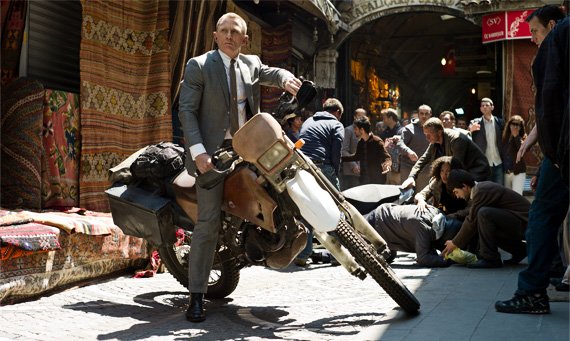 It probably also teaches you that everybody comes in and gets the same treatment.

Yeah, exactly. That's the thing. You can't be intimidated. You have to say how it is, and if you want the results, then this is how it has to be.

You worked with the last two James Bonds, Pierce Brosnan and Daniel Craig—two different body types, with different aesthetics. With the switch to Daniel Craig, the muscles are much more on display. Is that something he was bringing to the table, or were you told, "This is the guy we imagine, and we need you to help make Craig look like him?"

With Daniel, we were training hard, being conscious about food, but in a balanced way. It wasn't scrutinized, and you've got to remember that there are certain amounts of genetics that come into play. You have to be blessed in a certain way. 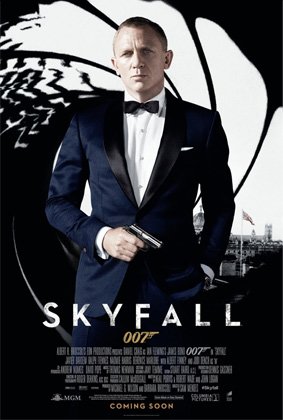 Has your training program with him really changed over the course of three movies, or is it just maintenance at this point?

I wouldn't say it has changed. The theory and philosophy is similar, but it's evolved as our efficiency evolves. You know how to train better; you know how to eat better. As you become more efficient, as you know yourself more, you become fitter. You become healthier.

I think we are all guilty when we start training of overdoing it. It is that old adage that if you want muscle enhancement, fatigue is good. Bodybuilding is the only thing in the world where failure is a positive. But failure and fatigue really are amazing. Feed your muscles, let them grow, and that is basically it.

What is the most common difficulty or hurdle that movie stars have to overcome when they go through training like this? Is it that they want to work too hard, or is it something else?

I think is the hardest thing is getting rest. I feel that my talent in this business is helpful when we are doing a full day's work and then have to go and do a lot in the gym.

But to be honest, rest while filming is not too bad. With these action movies, a lot of things are done far in advance. Whether it is sprinting, jumping, all the things that are involved with action movies, you are so conditioned for it that when you are actually doing it, you have done it so many times that's it's almost like second nature.

What are some of the movements that you rely on when you are training someone for an action film?

Right now it is almost like a variation of CrossFit. It is functional, dynamic, and not aesthetic. It is all about using as much natural body movement as possible.

I also use a lot of plyometrics into strength exercises, like squat thrusts into pull-ups. I use something like a metabolic deadlift—a deadlift into a squat thrust, into a press-up, back into a deadlift. Then you can adapt that. I always put a blend of exercises together and use two back-to-back, like a deadlift into a plyometric, or pull-up into a plyometric. If I want to fatigue the chest, we would do incline press into kneeling cable flyes. There's little rest between any sets.

It's all about adapting exercises to be more efficient, so the body moves through all its natural functions and you are not inhibiting it. You're not, like, sitting on a machine doing a seated press, which would have no relevance whatsoever to a person that has to be able to sprint, jump over a bridge, and jump onto something. I try to keep away from kinds of exercises that are isolating. 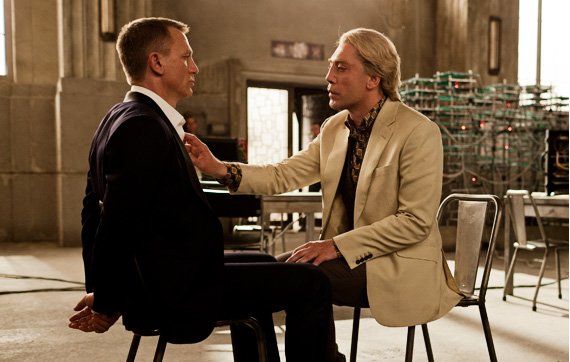 As you get older and gain more experience, it must be hard to surprise you with anything.

It is, but the nice thing about doing different movies is that people have different physiques and perform different ways, so I'm constantly changing their programs, and that means changing my program. Sometimes I have to train myself and do the programs actually in pre-pre-production. There is nothing that I have ever given to someone that I haven't done on myself first.

I would never not do that, because that is the only way to know if it works. There is no time to ask, "Is this going to work? Is it not going to work?" I will always test supplement stacks, nutrition, cutting or adding calories, or types of proteins or carbs, on myself. As a trainer, I'm only as good as my knowledge.