Phil Heath, Jay Cutler, Kai Greene, and many more of today's best bodybuilders prepare for the Olympia in this new film!

In 1977, a gritty documentary introduced bodybuilding to the world. Pumping Iron enlightened and inspired millions of aspiring bodybuilders and casual fans. On September 20, 2013, Generation Iron, a new movie featuring modern giants, will hit theaters and reintroduce the sport. 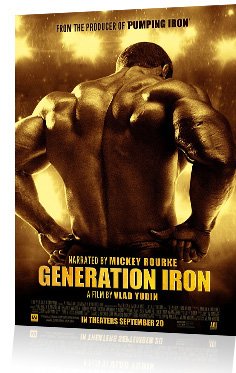 Before Arnold Schwarzenegger became The Terminator and Lou Ferrigno became The Incredible Hulk, the docudrama Pumping Iron displayed the preparation of these two legends and many others throughout their great battle for the 1975 Mr. Olympia crown. The film became a phenomenon that is watched, rewound, and watched again by fans generations after its debut.

Up until now, Pumping Iron was the only major film that focused on the bodybuilding industry. So much has changed since the 70s. The industry is now a billion-dollar-plus machine that includes hundreds of supplement companies and publications vying to be known as number one. And, oh yeah, the website Bodybuilding.com has made its mark too.

Arnold, Lou, and Franco Columbu are retired, and the sport now rests on the massive shoulders of Phil Heath, Jay Cutler, Kai Greene, and other emerging greats.

To showcase this new era, Vlad Yudin and his company, the Vladar Company, connected with American Media [owner of the former Weider health-and-fitness magazines] to make a new film. Bodybuilding.com sat with Vlad to talk about how this idea came to fruition.

Q
So what made you decide that you needed to develop and create Generation Iron?

Well I know about fitness in general and live a healthy lifestyle. I was involved with the 25th Anniversary re-release of Pumping Iron. Although it is a great film and has made its mark on the world, I felt the time had come to do something new and updated. Everything the sport was about in the 1970s is different than what bodybuilding fans know about today.

After speaking with several people, we decided that the time is now and we started on Generation Iron. I know fans worldwide have been waiting on something like this and it is finally happening.

What is the movie about?

It covers seven of the best bodybuilders in the world as they prepare to compete in the 2012 Mr. Olympia contest. Much like Pumping Iron, it covers the training and contest, but as you will see, Generation Iron does go a lot deeper into the lives and preparation of these guys.

Many fans have seen Pumping Iron and may think that Generation Iron is going to be the same thing. What are the biggest differences between the two?

Back in the 70s, many people didn't know what bodybuilding even was. Pumping Iron was a nice introduction, but it showed a small part of the entire puzzle. Today bodybuilding is much better known. The awareness is there. Generation Iron is going to be much more in-depth.

It is going to be about more than the gym and the contest, which I think fans will appreciate. And it will educate people who may not be as familiar with the sport. There is a lot that people don't understand or have misunderstood that they will know more about once they see it.

What challenges did you face as you produced Generation Iron?

There was more travel than we thought, and you have to look at the situation from their perspective. These guys show up at expos and contests knowing people will see them and they will have to face cameras and media. 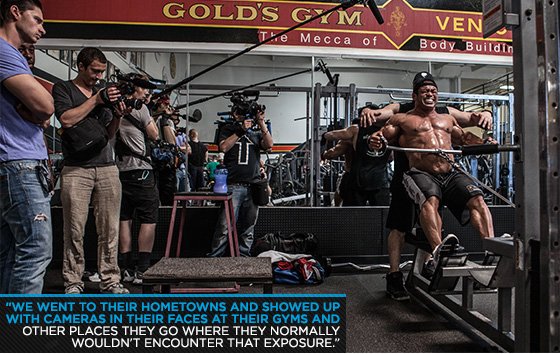 We went to their hometowns and showed up with cameras in their faces at their gyms and other places they go where they normally wouldn't encounter that exposure. There were obstacles and challenges. It was worth it at the end of the day.

Obviously many people who see the movie are looking forward to the hardcore training. The guys we look at as the best in the world do things many people couldn't imagine doing themselves—much like Pumping Iron. Is there anything that will be in the film that they may not expect to see or learn?

Absolutely. You will see that, just like us, they are real people. They go through emotional rollercoasters and deal with serious events in their lives, like we do. They have to deal with adversity and, as you will see in the film, you will be able to identify with them because this is about more than the training and the competition. It shows their everyday lives. And bodybuilding is only a part of their normal lives.

Were you only able to cover part of their lives? Was there anywhere that you were told you couldn't film or were they "open books" in a sense?

Oh they were definitely open books. Anywhere they went, I went. We didn't even spend the majority of the time in the gyms. We went from New York to California and points in between. I'll say it again. This is going to be more than a workout film. You will see a lot that you didn't expect. 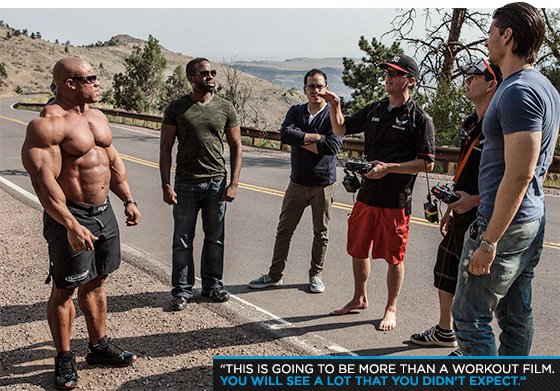 Now that you have done all this work and filmed these athletes in their environments, do you have a different perspective about bodybuilding than you did before you started this process?

Of course. I was familiar with bodybuilding anyway, but there is a lot I didn't understand about it. I learned a lot about the different perspectives of training, dieting, and their beliefs about life that I didn't know. I definitely have new appreciation for what these guys do. Anyone who watches Generation Iron will feel the same way I'm sure.

Although many of the people who know about our industry will be waiting in line at the theaters to see it for themselves, there are others who will debate whether they should. Why should they?

I feel they should because it is going to give a whole new perspective they won't expect. When Pumping Iron first came out, no one knew or understood bodybuilding. Although the sport has grown, there are still a lot of people who don't understand it or the industry. Generation Iron is going to increase the knowledge and the awareness. It will open a new scope. It will show completely new things that people who follow bodybuilding may not even know about.

It will also show that, like regular sports where fans have their favorite stars, bodybuilding has the same. There are fans who are loyal to their favorite guys. I feel that Generation Iron will not only satisfy bodybuilding's current fan base, but it will actually create new fans as well.