Blast Off To A New Level Of Mass With Light Training!

If you want extreme muscle mass, you need to look at lighter, slower-rep training. Cash in on real muscle growth with this detailed list explaining how to do this type of training, why, and sample exercises to go with it!

New Research:
Light Training For Huge Gaining
Here's How To Apply The Findings To Your Workouts For A Blast Of New Mass

We all know you have to lift heavy weights using low reps to build muscle, right? Power bodybuilding. Grind out the reps. Doubles, triples and max singles. Not so fast, iron slingers.

Here are the startling results of a recent study that looked at lighter, slower-rep training compared to heavy, normal-speed sets that may change the way you train forever—if you want extreme muscle mass, that is. (We'll show you how to use this info to grow after a look at the study.) 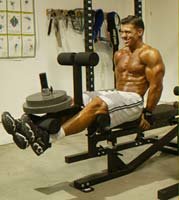 The workouts were performed three times a week for 12 weeks.

How on earth did the slow-rep light training in group 1 build so much muscle comparable to standard heavy training? After all, 50 percent of 1RM is less than most trainees warm up with!

Answer: sustained muscle activation, or longer tension time. Notice that each of the light reps lasted for about seven seconds. That's 56 seconds of continuous tension on the quads (7 seconds x 8 reps). That produces a high level of blood-flow occlusion due to muscle oxygen deficit, which produces muscle growth—on a few different pathways than standard heavy training...

The authors suggest that the increased gains in size and strength are due to a localized increase in hormonal signaling factors, which promote the release of growth hormone and localized insulin-like growth factor 1. That type of continuous-tension, light training also produces nitric oxide, which promotes the proliferation of muscle satellite cells. That's a lot of contributing factors to anabolic acceleration.

So restricting blood flow to the muscle releases more NO, which dilates blood vessels in an attempt to overcome the decreased blood flow within the muscle, which activates GH release. (In fact, we would contend that most of the muscular upper-body development of male gymnasts is the result of occlusive-activation on the rings and floor exercises, as they don't do any heavy progressive-resistance work. Interesting!)

Yes, heavy sets at normal speed produce the most force—and that activates the fastest-growing fast-twitch fibers toward the end of the set.

In 3D Positions-of-Flexion training, you do your big midrange exercises, like squats and bench presses, with heavy weights for around eight reps at normal speed. That stimulates force-activated fiber hypertrophy. You finish each body part with an isolated contracted-position exercise, like leg extensions and cable crossovers.

That's where you get the occlusion effects—you use lighter-weight and slower reps on these continuous-tension isolation exercises so each set lasts 50 to 60 seconds. That gives you occlusive-activated hypertrophy, which includes a bit more fast-twitch fiber growth, but also endurance-component growth, like mitochondria and capillary development—plus a rise in growth hormone. That's a whole new level of growth you're missing if you just go heavy all the time.

In other words, if you only do one of the two styles—heavy, normal-speed training or lighter, slower-speed occlusive sets—you can miss key anabolic stimulation and you won't grow as fast as you could. That's why it's important to use both styles of training, as in Positions-of-Flexion workouts, if you're after extreme muscle growth. [For a complete explanation of Positions of Flexion, see the Bodybuilding.com article, Get a Muscle Mass Fix With Scientific Muscle Morphing]

Yes. You do get some occlusion effects on other exercises—even big compound moves like squats—if you keep the weight moving; that is, no rest at the top or bottom and no lockout. But the real occlusion occurs on the last contracted-position exercise, leg extensions, when you use the slower cadence—five seconds per rep, for about 12 reps.

Here's a list of other continuous-tension contracted-position exercises you should end your body parts with—and use the same slow cadence so you're repping for about 50 seconds (it's the time, not the number of reps, that matters). 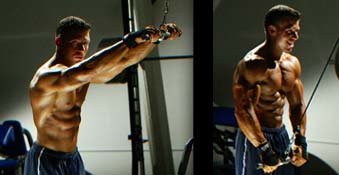 How many sets? That's up to you. In POF programs you get some occlusion effects from the first exercise, the big midrange move, and the second exercise, the stretch-position move. We like one or two sets on the final contracted-position exercise to finish off the target muscle with a skin-stretching pump.

Speaking of stretch-position exercises, like incline curls and overhead triceps extensions, you also get special mass-building properties from those via stretch overload. That's why a stretch move is included in every 3D POF body part routine—midrange, stretch and contracted.

Those hypertrophic effects were demonstrated in an animal study that produced a 300 percent mass increase after only one month of progressive stretch overload. [Antonio, J., and Gonyea, W.J. Med Sci Sports Exerc. 25:1333-45. (1993)] Yes, a triple-size muscle increase! But that's a whole other anabolic ball of wax.

For now try finishing every body part with the contracted-position exercises, as listed and described above—higher reps, longer tension time, maximum muscle occlusion and fiber-searing burn. It hurts but it works! (And you'll get more vascularity too.)