8 Tips To Help Figure Competitors Look Their Best On Stage!

You've spent months preparing your body for a figure competition. How can you ensure that you will look your best on stage? We asked some industry pros and uncovered 8 tips to help you sparkle on the stage. Try them out.

You've spent months preparing your body for a figure competition. How can you ensure that you will look your best on stage? We asked some industry pros and uncovered 8 tips to help you sparkle on the stage:

In a figure competition, you need to have the right moves. Shannon Leroux,

Pro Figure Athlete and Pro Fitness Model, says, "This is a sport like no other because there are so many different components." Your physique might be up to par, but you have to master other elements including

"First, know your six mandatory poses really well," advises Leroux. The judges will also ask you to showcase one of the six poses, so choose wisely. "Know what is the best pose for your body and be able to move into that pose flawlessly," says Leroux. She suggests practicing everyday. "Practice in front of the mirror, but then practice away from the mirror and in front of other people."

Also, have a well-rehearsed relaxed pose, a pose used when you're on stage waiting for other competitors. Leroux says, "Remember to never drop your smile and maintain your relaxed pose. Even when the judges are assessing other competitors, someone could still be watching you."

Leroux also advises competitors not to rush through their routine. "Practice to keep your movements fluid and breathe, Leroux says. "You have one opportunity to showcase all the work that you have done." 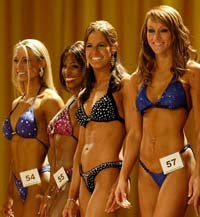 Click Image To Enlarge.
Have A Well Rehearsed Relax Pose.

2. Bond With Your Suit Designer:

While you will never be judged on the suit you are wearing, how well it fits and complements your physique can have a big impact on your overall look and confidence. The suit you wear on stage should showcase your best assets. A custom suit designer can create a suit that's tailored to your body. 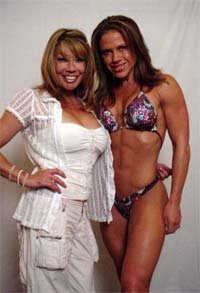 Click Image To Enlarge.
Trust Your Suit Designer To
Choose The Right Style For Your Body.

You should contact a designer as soon as you know you're entering a competition, or at least two months in advance. Also, Leroux says, "Have a good relationship with your suit designer and be confident that they can choose the right style for your body type."

"The Suit You Wear On Stage
Should Showcase Your Best Assets."

A veteran competition suit designer Karen Phillips, believes that choosing a suit style should also be a collaborative effort. "You and your designer are working together," says Phillips. She suggests trying on a variety of suit styles with your designer. Then the two of you can decide which one fits you best.

A competition suit should fit you like a glove. Phillips says, "You have to feel one-hundred percent

in the suit you are wearing. Otherwise, you won't feel confident when you walk on the stage." If a suit doesn't fit you properly you can receive deductions from the judges. A suit that's too small may also result in demerits - as your suit must adequately cover all "private" areas of the body - if it does not meet the spec requirements of the competition. 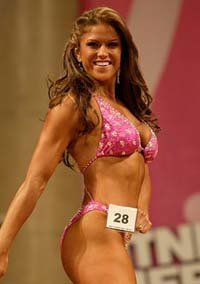 Click Image To Enlarge.
You Have To Feel Confident In Your Suit.

When it comes to quality, Phillips says, "Suits should be made of the best quality fabric with flattering adornments/crystals, when allowed." Just don't go overboard. "Too many crystals can be distracting for the judges. You want to sparkle on stage, but you don't want it to take away from the look of your body," says Phillips. Also, choose a vibrant suit color that makes you stand out in a crowd.

A pale pink that looks beautiful up close, for example, may appear white under intense stage lighting and cause you to look washed out. Finally, Phillips tells competitors that you don't need to spend a fortune on a suit. She says, "Stick to your budget when it comes to your suit. No matter what your budget is you can still look amazing on stage."

Before you get to the stage, practice your walk. Sheri Newton, WNSO Pro, 2006

Figure North American Champion and FAME Fitness Model athlete says, "As much as you work on your body and

you should also be practicing your walk and your poses in the shoes you're going to be wearing on stage." 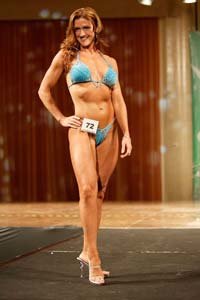 Click Image To Enlarge.
Practice In The Shoes You Will Be Wearing On Stage.

This will give you time to get comfortable in your shoes. "Don't put on heels you've never worn the day before the show," says Newton. "When I first started, my coach had me walking in my heels weeks before the show." When selecting a pair of shoes for the stage, Newton suggests a clear or neutral tone. "The stage look doesn't come together in colored shoes," she adds. In fact, colorful shoes can actually take away from the whole body.

Newton says, "You have to work so hard to get your body in shape, you don't want to go on stage looking blah." She advises competitors to visit a cosmetics counter before the show and have a makeover. Then practice their make up application.

For hair care, Newton tells competitors to have perms or color done about a week before the competition. "You need to give yourself time for corrections if needed," says Newton.

She also recommends hair attachments, such as ponytails or hair clips. "Hair attachments can add sophistication to a hairstyle," she says. "And that's what I do with my hair." It's practical and easy to apply. "When you get to a venue, the last thing you want to do is spend a lot of time on your hair."

"The most important thing I've learned is to expect the unexpected," says Newton. This motto has served her well. During one competition, Newton remembers, "I messed up my suit with tanning product and I had another suit. I didn't have to worry about cleaning it off."

"Bring An Extra Suit, Self-Tanner,
Cosmetics And Anything Else You Might Need."

She has also seen competitors rip or misplace a suit during a competition. To avoid problems, she advises people to come prepared. Bring an extra suit, self-tanner, cosmetics and anything else you might need. "If you're doing a routine, have extra music," says Newton. "I bring 4 CDs." She makes lists of everything she needs for the competition, so she can focus on doing her best performance on stage.

Another piece of advice is to be prepared and polished. Finally, you want to pay attention to the details to give yourself that extra polish. Get a manicure and pedicure before competition day and make sure you have practiced using your 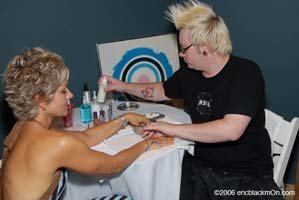 Click Image To Enlarge.
Get A Manicure Before Competition Day.

"You want to get an idea of how it works before hand," she says. "Test it to see how many coats it takes to achieve the color that's right for your complexion."

Bring friends to your competition. They can be your own personal cheerleading squad and boost your spirits. A friend can also help you stay organized. "Each competition, I have been fortunate enough to have my friend help me stay organized," says Leroux.

Her friend helps make items easy to find and accessible by putting them into clear bags. She also bags and labels her competition outfits, which helps a lot. "You really need to stay organized," Leroux says. Having someone take care of these small details makes a big difference.

Sometimes a small thing like a missing earring can distract you from concentrating on your stage performance. Leroux says, "In this kind of thing, the devil is in the details."

It's your big moment on stage. Don't forget to enjoy it. Leroux says, "My biggest tip is to smile, smile, smile on stage. Walk on stage and absolutely love being there, and know without a shadow of a doubt that you've done you're very best on stage." 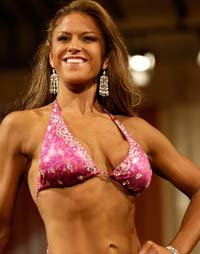