Enjoy the column and be assured that what I tell you is as accurate as it gets. With that being said lets get started with column #6.

NOTICE! These opinions are NOT necessarily the opinions of Bodybuilding.com. These are the opinions of an anonymous IFBB Professional bodybuilder. We feel that there should be a place for this unbiased information to come out. If you are a pro bodybuilder or well known personality in the industry and would like to give your opinions (anonymously or not), please contact us. We want to be 100% fair to all.

What's up everyone? I just want all you people out there in the bodybuilding world to know that I have been hearing a lot of talk in the industry on who IFBB Pro Undercover is? I've heard a few names and you're way off. Enjoy the column and be assured that what I tell you is as accurate as it gets. With that being said lets get started with column #6.

E-mail me your questions at ifbbpro@bodybuilders.com.

Did you attend the USA Championships? If so what did you think?

Not only was I at the USA but also I was sitting in the front row during pre-judging. Kris Dim in the light heavy class should have won the over-all with absolutely no problems. Also, Marcus Hailey kicked Troy Alves ass but the judges again didn't see it that way. The super heavy weight Idrise Ward-el won the class but doesn't have what it takes to stand on a pro stage. He is very narrow and as usual came in with soft looking muscles that seem to have no maturity. Ward-el was over heard in California saying he was going to place top three in next years Arnold Classic and Olympia. Please, just get on a pro stage first and see what happens before you start running that mouth. Top three in any pro show next year will be a miracle, Idrise. So, what did I think of the USA? Kris Dim won the overall without a doubt and was the only man on stage that had what it takes to stand on a pro stage.

My arms are lacking in size. Should I try using site injections or synthol?

Absolutely not. Site injections do not cause muscle to grow. They simply cause inflammation to the area, which in turn fills up with fluid. Continuous site injections will cause irreversible damage from scar tissue forming and surgery will be the end result. Many pro bodybuilders are getting marked down for site injections that are very apparent. Ernie Taylor's triceps are a good example of what site injections can look like. Also take a good look at Kamali's shoulders, Nassar's rear deltoids, Cicherillo's arms and worst of them all, Paco's shoulders. This man in particular should NEVER be placing in pro shows, never!

What did you mean that some of the pros (in column #5) that pose for gay clients are of royalty?

I meant that some of the guy's last names are names used to describe people of royalty. And one pro who's last name rhymes with gay supplements his income by posing for gay clients for many years now. I didn't mean that the athletes in mention were literally of royalty. Read between the lines man.

I was wondering how much do bodybuilders usually spend on supplements (legal / non-legal)? Is it a whole lot of money and is it hard to be in the industry without some kind of sponsorship? Could this have been one of the reasons why Lee Priest was out for a while?

Well, it has been in my experience that it runs anywhere from $3000-$4000 to prepare for a pro bodybuilding show for a 10 week prep period. That's not really bad if you can place in the top three of the event you're preparing for. You can usually double your investment. In the Olympia if you make top ten you've already made a $7000 profit. So I guess it's all-relative. As far as Lee Priest is concerned, aside from the heart problems he had, also lost his Prolab endorsement, which in turn made him sit out a few shows until he got another source of income. To be a pro bodybuilder you have to have endorsements to make a living and afford the costs of competing. Personally if you're not making a profit at competing, I wouldn't be competing anymore. Unless of course you're a pro bodybuilder as a hobby but I don't know of any good pros that are doing it strictly for fun.

Since all IFBB pros juice, how do they get away with drug testing at shows?

The same way that pro baseball players are getting away with it, pro football players, hockey players, tennis players, Olympic athletes and so on and so forth. People shouldn't be so concerned with how bodybuilders get away with using steroids when there are so many more athletes in other sports using the stuff and believe me when I tell you they are! How about a much larger issue. How in the hell are law enforcement officers using steroids? I personally know many cops that are using steroids. Mr. Olympia of present day is a police officer for Christ sakes! There is nothing worse then a hypocritical cop using the juice and busting people for the same thing.

What do you think of Tommi Thorvildsen and Marko Savolainen? Do you think these two Scandinavians have a chance of taking a title on the pro stage?

I wouldn't think so but I've seen some pretty idiotic decisions as far as the judging is concerned. Thorvildsen has striated glutes, period. If you take away those glutes that the judges are so mesmerized by all you have is a blocky physique that lacks thickness with a torn pec muscle. I've only seen Marko once and I can assure you he has no future in competitive bodybuilding anytime soon. But, then again George Farah is doing the Olympia.

What do you think of the Bob Chicarello phenomenon? Do you really think he is top five quality? 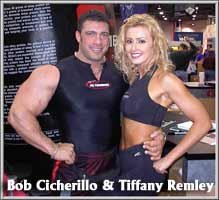 You know, I've been trying to figure out this one myself ever since I seen him take fifth in the Toronto Pro show last year. Here is guy that was seen by many of his fellow competitors eating with the head Judge Jim Rockell the night before the Night of Champions where Bob took second. This is one bodybuilder who is placing when there is nothing going on with his physique. I personally think Chic kisses the right ass to get the placing he has been getting. Bob comes in soft, his legs are really funky, his arms have no separations, he has no striations anywhere on his physique and the synthol use is becoming very apparent. It took the man 14 years to turn pro which tells you something about his body, wouldn't you think?

Stay tuned for the next edition of IFBB Pro Undercover where I talk about Shawn Ray's ambition of becoming the IFBB Athletes Representative in all negotiations with the organization. I am one pro who won't be signing anything that has to do with Shawn Ray.

Don't forget to e-mail your questions to me at ifbbpro@bodybuilders.com right away! See you next month on Bodybuilding.com.

DISCUSS THESE ISSUES IN OUR POPULAR FORUM!

Learn the truth about the bodybuilding underground.