To The Extreme: 6 Diets From The Edge

The quest to lose or gain weight can take people above and beyond the realm of normalcy. These six diets will make your low-carb Paleo diet look like kid’s stuff.

We live in a fast-paced world. Everybody is looking for the quickest fix, the fastest information, and the speediest way to shed pounds. Although we know that balanced nutrition and exercise is probably the best way to go about losing weight, there are some who take dieting to extreme levels. Some are successful—for his latest role, Matthew McConaughey lost like 30 pounds in three hours. Others fail, relapse, or start over.

The list of insane diets is long and chock-full of weird. But even amid the muck of unsafe, unnatural ideas sit gems of applicability. Here are the best tips from the worst diets.

Who doesn't know somebody who has tried this diet/cleanse? It's found a popular place in celeb news and YouTube diet reviews. The rules are pretty simple. No solid foods or supplements. All you get to ingest is a magic elixir. 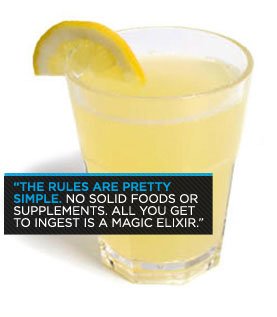 Cleanses aren't scientifically proven to do anything1,2. Most research shows that the body is perfectly capable of ridding waste on its own. Furthermore, research suggests that cleanses upset the natural chemical and hormonal balance of the body.

Concerning weight loss, docs speculate that detox diets aren't really necessary, and that whatever weight is lost from an all-liquid diet will tend to come back.

The reasoning behind "detoxing" is to get rid of the waste, chemicals, and unnatural products that end up in our bodies because of food. If you're concerned about pesticides and lab-grown DNA in your food, try eating organic.

As far as weight loss goes, if you're not getting the results you want from six small meals per day, try the other end of the frequency pendulum—intermittent fasting. Here, you strategically eat once per day, or within one daily window.

Yep, it's exactly what it sounds. Your food is delivered through a feeding tube instead of through the actual actions of chewing and swallowing3,4. The feeding tube, which is connected to a bag of fluids, goes in the nose, down the esophagus, and into the stomach. The bag of fluids contains the selected amount of calories you'd need to lose weight (500-800 calories).

The fluid bag is filled with a high-fat, high-protein, low-carb mixture, sending your body into ketosis. It's advertised that through this diet, you can lose 20 pounds in 10 days.

This diet isn't meant as a long-term lifestyle fix. It's a crash diet. And it's an expensive crash diet.

There are also a few nasty side effects that can occur from having tubes shoved down your throat for so long, including halitosis, nasal drip, cough, and infection.

Try a more traditional ketogenic diet. The low-carb, high-protein, high-fat diet replaces glucose with ketone bodies as an energy source. Combining a ketogenic diet with exercise is probably a much smarter long-term plan than having a doctor shove a plastic tube down your nose. 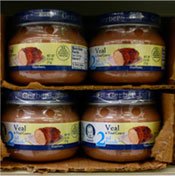 The theory is that bland, mushy baby food in portion-controlled jars will prevent you from overeating, or from really enjoying your food for that matter.

Fourteen servings of baby food equals out to approximately 1,000 calories. With that much of a calorie deficit, you'll probably lose some excess weight.

Adults' dietary needs are much different than those of babies. Sure, most baby food is low in fat and sugar, but it also lacks fiber, calcium, and vitamin D.

Mashed-up food might also play some tricks on your, uh, digestive system. Nutritionists say that it's just another gimmick. If you're smart about your portions, there's no reason you need to spend extra money on baby food7.

Baby food has been used in the pre-contest bodybuilding community for years. It's also used in healthy cooking techniques because it's generally nutrient-rich and made without additives and preservatives6.

If you don't want to go on the whole-hog, baby-food-only diet, try to swap high-calorie, high-sugar snacks for jars of baby food.

You can eat anything you want on this diet, but the idea is to severely limit yourself. Want a cheeseburger? Sure! But you can only have five bites. The point of this diet—much like the point of all other diets—is to limit your calorie intake.

While this diet can certainly help you if you have "portion distortion," don't treat it as a long-term solution. 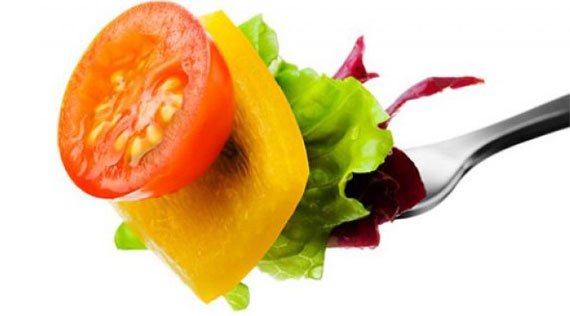 Once you hit your goal weight, you can go back to your normal Big-Gulps-and-nachos eating habits. Can you say yo-yo diet? Furthermore, the diet actually calls for a multi-vitamin to make up for the essential nutrients you'll be missing.

The purpose of a vitamin is to fill in occasional gaps, hence the word supplement8. If you're relying on a vitamin to make your body work correctly, you're asking for trouble.

Portion control, baby! Much of our wonderful country's weight problem has to do with the sheer volume of food we shove in our mouths.

Although this diet takes portion control to giddy heights, we can use the idea to make smarter decisions about how much food we eat. No, you do not need four sweet potatoes—one, or even half of one, will do.

To gain weight, you gotta eat. For some people, eating enough food to get huge is really difficult. Enter, the "Gallon Of Milk A Day" plan. On this diet, you'll get a gallon of whole milk—good for 2,400 calories, 200 grams of carbs, 120 grams of fat, and 120 grams of protein—on top of the four whole-food meals you'll be eating9. If you're consistent, you can most likely expect to gain the weight within 1-2 months. Say "sayonara" to skinny!

Even if you're on an insane training program, a lot of the weight you'll gain will be fat10. Expect to gain 2-3 percent fat mass per month. You should also expect to feel really full all the time.

Another downside is boredom. It's difficult to drink a gallon of water per day, so imagine chugging down an entire gallon of milk! You may also want to pay attention to how your body reacts to dairy. If you're intolerant, or don't digest it well, you're not going to feel very good.

People have had success on this diet; it's really difficult not to gain weight when you're consuming so many calories. It's particularly beneficial for hardgainers like high-school guys who want to bulk up before football season.

It's also fairly inexpensive for the amount of protein, fat, vitamins, and minerals you'll be getting. Even better: according to one study, ingesting milk can increase protein synthesis—hooray for muscle building11! 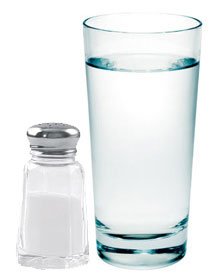 Ah, the French. Instead of actually chewing and swallowing crepes, croissants, and beef bourguignon, the new diet fad is to pretend to eat.

It was inspired by a Dolce & Gabbana campaign that featured pictures of Madonna holding food to her mouth, but not actually eating12.

Enjoy your cup of steaming chicken noodle soup: smell it, feel the warmth, pretend to put it to your lips, just don't actually eat it. Instead of food, you get to have water and a salt-soup concoction—delicious.

Once again, this isn't a long-term plan, but rather a super-low-calorie crash diet meant to shed poundage quickly13.

There's no exercise plan attached to this diet, nor is there any other nutrition other than water and salt. All in all, this diet is bad news.

Although it's difficult to come up with anything positive about this diet, one can take from it the idea that food is an experience. Of course, at its most basic level, food is fuel. But, instead of pouring it into a bowl and going at it like a dog that hasn't eaten in days, your body actually benefits from slower eating habits.

Smelling, tasting, and chewing slowly can activate hormones that signal satiety and pleasure more quickly than when you fit an entire ham sandwich in your mouth14.

[ VPX To The Extreme Main Page ]