The Science Of Attraction: Why You Can’t Help But Look

Have you ever met someone you're mysteriously attracted to? Want to know why you find that person sexy? Here are some answers!

What makes one person attractive to another is a deep, murky pool of mystery. Our preference for partners is not universal—not everybody agrees that Jessica Simpson is a perfect 10. Almost every person is born with two eyes, a nose, and a mouth, yet cultural, economic, and evolutionary principles have shaped how we value and rank the desirability of those features.

While scientists have done their damndest to piece together the puzzle that is human attraction, there's no telling exactly why I think David Bowie is hot. And that, my friends, is what we call a first-world problem.

Despite the enigma, the scientific community has come up with a few ideas. Evolutionary psychologists, social scientists, and anthropologists may not exactly agree about what attractiveness is and how it works, but each field offers clues. With them, we can at least partially explain why glutes are sexy.

Before this world of cities, cars, and technology, there wasn't much other than trees, antelope, and men with spears. For clans of humans to populate, they had to … do the deed. 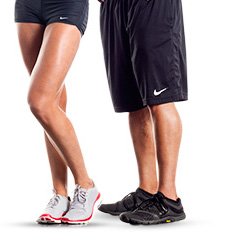 Evolutionary scientists believe that early humans were attracted to others who had signs of "heritable fitness."5 "Fitness," in this sense, means the ability to survive. By choosing a mate with good genes, the resulting offspring would be more likely to be healthy and fertile.5

Let me put it this way: If Gronk has long arms and can throw the spear far, Gronkette is more likely to seek him as a sexual partner because those long arms could potentially pass to her children. Gronk will get lucky because his "fitness" is necessary for the survival of his clan.

Evolutionary theorists also posit that humans have made adaptations in our cognitive abilities to choose partners.5 Today, Gronk would probably be S.O.L. His long arms certainly couldn't offer a woman of the 21st century the emotional, spiritual, economic, or intellectual needs she requires.

His "fitness qualities" aren't necessary for survival. Because our world has evolved, we've made changes to what we look for in mates. Instead of spear throwing and child-bearing hips, a contemporary person may look for a partner with financial stability, kindness, or similar values.

Although we've adapted and don't spend all of our time focused on the physical aspects of our future partners, we still respond to cues from sexual characteristics. A 2007 study found that women were more likely to find muscular men sexy.2

Now, before you go running to the nearest dumbbell rack, know this: The study also found that women were not as attracted to men who were "highly muscular." In the general population, bodybuilder physiques aren't exactly popular. Moreover, muscular men were described by women as being "dominant," "volatile," and "less committed." Women also rated men with moderate muscularity as most attractive.2 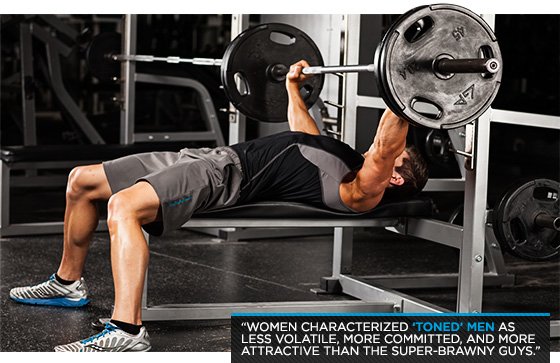 Oh, don't worry, muscles are still helpful. The same study found that men who characterized themselves as muscular reported that they had more short-term sexual partners, more affairs with mated women, and more lifetime sex. (And you thought you were doing bench press for your pecs.)

From what this study reports, it seems that women who look for "short-term" sexual relationships are into bulging biceps. For long-term partnerships though, women may be more interested in less massive men. Women characterized "toned" men as less volatile, more committed, and more attractive than the super-brawny guys.

Muscles aren't the only cues that signal good heritable traits. The waist-to-hip ratio (WHR) is one of the best indicators of attractiveness in women in almost all cultures. Women who have a lower WHR (.6-.8) are generally found to be more attractive.1 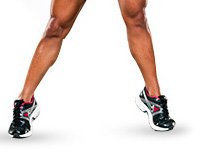 This attractiveness may stem from the fact that women with lower WHR are also associated with better reproductive outcomes, higher likelihoods of conception, and fewer endocrinological and metabolic diseases.1,4 Studies that use BMI or breast size as factors from which to evaluate female beauty have been less successful in discovering consistencies among various ethnicities.1

Not so fast there guys, you're not off the hook. WHR is also a factor in how women judge a man's attractiveness.6 Men with a WHR in the .85-.95 range are deemed the most attractive. Overweight and underweight males were perceived as less healthy and more prone to illness.6

In short, by maintaining healthy eating habits and consistently training, you're making the outside of your body show how healthy it is on the inside. From a baby-making perspective, that means you appear more able to create new life. Hooray for procreation!

There are other indicators of heritable fitness. Studies have measured jaw size, scent, height, facial averageness, and intelligence (to name a few) as indicators of attractiveness.5 The problem with many of these studies however, is that they can't account for the differences in how cultures view and value beauty.

More important, they don't answer the question of how we link the evolutionary concept of male and female attractiveness to the contemporary world. If you've tried dating in the last five years, you know that partner making today is much more complex and difficult than it was for Gronk.

Our culture influences how we look at each other. In the United States, we're constantly told and showed that men should be big and women should be little.

Today, both men and women struggle to lose enough fat or gain enough muscle to make themselves fit into the perfect frame.3,4,8 From a historical standpoint, the media's illustration of the ideal is arbitrary, changes depending on the economic landscape, and is mostly used make money.

In the 1800s, for example, diet books were marketed toward men.7 Women during that time period were too frail to exercise and were told that plumpness was necessary for healthy child bearing.7 You mean it was OK for women to lay around and eat chocolates? Sigh. I was born in the wrong century.

We know that people internalize images of the ideal body3, so that means your expectations for your partner and yourself may not be attainable. Despite the strong influence culture has on our psychology, you choose whether to abide by its arbitrary rules.

In reality, the answer to "why am I attracted to David Bowie?" is complex, perhaps even unanswerable. But at least I can comfort myself with the knowledge that it's probably, at least in part, a combination of my biology, my culture, and my cognitive ability to recognize that he may have fitness traits that could pass on to my children. Plus, he's the Goblin King.