The 23rd Arnold Classic: History Will Be Made.

This year’s winner will join some pretty illustrious company. So who will it be?

The 23rd Arnold Classic: History Will Be Made

It's not the Olympic Games--but it's even bigger. Start with 175,000 fans supporting 18,000 athletes, competing in 44 sports. With sports ranging from MMA to gymnastics and judo to the strongman, the world's finest athletes will brave the chill of Columbus, Ohio to compete in the The Arnold Sports Festival.

But there is one sport in Columbus that takes precedence over all others and that sport is, of course, bodybuilding. Why shouldn't it? The event is named after the most famous bodybuilder of all time, the one and only Arnold Schwarzennegger.

There have been fourteen men who have taken the title in Columbus over the past 23 years, many of them the living legends in the sport of bodybuilding.

Former Mr. Universe and Mr. Olympia runner up, Rich Gaspari won the contest. Known for his thick striated muscle, Gaspari set the bar high for all who were to follow.

Click To Enlarge.
Gaspari Set The Bar High For All Who Were To Follow.
1990: Mike Ashley Wins By Default

Ashley was known for his great symmetry and conditioning.

He was beaten earlier in the year by Shawn Ray at the Pro Ironman, but Ray failed the first ever pro bodybuilding drug test at the Arnold and had to forfeit his prize money and the coveted Arnold trophy.

The runner up, Mike Ashley, having passed the doping test became history's champion.

1991: The Triumphant Return Of Shawn Ray

"Sugar" Shawn Ray, after losing the title in 1990 due to a doping scandal (well at least that's how the magazines played it at the time) he came back to prove that he was the rightful champion.

Ray went on to place 3rd in the Mr. Olympia, doping test passed he went on to take the title and keep it in 91. 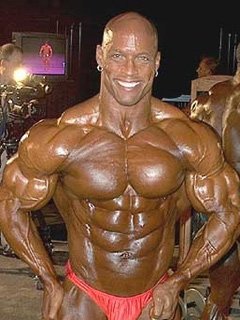 Vince "The Terminator" Taylor turned pro later in life than some if his fellow rivals such as Kevin Levrone, Dorian Yates and Shawn Ray and displayed a level of muscle maturity that had not been seen on an IFBB stage in some time.

Ken "Flex" Wheeler, arguably the best year in his career, Wheeler won everything he entered except the Olympia where he placed 2nd to Dorian Yates. 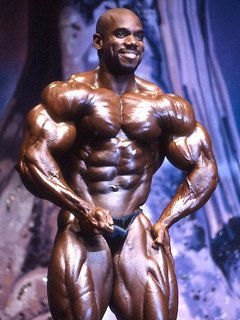 Click To Enlarge.
Wheeler Would Go On To Set The All Time
Record For Most Wins At The Arnold.
1994: The Maryland Muscle Machine

The "Maryland Muscle Machine," Kevin Levrone was the new force in bodybuilding. Winning his pro debut and going straight to a runner place at the Olympia, Levrone was the man to beat.

He took the Arnold title again in '96 adding to his record-breaking number of IFBB Pro victories.

Mike Francois was a mountain of muscle; the former priest in training displayed a thick and striated physique. Francois was one of those athletes pushing the boundaries on freaky mass in the mid 1990s.

He retired from professional bodybuilding shortly afterwards to pursue a more spiritual calling.

Nasser El Sonbaty pushed Dorian to the limit at the Olympia, but didn't have that edge to beat out the champ, finishing as high as second.

His Arnold victory was the pinnacle of Sonbaty's career. 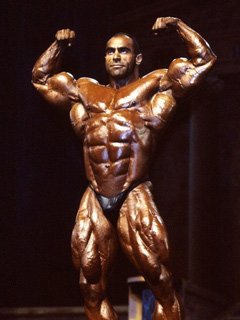 Click To Enlarge.
His Arnold Victory Was The Pinnacle Of Sonbaty's Career.
2001: Ronnie Coleman Competes At The Arnold

Ronnie Coleman was the first reigning Mr. Olympia to compete at the Arnold.

His dominance over his fellow competitors didn't let up and the most decorated bodybuilder in history took home the Arnold trophy, his $100,000 check, a Rolex watch, and brand new H2 Hummer; not bad for a day's work.

Jay Cutler is the only man to win three titles in succession. Jay dominated this contest before deciding to focus on the Olympia where he went on to dethrone Ronnie Coleman.

Dexter "The Blade" Jackson" was the first "light" bodybuilder to win this contest since Shawn Ray. His crisp conditioning and sharp lines earned him the second most coveted title in bodybuilding on three separate occasions.

After his final victory in 2008, he went on the beat Jay Cutler and become Mr. Olympia.

Victor Martinez and his superior mass and symmetry were enough to beat out defending champion Dexter Jackson.

Billed as the number one contender for the Mr. Olympia title, Martinez later placed a highly controversial 2nd to a notably off peak Jay Cutler.

Kai Greene, the predator had it all; freaky mass and conditioning, great balance to his physique and the Olympia title locked in his sights. He had two attempts at the Arnold ending in two sensational victories.

The stage is set this year for a new champion to be crowned.

Will it finally be four-time Most Muscular award winner Branch Warren? Will Dexter Jackson match Flex Wheeler's all time record of four titles or will rookie Evan Centopani upset the veterans like he did at the Flex Pro?

Let's take a look at the competitors:

By the time Saturday morning comes and prejudging is underway, the fans are going to truly get their money's worth. With five athletes that have what it takes to actually win the title, it is going to be a hard fought battle and the judges will have their work cut out for them.

I am going to go out on a limb here, look into the crystal ball I stole from the gypsies back in Ireland and predict the top 6:

I don't think he will leave anything to chance; we are going to see the best Branch Warren we have ever seen.

I think his combination of mass and conditioning will be enough for him to warrant a battle for first with Branch.

He will be sharper than what he was at the Flex pro, but it won't be enough to out muscle Branch or Evan.

After a disappointing Olympia, Roelly should be in the best shape of his life. If he is, he will find a place in the finals for certain.

Beaten by Abiad in L.A, I think the battle between them will continue, although I feel with a little more conditioning he could get the edge.

Although much improved from last season, this contest is going to be about conditioning so he will need to be a little sharper than last week if he is to place higher.

So there you have it, my predictions for the 2011 Arnold. We will have to wait until Saturday night to see if my crystal ball actually works. See you all in Columbus!