Learn all about new IFBB Pro Mindi O'Brien and how life was in Canada, future plans, what she would change to make the sport more popular and more...

The Canadian Bodybuilding Federation National Championships on July 3rd, 2004 was a defining event in the career of bodybuilder and fitness athlete Mindi O'Brien. For eight long years, O'Brien trained and competed in various shows, constantly striving to evolve and refine her physique. On July 3rd, 2004 O'Brien realized her dream of becoming a professional by earning her IFBB pro card with a first place finish at the Canadian National Championships.

Sportlab Nutrition's founder and CEO Trent Hinde realized O'Briens potential, and quickly signed her to an exclusive contract. Hinde remarked that O'Brien is "Canada's best" and that her future is limitless. Widely touted as Canada's best-ever female bodybuilder and fitness athlete, O'Brien's physique is symmetrical, vascular, and exudes a strong female sensuality.

All success stories begin with a dream - a hope - and are accomplished by hard, dedicated and consistent work based on uncompromising efforts fueled by passion. O'Briens story is one of success in the face of adversity, and her story proves that all things are possible when you are willing to work hard, and when you surround yourself with people who are willing to work hard for you.

Mindi has an extensive and impressive contest history, and regularly appears on radio, magazine and television media as a competitive athlete, a fitness consultant, and, as the founder of TeamObrien, Mindi is a recognized exercise expert.

Many people think of the stories of Arnold Schwarzenegger, Franco Columbu, Sergio Olivia and Steve Reeves and believe that all things are possible through the bodybuilding lifestyle. The rise of Mindi O'Brien to professional status proves that all things are indeed possible

[ Q ] To start things off, why don't you tell us a bit about yourself. What is your age and where are you from?

[ Q ] Were you active when you were younger?

I was always very active as a child. I participated in gymnastics and track and field. I competed provincially in gymnastics for fifteen years.

[ Q ] What were the reasons that you began training?

I broke my arm when I was ten years old and my gymnastics coach hired a personal trainer to help keep me in shape, keep me focused, and help speed up the recovery rate. I was fascinated with how the body responded to weights and I loved the pump I felt after my workout.

From there, I was hooked!

[ Q ] At what age did you first realize that fitness and bodybuilding were for you, and how long after that did you begin competing?

I had my son Alex when I was 18. I wanted to be a positive role model for him, so being fit seemed obvious and getting involved with competitive fitness helped keep me to stay focused and motivated, while still using my gymnastics skills.

[ Q ] What people in your life have been inspirational and supportive?

My mother has always been an inspiration to me. She raised both my sister and I on her own. Things were always financially tough for her and yet my sister and I never seemed to go without. She worked two jobs to support us, she always kept her chin up, encouraged us to believe in our dreams and she made sure we knew were loved.

My fiancê Dennis is my biggest inspiration and my biggest supporter. Dennis is a weight-training guru and has been studying the female high performance athlete for over twenty years. He is my training partner, coach, nutritionist, chef, business partner and my best friend for the last eight years. I never want to let him down, so I make sure I give 110% to everything I do.

[ Q ] You recently earned your pro card at the CBBF Canadian National Championships on July 3rd, 2004. This must have been a surreal experience! Going into the competition, what thoughts were going through your mind? Were you thinking about winning the pro card, or were you focused on doing your best?

I won my height class and I also won the overall title. I made my Pro Debut at the SW USA Pro Cup in Dallas on August 7th. My goal going into my first pro show was to place in the top half, perform solid routines and just gain some experience competing with some of the top fitness pros. As far as doing my best, we constantly work on my weaknesses, so I hope each show continues to improve. 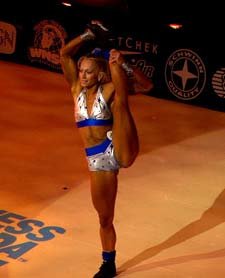 At the Fitness America contest.

[ Q ] Aside from this competition, how many competitions have you been in, and how did you place?

I have competed as an amateur athlete since 1999. I have competed in a total of fifteen competitions, consisting of one bodybuilding, two strength and fitness challenges and the rest fitness competitions. I won eight of them and placed in the top five in the remainder.

[ Q ] When you think about your successes in this sport, what one quality do you think has been the most important to your success?

We made a plan eight years ago to turn professional. Our plan was to get experience and popularity as an amateur, and not turn professional until we felt my body and routine would make an impact. We were in no hurry to spend money, time and disappointment on not being ready to set a high standard. But most of all, along the way we were constantly being given all kinds of advice about what we should be doing, we always, always, stuck to "our" plan.

[ Q ] What gives you the drive to continue competing?

I am an athlete and I love to compete.

[ Q ] Based on your experience, what do you think is the biggest mistake that novice athletes make early on in their careers.

Too many athletes in this sport seem to have "off seasons" that consists of long gaps away from the gym-look, if you diet down, which almost anyone can, all you're left with is the muscle you developed during the off season.

But, I think the biggest mistake is that too many girls want to turn pro too fast. It takes time and a lot of hours in the gym to put on mature muscle.

Most of these questions have been previously answered, although, yes, competing in fitness is a lifestyle. It is not something that you can just fit in when you have some free time

[ Q ] What do you think are the reasons for the over emphasis on male bodybuilding? Is it just that we, as an industry, haven't gotten the message out about the female side of the sport? Or, do you feel there is more to it?

I don't think there is an over emphasis on male bodybuilding. It's been around for thousands of years if you really think about it. Of course, Arnold helps with that! Women's muscle/physique contests need more mainstream venues, and the rest of the world will see the beauty.

[ Q ] If you could change anything about female fitness and bodybuilding today, what would it be?

[ Q ] As a female athlete, what are some of the barriers that you have faced - that your male counterparts have not faced - both in your personal life and as a competitor?

[ Q ] You are working with SportLab and SportLab CEO Trent Hinde. I know Trent, he's a good guy, and his products are great. What has working with him been like for you?

Working with Trent and the Sportlab Team has been a great experience. Trent is a huge supporter of the CBBF organization and will go the distance to make sure all of the Sportlab Athletes are well taken care of. Sportlab has been around since 2001, and Trent is making sure that Sportlab is constantly expanding and developing new and innovative products. He has become a really good friend.

Sportlab offers a wide range of products. I have watched this company grow from day one, and I have seen them produce some of Canada's top-level athletes. It proves that Sportlab supplements work. I want to thank Trent Hinde and Doug Schneider for encouraging me to fulfill my dreams and supporting me every step of the way.

[ Q ] You are preparing for the Fitness Olympia in Las Vegas in October. How are your preparations going and what expectations do you have going into the show?

My preparation for the Olympia is going well. I expect myself to be in better shape, with a better routine. I should be competitive.

[ Q ] When you look at your career and how far you have come so far, where do you see yourself five years from now?

It's taken eight long years to finally reach my goal - an IFBB Pro! I hope to still be competing on the Pro Circuit.