Using this method, the test subjects added an average of 9.0 pounds of new muscle (one subject added 28.9 pounds!) in just 10 weeks and increased their full range 1-rep max by 27.6%. Learn how...

Bear with me for just a second while I say something mathematical: In exercise, intensity is inversely proportional to duration. Simply stated, the greater your effort, the less time you can sustain it.

That's why a 100-meter sprinter can run faster than a marathoner. The tradeoff is the sprinter can only run all out for ten seconds but the marathoner can keep running for two hours.

Now take a look at their legs. The sprinter has the thick, powerful leg muscles and the marathoner has much thinner legs. And the sprinter builds those massive muscles using a "dose" of exercise that is ten seconds or less. Isn't that interesting?

So if you're in the gym trying to develop thick, powerful arms or a thick, powerful chest why are you grinding away for hours? Why not try to discover the minimum dose of exercise that will deliver the highest possible intensity?

After the success of Power Factor Training in 1993, we realized that limiting the range of motion in an exercise was an effective way to increase intensity. Basically, a subject could gain more muscle lifting 200 pounds a few inches than he could by lifting 100 pounds through his full range of motion.

Once we knew full range of motion was not very important in stimulating muscle growth, we created a study to see what would happen if bodybuilders used zero range of motion but with the heaviest weights they could possibly hold. We recruited some hardcore bodybuilders who had already developed impressive physiquesâ€¦so it would be extra challenging to put new muscle on these subjects compared to average subjects. We put them on a routine averaging just 2.1 workouts per week where subjects statically held heavy weights (without any up and down movement) in their strongest range but without being "locked out".

After just 10 weeks of Static Contraction Training, these subjects:

When was the last time you made gains like that in 10 weeks?

Since the above study, we have conducted more studies using various refinements that have proven the benefits of reduced hold times and a corresponding increase in intensity. For example, the above results were achieved using hold times of 15 to 30 seconds but now we know hold times of less than half that duration work even better. (See the TRAIN SMART! e-book.)

This form of minimum dose, maximum intensity training has been widely hailed as revolutionary. Ironman Magazine said Static Contraction Training "could cause physiology books to be rewritten." And world renowned human performance coach Tony Robbins says it's, "The cutting edge in bodybuilding [and] strength training that can show you - no matter what age you are - how you can produce the greatest result you ever thought possible in the shortest time."

Try these two simple exercises. You'll be amazed at how strong you really are. Perform each of these exercises exactly as described. Do both of them the same day then repeat them five days later. After three sessions you'll feel the astounding effects that this level of muscle stimulation triggers. 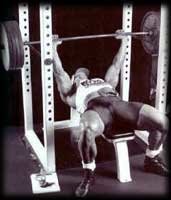 Bench Press: This exercise is performed inside a Power Rack, as pictured. Position the bar within two inches of your extended reach. Place 30-100% more weight on the bar than you normally use. Press the bar up one inch (do not lock-out) and hold for a count of 7 seconds. Experiment to find the most weight you can hold for 7 seconds. Repeat five days later with 10-30% more weight and again five days after that with another 10-30% more weight. 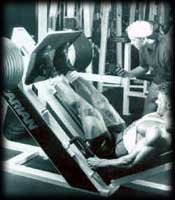 Leg Press: This exercise is performed with the safety stops engaged at ALL TIMES. Position the seat so the sled is within 2 inches of your full extension. Place 100-200% more weight on the press than you normally use. Press the sled up one inch off the safety stops. Hold for a count of 7 seconds. Experiment to find the most weight you can hold for 7 seconds. Repeat five days later with 20-50% more weight and again five days after that with another 20-50% more weight.

Push yourself to the limits of your capability. Most people using this method make the mistake of estimating the weight they can lift far too low. When you repeat these exercise expect very significant increases in weight.

The Ultimate in Muscle Growth Stimulation

Static Contraction Training capitalizes on the undisputed fact that the intensity of muscular output is more important than the duration of output when it comes to stimulating new muscle growth. It provides the "minimum dose" of ultra high intensity exercise. It's already working for thousands of guysâ€¦try it yourself and see. Learn more about this topic.

Peter Sisco is co-author of Power Factor Training, Static ContractionTraining and other books. He is also the editor of the five-book