Saved By The Kettlebell: Torch Fat, Build Strength, And Improve Cardio Fitness With One Move!

The kettlebell swing just might be the best exercise there is. Using the swing with heavy weight and lower reps will give you explosive, violent hips.

I'm used to getting weird looks from people. For starters, I'm a ginger and that doesn't help. To make matters worse, when my neighbors peek over the fence and see me training for strongman and highland games events, they wonder where I'm hiding the flying saucer.

When I enter the local gym, other patrons aren't used to seeing some of my "alien" exercises. One particular exercise than can provide out-of-this-world results is the kettlebell swing.

I begin all of my training sessions with kettlebell swings, but what I thought was now a common movement apparently still looks strange to most.

People ask me, "What is that for?" because in athletics, the main focus is on movements, not muscles. It's like when someone asks me, "What muscles does the caber toss work?"

Well, I could tell you, but the point of the caber toss isn't to work muscles; it's to throw the log, knucklehead!

The kettlebell swing just might be the best exercise there is, especially for athletes. You want a strong backside? Using a kettlebell swing with heavy weight and lower reps will give you explosive, violent hips. Fat loss?

A recent study demonstrated that kettlebell movements burn about 20 calories per minute -- more than double what spinning class or boot camp class will get you. Not to mention it can build a great ass (pardon my alien French).

You can torch fat, build strength, and improve cardiovascular fitness with one incredibly functional move.

This movement looks simple, but looks can be deceiving. The key here is hip position, as this is a hip-dominant movement rather than a squatting motion.

Before starting, I usually have athletes practice pushing their hips back.

To give yourself a target, stand in front of a wall or something similar and push back your hips until your rear touches. Return to the starting position.

Now, scoot forward an inch or two and do it again.

Keep doing it until you can barely touch and your hamstrings feel like they're going to rip off the bone. This is the correct position for kettlebell swings (or Romanian deadlifts, Olympics lifts, etc).

You want minimal knee bend, with nearly all of the movement coming from the hips. 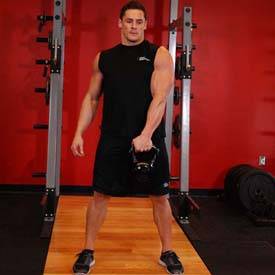 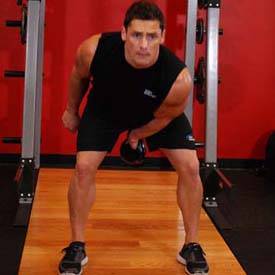 To perform the swing, you need a kettlebell!

Don't have one? You can buy or make your own adjustable kettlebell, which is really affordable. If you're still unable to get a kettlebell, a dumbbell will do.

Begin with a kettlebell in one hand and knees bent slightly.

You can place your free hand on your hip. The arm with the kettlebell should be kept tightly against the body, allowing the bell to hang between your legs.

Keep your head and chest up, and begin the movement by moving your butt back as far as you can, just like you practiced.

You might think of it as getting your butt and your chin as far away from each other as possible, while still keeping that arm close to the body. It's important that you use your hips and not your shoulders to move the kettlebell.

Once you've reached maximum tension in the posterior chain, SNAP forward with your hips to drive that kettlebell up in front of you. Squeeze your glutes hard and apply the brakes to stop the bell's momentum when it reaches head level.

On the return, don't just let gravity do the work. Forcefully pull that bell down, turning your thumb toward you during the descent.

My best advice is to aim for your junk -- just be sure to move your hips back to avoid the damage.

Let's just say that's a mistake you'll only make once.