Ryan's love of fast food took him nowhere fast, and his health suffered. A wake-up call in high school spurred his fit lifestyle and helped him drop over 50 pounds! 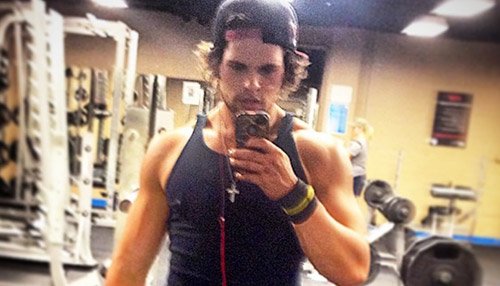 Ryan Pitts was never a stranger to the lure of dessert. "I was the one who always licked the beaters and the bowl," he says with a chuckle. "Half of the dough wouldn't even end up getting cooked because I'd just eat it raw. Desserts were the first things I'd go for."

But the stomach doesn't discriminate, and whether savory or sweet, delicious food is delicious food. For Ryan, this meant that main meals were just as much of an indulgence. "I'd get two lunches at school because I'd wolf down the first one and wonder where the entrée was," he says. "I'd think, 'Why not?' They tasted good, and I was completely blind to how my eating was affecting my health."

It wasn't until later that the reality of Ryan's situation struck a chord. Sure, trips to the New England coast in T-shirts instead of swim trunks weren't ideal—and his post-vacation farmer's tan was no treat—but those slight annoyances weren't what triggered change. It wasn't until a back-to-school shopping trip that Ryan reached a real tipping point.

What was your diet like before you decided to transform?

My family and I would eat out a lot, which was the source of the problem. A typical meal would be fast food, always supersized. I often stayed with my grandparents, and they would take us to McDonald's for breakfast. I was a fan of the sausage, egg, and cheese McMuffin meal—I would get two.

My grandparents also knew the owners of a Mexican restaurant, so we'd go there and get discounts, and they'd top off the meal with free desserts. Looking back, it was a lot, but when you're eating like that five days a week, it just becomes normal.

Describe your "aha moment." What made you change?

I was back-to-school shopping with my mother and grabbed a couple of XL shirts, which was the size I normally wore. She asked me to try them on, and I did. Except this time they were too tight. I refused to buy the XXL. 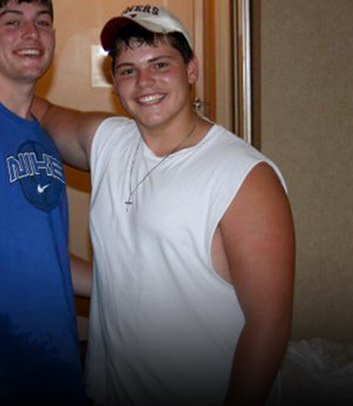 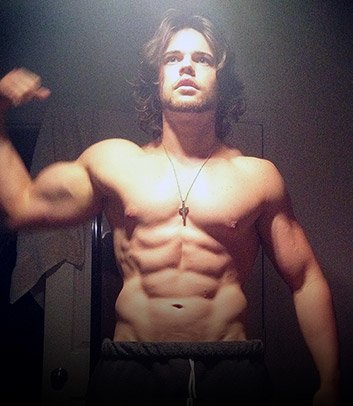 I was so upset at myself and remember thinking, "This is out of control." Instead of giving in, I squeezed into the slightly-stretched-out, too-small size from the year before.

Was that a big enough wake-up call to alter your diet and habits?

It was, but the next week I received more bad news. I had to go to the doctor's for a physical so that I could play football, and after a few tests, I was told they didn't even want me to leave the office. My blood pressure was so high that it was comparable to that of a 60-year-old man. They tried to push medication on me, but I refused and got out of there. That's when I really decided to take action.

How did you gain a foothold in fitness?

I decided that failure wasn't an option; I wasn't going to be a quitter. I had my mind set on what I wanted and where I was headed. Bodybuilding.com was my first step.

I took everything I learned on Bodybuilding.com, went to the gym, and just killed it. I'd choose the body part I wanted to target, go to the exercise tab, and make up a routine. Each week, I would try to increase the weight I used.

By the end of sophomore year, my two main goals were to deadlift 405 and hit 315 on bench. I met my deadlift goal but didn't get my bench until junior year—but I kept at it, which was the important part.

What motivational force in your life kept you going?

My father was a colonel in the Air Force, and through him I observed the kind of determination and hard work it takes to really get something you want. I saw that he made sacrifices to get where he wanted, and I realized I was going to have to do the same. His drive helped me get started and not give up on what I envisioned I'd one day look and feel like. I imagined resembling an ancient gladiator. 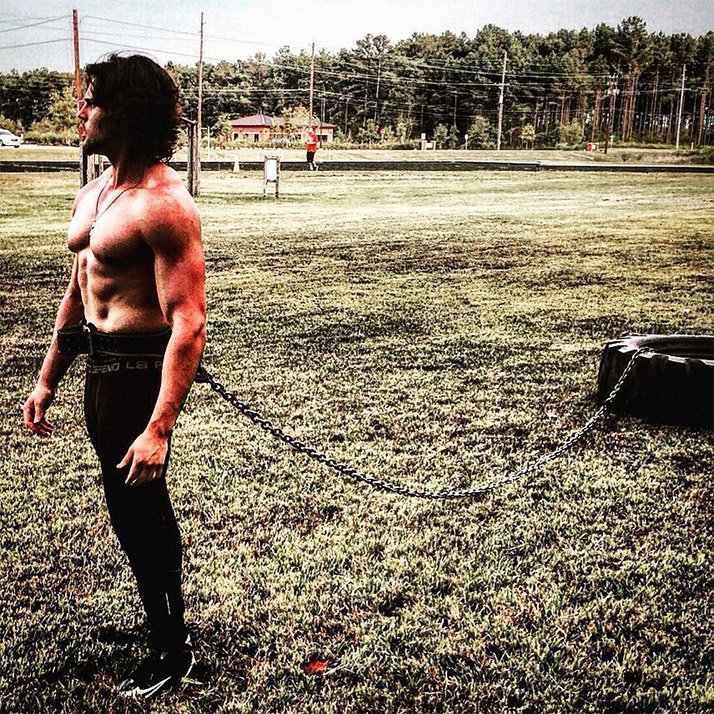 [My father's] drive helped me get started and not give up on what I envisioned I'd one day look and feel like. I imagined resembling an ancient gladiator.

The best advice I received was from my stepfather who said, "You either do it or you don't. It's a pretty simple concept." He was right—it was simple and clear cut. Initially, the weight wasn't my biggest issue; my attitude was. I had a problem controlling my attitude, which would generally end up on the negative side of things.

Part of my process was learning how to take my attitude and use it to reach my goals in the gym to get in a more intense, productive workout. Ultimately, the gym not only solved my health issues, it helped in other areas of my life, mainly in my temperament.

How did your family support you along the way?

My brother started lifting with me, but he was always the skinny one, so we were at opposite poles. But he was an inspirational lifting partner, and we'd organize our schedules so that we'd have time to go to the gym together. We'd push each other to reach our respective goals. He wanted to get bigger and I wanted to lose weight, so we agreed to meet in the middle.

When did you start seeing changes?

Progress was a bit slow at first because I didn't really have the diet nailed down. I just didn't realize how important that aspect was. I also didn't do any cardio at the start. With lifting, I got pretty big, but I was still holding a lot of extra weight.

It wasn't until I put on the gloves and started boxing that I really started to shed the extra pounds. In about eight months I dropped from 237 pounds to 205 pounds just from lifting. A year and a half into incorporating cardio, I hit my lowest weight of 178 pounds.

How did you get introduced to boxing?

This was one place where work ethic payed off. I would walk by the boxing room on my way into the gym, and the trainer, Coach Gregory Leschishin, would see me. He saw my work ethic in lifting weights and just approached me one day, asking if I'd like to try a boxing workout.

During my first class, Coach Leschishin realized I had a temper, and talked to me about self-control and training for a goal. He reminded me that this wasn't street fighting, but once he knew I was serious, he took me on as a client. He taught me the importance of cardiovascular endurance as well as strength training to reach my goals. And boxing was also a fun way to work on my cardiovascular endurance while taking out my frustrations.

What pushed you to change your nutrition?

I really started with the nutrition aspect about a year and a half ago, when I got really serious and learned about macros from a guy that competed at the gym. I'd see him eat things that I had labeled "bad"—like post-workout sour straws—and be completely mind-boggled. That's when I started researching flexible dieting and "if it fits your macros," (IIFYM) and realized that you can live a balanced life and eat right. Before that, I thought it was all about restriction.

What was the hardest part about transitioning to this diet? 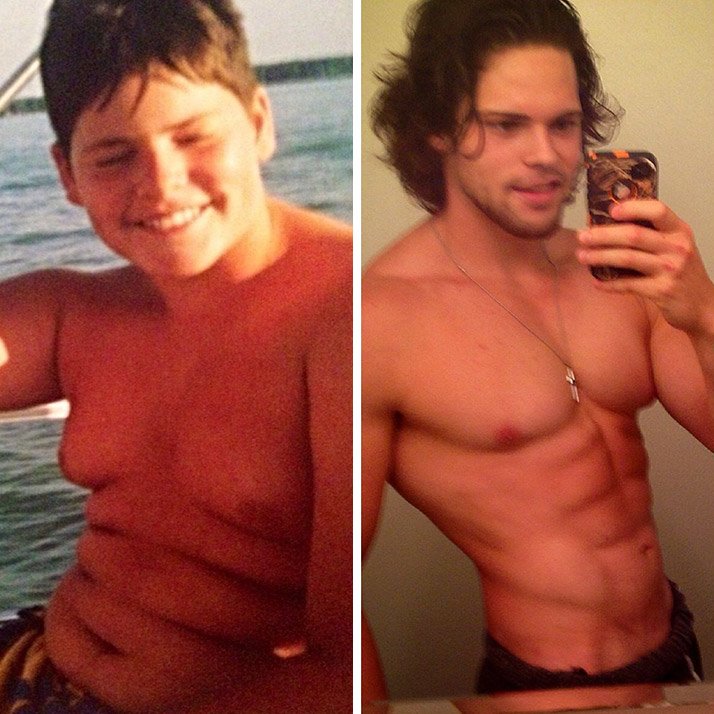 Living a fit life challenges you in many ways, and not all of it is physical.

The hardest part was definitely coming home, being hungry, and seeing all the desserts my mother had just baked sitting out there and smiling at me—especially her coffee cake. That's where mental strength played a role. Living a fit life challenges you in many ways, and not all of it is physical.

How do you deal with those challenges now?

I'm currently a cook at a barbeque restaurant where we make baked apples, sweet potato casserole, sweet and spicy ribs—all that type of stuff. I allow myself to indulge once a week, but usually have to have someone else try the food and tell me if it's good or not.

In my opinion, balance is key. It's all about the tradeoffs. Now I eat baked instead of fried food, and I save weekday cravings for weekend chat meals.

I'd love to get on stage and compete in men's physique. I'd just like to get there and be able to say I did it, because when I started, I never dreamed I'd get far. I still remember the first day I saw a little bit of an ab line. I was bending over to get a drink of water, looked in the mirror, and was like, "Holy Toledo!" I just wanted to go home and stare at it in the mirror. Competing would just be taking that to the nth degree.

What advice would you give to someone who is just starting out and intimidated by the gym?

When I first started lifting, I was the big kid lifting little weights. My form wasn't perfect, but I worked on it and stuck with weight I knew I could handle. I didn't worry about what anyone else thought. My advice to others would be to go in there and just focus on yourself. Go in there like the gym's empty, and work on bettering yourself. No one else around matters.

How is your life different today?

Now it's just a lifestyle that I love to live. I enjoy training. And, of course, there are other perks that come with looking good. More self-confidence is probably the biggest one. That, and I have no more farmer's tan—just a full back sunburn.