"To show our gratitude and acknowledge the tremendous sacrifice military personnel go through in service to the country, it is our honor to provide free tickets to members of the Armed Forces. Since 2001, over 4000 military personnel have attended the Olympia events as our special guest and we look forward to meeting and thanking service members for all they do this year," commented IFBB Founder & Honorary Life President, Ben Weider. 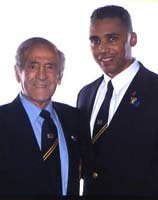 Upon verification of their military ID, active duty personnel will be provided complimentary tickets for themselves and one guest. Signs indicating where to pick up the tickets will be located near the ticket center at the Orleans Hotel. There is a limit of 200 tickets for the following events:

To reserve tickets, you must e-mail Rob Wilkins at Robifbb@yahoo.com to have your name added to the authorization list. This offer expires 21 September 2007.

For a schedule of events and the most current information on Olympia Weekend 2006, visit www.mrolympia.com

Military personnel, if you have questions, please contact Rob Wilkins at Robifbb@yahoo.com