Rob Wilkins, from Linden, N.J., has served as a Special Assistant for the International Federation of Bodybuilders (IFBB) since 1994.

In this capacity, he writes articles related to the IFBB for IFBB Muscle & Fitness, FLEX magazine, and other international Weider Publications. With the support of Joe and Ben Weider and AMI, he has coordinated the donation of Olympia Weekend tickets to over 4500 military personnel since 2000. In 2000, Wilkins was recognized by the IFBB for his outstanding service, dedication to bodybuilding, and work with "at-risk" children by receiving the IFBB Gold Medal. 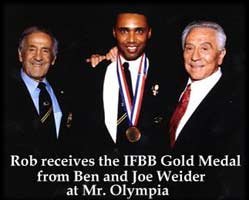 In 2005, Wilkins served as a member of the Joint Task Force-Armed Forces Inaugural Committee for the 55th Presidential Inauguration and was selected "Who's Who in America, 2006."

Wilkins has served in the United States Air Force for 21 years and is a Master Sergeant stationed at the Pentagon, Washington, DC. He also acts as the liaison between the IFBB and the U.S. Armed Forces.