An Interview With The Remarkable Simon Robinson!

Simon Robinson was involved in a horrific accident that put him in a coma for 12 days. Now, Simon is back on the bodybuilding stage and recently brought down the house displaying an incredible physique as a guest poser at the 2003 Mr. Olympia.

Perhaps one of the brightest moments and biggest surprises at this years Mr. Olympia was a standing ovation from over 6,000 fans for Simon Robinson. Born in Mansfield, England, 37 year-old Robinson was an active child who excelled at playing football (soccer). Blessed with exceptional athletic ability, he tried out for several professional football clubs. Unfortunately, he developed a medical condition which limited his eyesight and had to give up this pursuit.

However, he quickly moved on and guided by his older brother, he turned to Tai kwon do. Gifted with speed and coordination, he immediately responded to martial arts training and by 16, Simon was the British junior champion-a title he held for four consecutive years.

While fighting older opponents, he realized that he had to improve his strength and went to a bodybuilding gym where he soon became hooked. At 20, he entered his first local bodybuilding competition. Influenced by his favorite bodybuilders John Brown and Bertil Fox, he went on to win Mr. Britain, Mr. Europe and Mr. World.

Simon competed in over 20 local and international bodybuilding contests, remarkably never placing out of the top two. He developed a reputation as one of the best bodybuilders in the United Kingdom and Europe. Based on his unlimited potential, it seemed likely that he would follow in the foot steps of fellow country men Albert Beckles, Johnny Fuller, and Dorian Yates attaining IFBB Pro status.

Regrettably, Simon was involved in a horrific accident that put him in a coma for 12 days and he also lost a limb. With the love and support of family and friends, he preserved through a number of surgeries and years of physical therapy. Now, Simon is back on the bodybuilding stage and recently brought down the house displaying an incredible physique as a guest poser at the 2003 Mr. Olympia.

The following interview was conducted a few weeks after his inspiring Olympia appearance.

Rob: Please describe the circumstances which led to your accident?

Simon: To be honest I don't remember much about the accident. What I do remember is I had planned to visit Kerry (Kayes) in Manchester which is about 100 miles from my home.

We figured out that my mother received a phone call from the police which confused her so she immediately phoned my older brother Dennis who in turn phoned Kerry. This was about 7:00 PM-- three hours after the accident. After a number of phone calls, Kerry and my friend, Scott Gledhill, apparently found me in the Oldham Royal Infirmary after being transferred from Tameside General. Finding out I was in a terrible accident, they phoned Dennis and he and my wife Louise rushed to the hospital.

Later, I found out that a wagon dumped oil on a country road for over 20 miles and there were about 10 accidents that night including, mine.

For nearly two weeks I was in a coma suffering from a fractured skull, broken jaw, two collapsed lungs, chipped vertebrae, many cuts and bruises and I had a tracheotomy (a tube in my windpipe to help me breath). As I was coming out of the coma, hospital officials phoned Kerry and Scott as they thought it would be good for me to have familiar faces around me.

The first thing I remember when I regained consciousness was that my face hurt and I couldn't speak. Kerry said, "Simon you have been in an accident," and I thought I was disfigured. Kerry asked the nurse for a mirror and told me my jaw was broken and I had a tube in my throat and could not speak. After looking in the mirror I realized that I was still ugly, but as I was used to this, it was OK (smile).

I then pulled on my leg that had been broken in 10 places and it was in traction so I had limited movement. When I pulled on my other leg, I could see my stump and at that point Kerry told me I had lost a leg. My wife and children were outside and I had to get myself together to see them. My family and friends were relieved that I was alive. They supported me from the beginning of this ordeal and I was just getting used to the reality that my life would be different.

Rob: Recovering from such a horrible accident, you must have received a tremendous amount of support and love from your family and friends.

Simon: I received tremendous support not only from my wife and friends but from the entire bodybuilding community and six years later, we all just accept what happened and get on with it.

Rob: What did it feel like the first time you returned to the gym after the accident?

Simon: I did a bit of rehab in the hospital and I was fortunate their gym was decent but the first time I went to a bodybuilding gym was Betta Bodies, Kerry's gym, in Denton. It's on the 3rd floor of an old hat factory and my friend Scott Gledhill carried me up the stairs. Entering the gym didn't feel strange and in fact I felt at home and then knew that I could build my body back up.

Rob: Which circumstances led to your guest posing at this year's Mr. Olympia?

Simon: The first British Grand Prix in Manchester was about two years after my accident and I went in a wheelchair. Dorian (Yates) and Kerry introduced me to Ronnie Coleman, Chris Cormier, Flex Wheeler and a lot of the other IFBB Pros who were respectful and made me feel good.

I attended the second Grand Prix on crutches and some of the Pro competitors remembered me and commented on my physical improvement which again provided a real boost to my motivation.

The third Grand Prix, I walked in with my prosthesis and Kerry asked me to guest pose at the fourth Grand Prix--this provided me with a goal.

I felt a bit nervous about guest posing at the Grand Prix but as I made my way on stage I received a fantastic reception and could not believe it when Dexter Jackson, Chris Cormier, Dennis James and Ernie Taylor came out and posed-down with me.

After the show Wayne DeMilia asked me would I guest pose at the Olympia which I obviously accepted. I would like to make it known for the record my appreciation to Wayne for providing me with such a great opportunity.

Rob: How did you feel after receiving a standing ovation from over 6,000 fans and receiving the Mr. Olympia participation medal from Joe Weider? 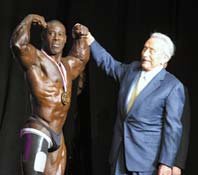 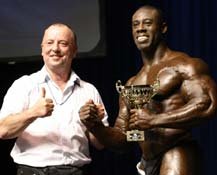 Simon: Think about it. Anybody who seriously lifts weights looks forward to the Olympia results every year and to be able to step onstage as a bodybuilder at the Mr. Olympia contest and meet the leaders of our sport is unbelievable. Also, to be treated with the respect that I was given during and after the show is just mind blowing - I am still pinching myself.

Rob: After your Mr. Olympia posing routine, you thanked Kerry for all he did for you. What role has Kerry played in assisting you move on with your life?

Simon: I, as well as most of the UK bodybuilding community knew, Kerry before my accident. Because of Kerry's reputation in the sport, he was able to open a lot of doors for me and thanks to his efforts, I now feel that I have a new career in the sport as a guest poser and inspiring others that achievement can be attained even after a life changing accident.

Rob: Did you have a chance to meet and exchange words with Arnold?

Simon: I was backstage when Arnold arrived with all his security. It was like watching a movie and when I came offstage, Arnold took a photograph with me which was nice of him.

Rob: Please describe the feeling you get from training?

Simon: I enjoy training, period. I am fortunate that I can still workout and that I have been able to build my physique back up again since the accident.

Rob: What is your favorite food, type of music and movie?

Simon: My favorite food since my visit to Las Vegas has to be cornbread! My favorite music is rap music but I also listen to all types. My favorite movie is The Matrix.

Rob: Living in the UK, what is your impression of the American bodybuilding scene?

Simon: My only experience in the bodybuilding scene was from the UK and we are a very tight knit community. Before my accident I would go to various shows all over the country and can honestly say we (bodybuilders) do stick together. After my accident, people have been the same--I guess what I am trying to say is I didn't need to be involved in a traffic accident for the UK bodybuilders to treat me special; we have always treated each other with respect and that continues to this day.

I don't know much about the grass roots of American bodybuilding. The only knowledge I had came from reading FLEX magazine but you guys are the same as us. I would like to add how special my family and I were treated during our recent trip to America to attend the Olympia and I sincerely thank all of you for this fantastic experience.

Rob: With all you have already accomplished, what are your goals for the future?

Simon: I would like to continue making guest posing appearances. I have always set realistic goals for myself. Even going to the British Grand Prixs as a spectator, I wanted to be in better shape every year. I have now stood and guest posed on the Mr. Olympia stage, met Joe and Ben Weider and Arnold Schwarzenegger.

Rob: Thank you for your time and being a tremendous source of inspiration and motivation to bodybuilders worldwide.

Simon is a wonderful example of the positive benefits of bodybuilding and his optimistic attitude has gained him an extensive fan base to include six time Mr. Olympia Dorian Yates who said, "I believe and Joe Weider has always said that bodybuilding is as much about your mind as it is your body, and Simon is living proof of this. I have known Simon for about 10 years and we were all devastated when Simon had his accident, but Simon showed his true character and came back to build a physique worthy of standing on a Mr. Olympia stage. At the Mandalay Bay this year it not only was a great day for Simon and his family but an equally great day for bodybuilding."

If you plan to attend the 2004 Arnold Classic, be sure to stop by the Dorian Yates Approved booth where Simon will be manning the booth along with Dorian and Kerry. To contact Simon for guest appearances and seminars please log on to www.cnpltd.com or contact Kerry Kayes at phone number 44-161-320-8145, fax 44-161-320-1212 or by e-mail at info@cnpltd.com.

Rob Wilkins, originally from Linden, N.J., is a Master Sergeant in the US Air Force stationed at the Pentagon, Washington, DC. Rob is also a Special Assistant for the International Federation of Bodybuilders (IFBB) and a recipient of the IFBB Gold Medal. To contact Wilkins e-mail him at Robifbb@yahoo.com.

All photos thanks to Alex Mac of The Beef magazine.