Welcome back behind the curtain, where we transform the lab into the gym and turn science into results. I'm here to simplify the complex and update you on the latest, greatest, most incredible studies on supplements, training and nutrition being conducted today.

At the end of each study summary, I'll also hit you with a quick, effective, practical way to turn smarty-pants science into real-world results.

Can an Apple per Day Keep Muscle Atrophy Away?

"An apple a day keeps the doctor away," the saying goes, but can it also keep away muscle loss?

In this study, researchers discovered that a natural compound from apples possessed the opposite signature to that which is associated with muscle-atrophy-inducing mRNA. Put simply, this means that apples may contain a compound that helps protect your muscles from breaking down during periods of disuse or damage.

The compound is called ursolic acid and is present in the wax-like coating of apples, pears, cranberries, prunes and other fruits; it's also found in high concentration in seaweed, Greek sage (Salvia triloba), oleander (Nerium oleander), rosemary (Rosmarinus officinalis) and periwinkle (Vinca minor).

When up to 0.27% of a mouse's daily energy intake was provided in the form of ursolic acid for five weeks, the researchers observed increases in IGF-1 signaling, muscle mass, and strength.

If ursolic acid does indeed prevent atrophy and promote muscle hypertrophy (growth), it's possible that Adam and Eve were just trying to put on more mass!

The Bottom Line:
Fuji and Smith variety apples were found to contain approximately 50 mg of ursolic acid per medium-sized apple.

Based upon the mouse data, a human would need to consume about 7.5 mg of ursolic acid per pound of bodyweight every day. For a 180-pound male, this equates to 27 Fuji apples daily. Not exactly practical.

Practical Application:
Eat a Fuji or Smith apple with your pre-workout snack to try and harness some of ursolic acid's many benefits! Even if the benefit is minor, the apple still provides training fuel. (Note that Smith and Granny Smith apples are not the same. Look specifically for Smith.) 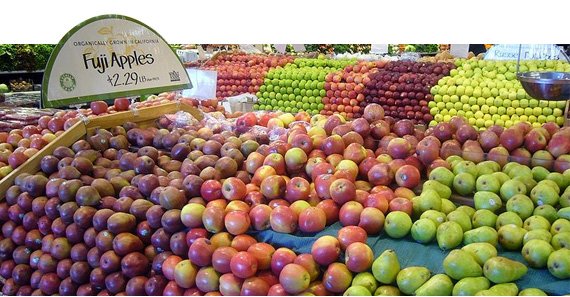 If you adhere to the Food Guide Pyramid or follow mainstream dietary, you know it's sacrilege to recommend that people consume more than 15% of their daily calories as protein. However, as more data supports higher-protein diets and their beneficial effects on everything from body composition and blood glucose control to support for persons with ADHD, sacrilege may become sacrosanct.

Consider a study that placed 90 overweight and obese adult women on either a low-dairy diet following the RDA for protein (15% of total calories as protein, and less than 2% of total calories from dairy products, respectively), an RDA protein level and moderate-dairy diet (7.5% of calories from dairy), or a high-protein (30%) and high-dairy diet (15%), in combination with daily exercise for 16 weeks. The results clearly support a higher protein and dairy diet for significant improvements in body composition.

Specifically, the high-protein and high-dairy diet significantly decreased fat mass and increased lean body mass better than the other groups.

Notably, only the high-protein and high-dairy group realized an increase in lean body mass, whereas the moderate-dairy and low-protein/low-dairy groups actually had no change or a significant reduction in lean mass.

Practical Application:
If you're beginning a calorie-restricted exercise and diet program, consume 6-7 servings of low-fat dairy per day, and select your foods so that 30% of your total daily calories come from protein.

Vitamin A May Boost Fat Loss

Most of us have seen enough TV advertorials to know that cortisol insensitivity is somehow tied to fat gain. Integral to the cortisol and body fat relationship is the enzyme 11 ? -HSD. The Type 1 isoform (11 ? -HSD1) of this enzyme is responsible for converting inactive cortisone to active cortisol, whereas the Type 2 isoform (11 ? -HSD2) inactivates cortisol.

Interestingly, the research to date can be generalized as showing that you can decrease body fat and improve metabolic function by either reducing the expression of the Type 1 isoform, or increasing that of Type 2, which either reduces the production of cortisol or increases the rate of its inactivation.

In a recent study involving obese and lean male rats that were provided Vitamin A for 20 weeks, Vitamin A was shown to significantly decrease body mass, visceral fat and 11 ? -HSD1 activity in both visceral and liver tissue of the obese rats.

The fat loss and 11?-HSD1 results didn't occur in lean rats, which probably supports the theory that lean individuals don't lack the insensitivity to signaling that's characteristic of the obese and overweight.

While Vitamin A appears help fat slim their bulging waistlines, it didn't do anything to help them pick up "Minnie mice."

Practical Application:
If you want to try harnessing Vitamin A for fat loss, we recommend supplementing with a mixture of Vitamin A and beta-carotene, the natural form of Vitamin A.

Despite the message of certain ads, evidence for calcium as a standalone fat burner is pretty slim.

Though all groups achieved significant reductions in bodyweight, waist circumference and waist-to-hip ratio changes, the greatest changes were observed in those that consumed three servings of dairy milk per day.

The dairy milk group lost more bodyweight than the other groups, specifically: 12.2% over the supplemented calcium group, 21.9% over the soy milk group, and a whopping 35.2% more than the calcium-containing diet group!

The Bottom Line:
Skim milk is slim milk! While this study isn't conclusive, it does seem to support the growing body of evidence that bioactive components present within dairy milk make it a strong candidate for supporting body composition changes, which doesn't appear to be a factor solely attributable to total calcium or protein intake.

It was once asked of a wise old owl, "How many licks does it take to get to the center of a Tootsie Pop?" Instead of preaching patience, persistence, and sacrifice, the owl suggested that some things aren't worth waiting for.

Though YouTube has provided an answer to the Tootsie Pop question, my former colleagues at the University of Oklahoma have finally quantified just how quickly a newbie may expect to see results in the gym.

However, analogous to "pump and pose," the researchers postulated that this immediate response within the first week was most likely the result of edema (the technical term for getting swole).

Practical Application:
Start training! If you've already been training, a radical change in your exercise program could elicit "newb" gains. These subjects progressed because they were untrained in this endeavor, so it is likely that significant training changes in your program could cause an over-loading response.

This could be said about almost anything, not just muscular development. Progressively make your body and mind work harder than they're used to in order to achieve optimal gains. Switch it up! 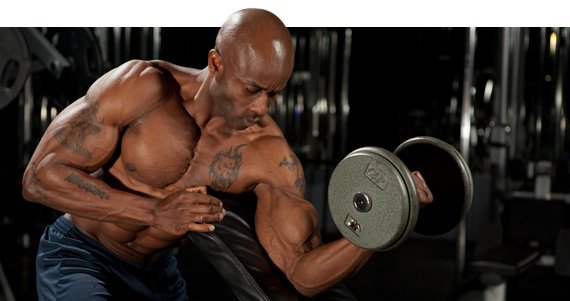 Wakahara T. et al. Association between regional differences in muscle activation in one session of resistance exercise and in muscle hypertrophy after resistance training.
Eur J Appl Physiol. 2011 Aug 21. [Epub ahead of print]

The debate over spot reduction has raged for years, but only occasionally is there a discussion over spot ... bulking.

When cross-sectional MRIs were taken of the triceps brachii immediately prior to and after an upper-arm resistance-training program, researchers concluded that the middle and proximal (closest to the shoulder) areas of the muscle were both the most activated during the first exercise session and the areas most hypertrophied after 12 weeks of three times weekly workouts.

The distal (closest to the elbow) area was both the least activated and hypertrophied.

The Bottom Line:
Modifying joint angles and the position of the load relative to the fulcrum point (axis of rotation) can stimulate motor recruitment in different patterns.

Practical Application:
Over time, you can increase muscle mass in specific areas of a muscle to bring up lagging body parts.