What Is The MECCA Of Bodybuilding?

So, you say you want to be a bodybuilder huh? Have you been to the Mecca yet? For those who have, raise your hand, and raise your hand if you have been to Gold's or World's in Venice, California.

So, you say you want to be a bodybuilder huh? Have you been to the Mecca yet? For those who have, raise your hand, and raise your hand if you have been to Gold's or World's in Venice, California. 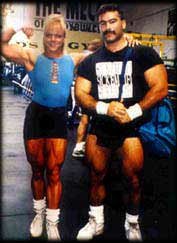 If you ever wanted or dreamed to live the bodybuilding lifestyle, the Mecca is the place to be. But does being there automatically make your training more effective? Well, I'll say this; your training will take on new forms of intensity and for some, you will be a little - humbled to say the least. Yes humbled! When you walk through those doors the pros are stacked thick and the average arm is around 22 inches. Girls? Wow, the place is full of female bodybuilders, fitness competitors and did I mention all the Movie stars. It can be a little overwhelming. If you don't have it together mentally and physically you can get eaten-up in the atmosphere. 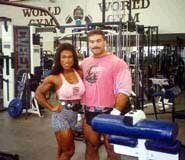 So, if you have thoughts about turning pro, or if you're just bored in the town you're stuck in, let's take a look at a summer trip were it all starts; the Mecca.

Plain and simple, California is great, climate-wise. It hardly ever rains, there's always sun around to get a nice tan, and the beach isn't far away - Hell it's right across the road. If you live in a colder place, you're dressed up more for the better part of the year, perhaps making it psychologically easier not to stay in shape. In CA, you're wearing shorts and T-shirt almost year-round. And what about the beach volley, rollerblading, and a variety of other outdoor activities to chose from as well? Not to mention visiting the non-bodybuilding sites while in California. This is a must. You can't miss going to the Zoo's. Get in your rental car and drive a short distance to the San Diego Zoon and the LA Zoo isn't too shabby either. If you really put in the time for a visit you have to do the Napa Valley wine tours, even if you do not drink wine, you've got to go. And let's not forget the picturesque view you'll witness at the Yosemite National Forest. 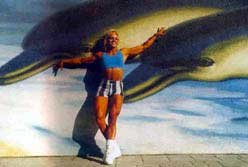 One of the many painted walls on the boardwalk, Venice Beach.

Of course it's more inspiring to be around other serious people, and chances are some of the positive state of mind will rub off. Obviously, there are free weights and machines at any given gym. But, training with those same bars, dumbbells, and machines at either Gold's or World's gyms, the muscles seem to grow faster and hold a pump longer. I'm not kidding. Once a competitive female bodybuilder friend of mine who's from England, and myself caught a workout a Gold's, Venice one evening and we pushed each other so hard that we got sick training back and arms. Sick training back and arms! Who was there training that same late night, but none other then Charles Glass, Diana Dennis, and a multitude of very big guys.

When visiting the Mecca, stay at the Marina Pacific Hotel, this is where all the stars of the bodybuilding world hang out. The hotel sits right on Venice Beach minutes walking distance to the beach and to all the gyms. Upon waking from your first night at the hotel you must have breakfast at the famous Firehouse restaurant, where the Buffed and Famous go to devour their bear-sized portions of protein and complex carbs or for you layman a healthy serving of scrambled eggs and a large stack of pancakes. Ooooh, so good. 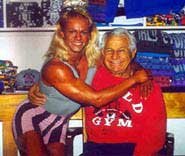 A nice time to visit the Mecca is around the 4th of July. Why? Well, because this is the day of the traditional Muscle Beach Open at the world famous cradle of modern bodybuilding, Muscle Beach, Venice. Usually a top pro treats the crowd to a professional posing performance. Schmoozing with the pros and top amateurs is what the Mecca is all about. The real fun is going around the gyms and training alongside the likes of Flex Wheeler, or the legendary huge Victor Richards. 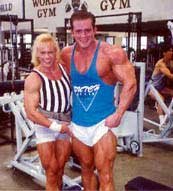 Clowning around at World's Gym, Venice

First off, very few make it to the top. Consider that bodybuilders in Venice are a dime a dozen. If you also have dreams of the silver screen and modeling, get a reality check. In order to do any of the above you have to be crazy in more ways than one, blessed beyond belief, and lucky to survive the high demand to be a top-level bodybuilder. Don't get me wrong. You can do it. However, you need to be strong willed and dedicated. A little dash of genetics helps. But, remember to have something to vent the steam, because the bodybuilding lifestyle has its frustrations just like other goals in life.

The successful guys who packed their bags and headed for fame and stardom can be counted on your fingers. Personally, I would rather stay an amateur, especially as a female bodybuilder. Now being one of the boys is different. If you understand that you have to be a HUGE FREAK to be tops in the bodybuilding industry, and you have what it takes, genetics, and lots and lots of money then you might have a chance. I have put myself through some serious sacrifices to try and obtain that IFBB Pro card, to the point of thinking that I should be given one solely because I was a bodybuilder I was going to be handed one and I was good enough, but that's not the way it goes in bodybuilding.

Turning pro is such a long shot. It all boils down to why you workout in the first place. If you're only in it for fame and money, you're grasping for the wrong stars. If you're more interested in living a good, healthy life with balance between family, career, and training, odds of success are endlessly better. And you don't even have to move to L.A. Remember, Dorian Yates built his 6-time Mr. Olympia physique in a basement gym in Birmingham, England, beating the crap out of all the fancy Venice-based guys. It's the spirit, not always the location. But, take it from me, if you want to see what this sport has to offer visit the Mecca. Just prepare yourself to be wowed by all the bodies. So, for your new years resolution save for that summer vacation to - The Mecca!

Been competing for over 12 years as a NPC National level competitor, with most recent win 98' NPC Southern States Heavyweight & Overall, & 98' IFBB N