Many factors contribute to an individual's ability to exhibit external force. Learn all about them!

Joint angle is vital to the ability to produce force due to the dynamic length of the lever arms involved in performing the movement. As the joint angle changes the ability to produce external force concurrently differs. The length of the moment arm formed at the shortest perpendicular distance between the axis of the primary joint of action and the line of action of the external load directly influences external force production (Baechle, 1994, chap. 3; Siff, 2000, chap.1).

Thus, torque generated by a force of a given magnitude is always proportional to the length of this moment arm (Hall, 1995, chap. 13). As the limb travels through the range of motion, the moment arms continually change resulting in differing mechanical advantages. This in conjunction with the changes of muscle length related to the joint angle has a great impact on strength production (Zatsiorsky, 1995, chap. 2).

A muscle's ability to produce force is partially dependent on its length at the moment of measurement (Zatsiorsky, 1995, chap. 2). As a joint progresses through its ranges of motion, the muscles lengthen or shorten accordingly. When the muscle is in a lengthened state the area of overlapping actin and myosin filaments is changed.

This allows for a greater number of cross-bridge attachments that can be established and a greater contribution of elastic forces, especially from parallel elastic components. Due to the intimacy between these two factors, there is a complex relationship between muscle length and force production.

Pennated muscle can exert its greatest force when it is stretched to 1 1/2 to 1 1/3 of its original length, whereas parallel-fibered muscle optimal length is just longer than resting length (Hall, 1995, chap.6). It is during this range that the mechanical and visoelastic properties function most harmoniously.

Force production is relative to the velocity of motion. There is an inverse relationship between maximal force (Fm) and maximal velocity (Vm). Motion velocity decreases as external resistance increases (Zatsiorsky, 1995, chap.2). Due to the contractile properties of skeletal muscle, it is physiologically impossible to produce maximal force at high velocities.

This relationship is illustrated in the force-velocity curve. Some effects of strength exercises are dependent on the velocity of execution. Heavy loads expressed with slow (yet maximal) velocity will mainly increase the ability to produce maximal force in that trained range.

Furthermore, if exercises are executed with low loads and high-velocities, abilities primarily improve in this range of the curve (Zatsiorsky, 1995, chap.6). Thus, training must represent the same properties as actual sport.

The mechanical composition of the active joints greatly influences the ability to produce external force. The majority of the joint structures in the human body operate as third-class levers. In this situation, the muscle force and the load force act on the same side of the pivot point of the joint (Baechle, 1994, chap.3). 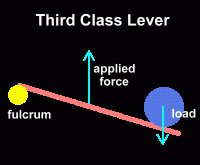 To create concentric motion, the muscle force must be greater than the load force. In most joints, the axis does not stay in a constant relationship with the muscle force. This changes the ratio of the effort arm and the load arm and thus the mechanical advantages experienced throughout the range of motion (Hall, 1995, chap.13). More force must be applied during certain ranges of motion to effectively translate an object.

Tendon insertion relationship with leverage can have an impact on strength. The more distal a tendon is inserted from the joint axis the greater the internal effort arm, which increases the potential for external force production. Conversely, as the insertion moves distally, any given shortening of the muscle will create less translation of the effort end of the lever.

**Distal: located away from the point of origin or attachment

The central nervous system is of great importance in the ability to produce force. It calls upon three methods for varying force production. These include: (a) recruitment, or the control of force production by the addition or subtraction of addition motor units; (b) rate coding, or changing the rate that the motor neuron fires; and (c) synchronization, the ability to coordinate the different motor neurons into a cohesive mechanism (Zatsiorsky, 1995, chap. 3).

Motor neurons determine the classification of fibers as slow-twitch or fast-twitch. This categorizes the fibers by their rate of contraction. Slow-twitch fibers are characterized by contraction times of 90-110 ms., which is considerably longer than the fast-twitch fibers that characteristically contract for only 40-84 ms. The recruitment of motor neurons is based on the size principle.

During voluntary contractions, the recruitment of fibers is controlled by the size of the motorneurons. Smaller motorneurons will have the lowest firing thresholds. Conversely, the larger the motorneuron the greater the stimulation must be before it is recruited. The recruitment order for muscle is relatively fixed during a given motion regardless of velocity of movement.

If a muscle is multifunctional and is elicited in two different motions, the motorneuron recruitment order may vary drastically (Zatsiorsky, 1995, chap. 3). Smaller muscles use recruitment as their main method of force production until approximately 50% of maximal tension has been achieved. From this point, rate coding begins to play a larger role.

For larger muscles, recruitment of additional motor units is the major mechanism for increased force development throughout approximately the first 80% of maximal contraction. Anything above this level is almost exclusively an effort of increased intensification of firing rate.

Fiber type can determine the force capabilities of individual fibers. Fast Glycolytic (FG) fibers are characterized as having the greatest ability to produce force. Furthermore, they are capable of higher firing rates than Fast Oxidative Glycolytic (FOG) and Slow Oxidative (SO) fibers.

FO fibers are the last of the three types to be recruited followed by FOG. This allows SO and FOG fibers to contribute to overall strength development, even though to a much lesser degree. Enlargement of these fibers through hypertrophy of the myofibrils is generally associated with increases in maximal force production.

Fiber arrangement within a muscle can influence the magnitude of external force production. Pennation of muscle fibers can be classified as longitudinal, quadrate or quadrilateral, triangular, fusiform, unipenniform, bipenniform and multipenniform. The pennation of a muscle can directly affect the internal line of pull of a muscle and determine the mechanical advantages produced.

This will have an influence on the ability to create external force. As with tendon insertion, pennation can influence the velocity potentials of muscles. Muscles with a less direct line of pull will have to shorten farther to create the same translation of a limb then will muscle with a straighter line of pull.

Progressive Sporting Systems offers you the unique opportunity to train under the guidance of experienced strength and speed coaches.