This article is divided into fours sections, one for each position on the field of play. This is because the strength training of goalkeepers, defenders, midfielders and attackers should and must differ from each other.

For some reason the physical training in soccer is somewhat a myth. There are many soccer coaches, who do not understand even the basics of strength training, and that can be seen in the results.

In addition to the harm they do to their own careers they also ruin some young talented players. Who knows how many future stars have been destroyed by incorrect strength training methods. As far as I am concerned, too many.

To illustrate my point, lets take an example, how many times have you seen this: teen-aged soccer players lie on the training field and do some incorrect sit-ups and push-ups. All the players do the same number of sit-ups and push-ups, no matter what their physical condition is.

This article is divided into fours sections, one for each position on the field of play. This is because the strength training of goalkeepers, defenders, midfielders and attackers should and must differ from each other.

There is one thing that keeps amazing me all the time: why soccer coaches make the goalkeepers run around the training field with the rest of the team. Actually, they did this in one Premiership club, too. The number one goalkeeper of the club in question was pissed off because of that and for a good reason too, I might add.

They are goalkeepers, they are no long-distance runners. Instead of wasting their energy on something useless, they should focus on adding lean muscle to their legs, arms and all around their bodies. To be a good goalkeeper one must have a good balance between strength and stamina. 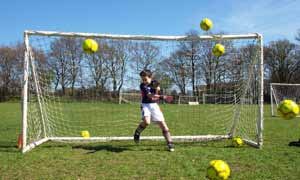 Goalkeepers should also concentrate on their running, but now I am not talking about 10,000 metre runs or even 100 metre sprints. In my opinion, they should concentrate on improving their speed on 5 metres and 10 metres.

Well, how many times do goalkeepers run across the field of play in one match? Not even once, but they do have to be aware all the time and be ready to take a few steps forwards, backwards and so on, in a very short time. After all, if we examine closer to all the best goalkeepers in the world, such as Casillas, Canizares and Buffon, they are all in perfect condition. They never show up in poor condition and nor do they lack strength and stamina.

One thing that goalkeepers should also focus on is their reflexes. Oddly enough, reflexes can be improved too. All it takes is proper methods in strength training and mental training.

This is why the defenders should strive for perfection. It is understandable that nobody is perfect, but the defender should at least be able to challenge the attacker`s strongest skills. Lets take defenders like Walter Samuel and Alessandro Nesta, they are really good at everything. They are never totally humiliated by the attacker. Well, at least that does not happen very often. 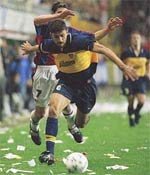 To be one of the best defenders is really difficult on the mental side too. There are many top attackers who have admitted that they never had the nerve to be a defender. Defenders and goalkeepers differ from midfielders and attackers, because they are allowed to make no mistakes.

Actually, only their mistakes will be remembered. This is something that must be remembered when the weight training routines are planned for defenders.

There are so many different kind of midfielders that this article can just scratch the surface. I mean, there is no way that we can compare the wizard of dribble Luis Figo to a terrier like Edgar Davids, or a great visionary like Zinedine Zidane to a hard-tackling defensive midfielder like Patrick Vieira. That is why midfielders and their skills should be examined either as defensive or attacking. Therefore their strength training methods should also be planned depending on their position on the field of play.

When defenders must strive for perfection, the attackers can concentrate on bettering a few skills that they find important. They do not have to be good at everything. Actually, it is better to be one of the best at something than mediocre at everything.

To illustrate my point, lets take a few good strikers, such as Ronaldo, Thierry Henry, Alan Shearer and Fernando Morientes. Ronaldo and Henry are physically so alike. They are speedy, agile and they have light movements.

Morientes and Shearer are good examples of target players - they are strong and their aerial power is incredible. They are strong by nature, but with proper strength training methods and rigid attitude they have added the muscles to their bodies, which is needed in order to be one of the best goal poachers in the world of soccer.

When it is true to say that the strength training of defenders, midfielders and attackers should differ from each other, it is also true that there are some elements in weight training that must be done similarly - no matter whether the player is defender, midfielder or attacker. Goalkeepers are an exception to this rule.

Perhaps the most important thing to remember is that in today`s soccer matches players run more than they used to in 60s, 70s and 80s. So, in addition to weight training, players must keep up good oxygen uptakes and healthy lifestyles.

Hans Hauiskaanto is a freelance journalist from Finland with wide range of experience in writing on sports. He possesses keen knowledge of the attributes of compelling stories, good writing, talent and creativity. His articles have appeared in various magazines, in addition he has gained experience in hosting shows too. Should you require further information Hans Hauiskaanto's e-mail address is Hans.Hauiskaanto@gmail.com.

Hans Hauiskaanto is a freelance journalist from Finland with wide range of experience in writing on sports.