The Rock and Mark have both focused on fitness through their lives. Their new movie tells the story of three bodybuilders who get in over their heads.

To get ready for starring roles in the upcoming blockbuster Pain & Gain, Mark Wahlberg and Dwayne "The Rock" Johnson had to prepare their bodies to flex the mass bodybuilders are famous for carrying. In this interview, they talk about their training for the movie and their personal lifting histories.

Wahlberg got his start in music, rapping his way through the 90s, but weightlifting stuck with him through his emerging fame. Johnson grew up admiring his father and uncles, who cut their teeth as professional wrestlers. As he followed in their bootprints, he grew into a Rock so strong, the whole world wanted to smell what he was cookin'.

Q
Dwayne, what was your training like for this film?

Rock: My routine for this film was training six times per week with George Farah. Many people who go on Bodybuilding.com know who my strength and conditioning coach is. I also have a training coach in Dave Ramsey.

This was a hell of a prep. For a movie like this, that revolves around the world of bodybuilding and the culture of bodybuilding—that we love, by the way, and that we grew up on—the prep was a good 8-10 weeks, six workouts per week, training twice per day. I did my cardio in the morning. 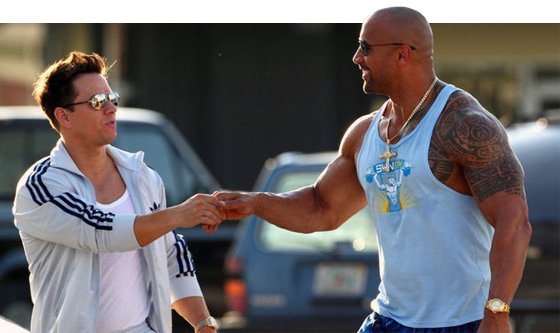 Mark: I invited Dwayne to do some Jazzercising with me on Tuesdays in South Beach, but he never showed up.

Rock: I passed on the Wednesday Jazzercise.

Mark: So I brought the Jazzercise to the outside of his trailer, and we started with a "5,6 ,7 ,8 and a 1,2,3..." He would never come out and join in! But, I know he was inside dancing because I could see the trailer shaking.

Rock: I was doing other things—by myself, which is... interesting.

Mark, what was your routine like to prepare for this film?

Mark: Once I signed on for doing the movie, I was committed to getting as big as possible. That just meant going back to doing what I used to when I was really young, lifting as heavy as possible and eating 10-12 meals a day. I drank 2-3 mass gainer shakes a day and my calorie intake was pretty damn high ... and my gas was horrible, to be honest with you.

How different do you think your career and possibly your life would have been had you not embraced the physical fitness part early on?

Mark: Oh, man. Between my physical fitness and my faith, I have so much discipline in my life. And I have such a positive outlook on life, the opportunities that I have, and the things I've been able to accomplish in my life.

It starts out when I'm up at 4 o'clock in the morning. I'm in the kitchen making breakfast. At 5 o'clock I'm in the gym. By 6:30 I've already had another shake. At 7:30 I'm eating a couple turkey burgers, dropping the kids off at school. By 9 o'clock I'm having another meal, and I've already been to church and worked out. I feel like there isn't anything I can't accomplish.

How about you, Dwayne?

Rock: Certainly not all that by 9 o'clock! But the training for me has become very defining; it has become part of my life, my lifestyle. It's defined me in many ways. When I was 14 years old, I started training and I thought to myself, "I want to be successful." And the way I know how to be successful, I think, [is from] the men I admire. Those men in my life were pro wrestlers; [they] were my uncles and my dad. Then they were also Arnold Schwarzenegger and Sylvester Stallone. 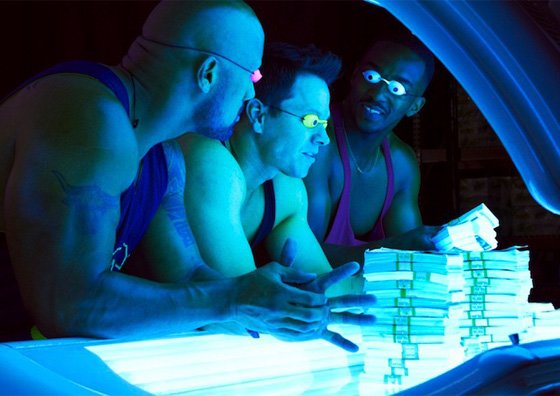 Mark, to Rock: Who were your favorite wrestlers when you were a kid?

Mark, to Rock: Snuka was your uncle?!

Rock: So these men were big men who always trained and got things done with their hands.

Mark: Wow, Superfly Snuka ... those were the great days of wrestling.

Rock: Those were the good days.

Mark: Damn skippy—with a little Irish thrown in there.