The following is an excerpt from the May 2007 issue of Muscle & Fitness:

It's snowing in St. Louis. Though dozens of hotels can be found within a stone's throw of the world-famous Gateway Arch, the streets are quiet, the sidewalks bare. The digital temperature readout on a nearby building reads a face-tightening 12 degrees (yes, Fahrenheit) at 9:15 in the morning.

But somewhere in the frigid, snaking bowels of dormant Busch Stadium, 27-year-old Cardinals slugger Albert Pujols is just getting warmed up - dialing himself in one swing, one rep at a time for the coming season.

See, for Albert, there really is no time for winter. He's got a ring to defend, pitchers to terrorize and accolades to win, February chill be damned. Last year, he hit .331 with 49 home runs (bringing his career total to 250) for the world champs, but all he sees is room for improvement.

While the rest of the league is simply getting ready for spring training, Albert is getting better and - here's the scary part - stronger. Then again, that's to be expected when you're pulling two-a-days at the gym, sometimes completing more than 36 sets worth of exercises in a single session.

As it turns out, the game's most-feared batsman is also pretty skilled with the iron. Though at times he seems more machine than man, Albert's power, speed and agility are born of sweat, sacrifice and the types of gym poundages that would make even the most accomplished lifter proud. For this ballplayer, the weight room is every bit as sacred as the batting cage, regardless of the season.

At 6-foot-3 and 240 pounds, Albert looks more like a football strong safety than a first baseman. Sporting a sleeveless T-shirt and shorts for his shoot with M&F, he speaks on his weight training as knowledgeably as he might on hitting. But like many ballplayers, he was initially reluctant to subscribe completely to a regular weight-training program, fearing that he might get too tight or that his swing might suffer.

"I grew up in the Dominican [Republic], but I never lifted weights there," he says. "I didn't do anything crazy until I started working with Chris Mihlfeld in 1998, when I was 18."

"He was around 205 pounds, long, lanky, but a little soft around the middle with some baby fat," says Mihlfeld, who coached Albert for a short time at Maple Woods Community College in Kansas City, Missouri. "He had good natural strength in his hands and forearms, but he didn't have any weight-training experience at all."

That changed in 1999 when Albert was signed in the free-agent draft and contacted Mihlfeld to help him get stronger for The Show.

"We took small steps," Mihlfeld says. "He wasn't very strong with the weights at first, but in the last three years, we've really started to go heavy. In the beginning, he was doing dumbbell bench presses with 35s and 40s. Now, he's throwing around 100s like cupcakes." 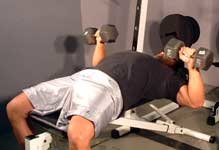 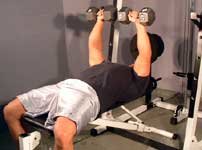 For the rest of our interview with Albert and a peek at his mind-blowing off-season workout, pick up the May issue of Muscle & Fitness, on newsstands April 2. And be sure to catch Albert and his teammates as they defend their World Series crown beginning on April 1 with their home opener with the New York Mets. (www.stlcardinals.com).