MTV chose Brooke Dragon to be Made into a bikini model, but Brooke did the work. Follow her from the gym to the stage and discover how a model is made!

Brooke Dragon may sound like a fairytale name, but this 19-year-old college student is real, down-to-earth, and motivated to help people change their lives. She's also the subject of an episode of MTV's Made, a show that helps people transform dreams into reality. Made challenges people to #dreambigger. Brooke Dragon accepted that challenge.

BROOKE DRAGON: Made for the Stage
Watch The Video - 8:36

Brooke comes from a healthy family, but she's been never been incredibly fit. She's struggled with low confidence, bad eating habits, and a rollercoaster body image. Until now, that is. Made has helped Brooke become a competitive bikini model, transforming her body and mind in the process.

As Brooke will attest, the confidence and mental strength prove more powerful than any physical transformation.

Brooke spent five grueling weeks under the tortuous gaze of her Made coach, IFBB Bikini Pro Tianna Ta. In the end, she competed for the first time, changed her body and life and, to her surprise, inspired her own mother to take the stage. 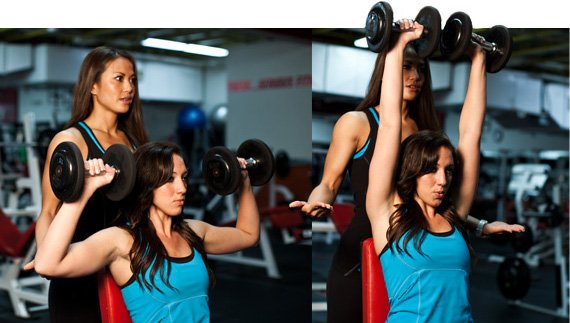 The Change Is Made 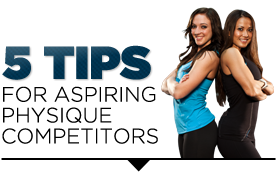 Brooke is studying to become a registered dietician, but bad eating habits weren't helping her body. When Tianna Ta first met her, Brooke had a chicken wing in her mouth, a plate of picked bones, and a slice of pizza locked and loaded. The night before her weigh-in, Brooke downed fried lobster, mac and cheese, a burger, fries, ice cream, and soda. Ta had her hands full.

To relate to future clients, Brooke wanted to experience the workouts recommended by training and nutrition professionals. She went on Made to show people her age the entire process—to prove that bikini bodies are not gifts, but products of hard work. "I've never challenged myself, physically, with my body, ever," Brooke says. "I decided to do something a little extreme."

She went in search of confidence and gained it though diet and exercise. She felt like she wasn't good enough, but through self-discovery, she learned that inside her was a proud, confident woman, waiting to take the stage. She abandoned her comfort zone to transform her physique.

"When you push yourself out of your comfort zone and you succeed in doing that, it's like you have no boundaries," Dragon says. "You want to come back to the gym and see how far you can push the envelope."

Brooke's father was a competitive bodybuilder and her mother runs a fitness studio. Despite the family influence, Brooke never took to the fitness lifestyle. "I would be the last person in my family to ever do this," she says. "I'm the girl who eats as much as she wants, whenever she wants, and says, 'Oh, I'll just work it off later.'" 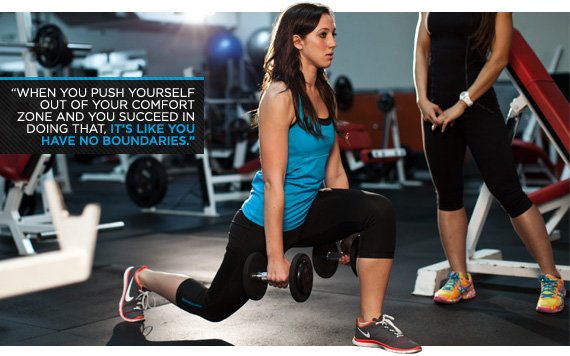 Later is now. Brooke is an adult, a college student, and she wants to be qualified in her field. That means putting aside chicken wings and replacing them with boneless, skinless chicken breasts. It meant looking at her position logically, in a mature manner. That's exactly what Brooke has done. 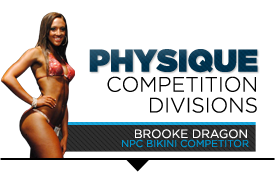 Bodybuilding: Female bodybuilders are graded much like their male counterparts. However, judges look for these women to maintain a feminine look.

Bikini: Bikini athletes must have a healthy physique; judges are not looking for striated muscularity or definition. They're graded for their symmetry, confidence, skin tone, and grace.

Fitness: These women demonstrate their strength, flexibility, and fitness in a choreographed routine. They'll also be judged in a side-by-side bikini round.

Women's Physique (new): These competitors are more muscular than figure athletes, but are not hard, defined, or dry like bodybuilders.

Olympia Weekend is the crowning achievement for bodybuilders and fitness competitors across the world. Brooke, who didn't know that bodybuilding is only one of many physique divisions, was enthralled by her first Olympia. She was shocked by the incredible pro bodies on display, but even more stunned by how kind and helpful the pros were.

"I ran into Nicole Nagrani. When you look at someone, you don't know their age, so I was figuring this girl was way older than me, but she is my age, in college, pre-med, doing crazy things in school—and she won the Olympia last year, by the way."

Nagrani's influence grounded Dragon. They had much in common, but Nicole was a world champion bikini competitor. She told Brooke to prioritize, fit the gym between classes, take prepped food to class, and make it as easy as possible.

"She was very relatable and that's what I like," Brooke says. "A lot of other people I got to talk to—Phil heath, Nicole Wilkins—they just wanted to help. They wanted to spread wellness to everyone. That's what I want to do, too! It was a very welcoming experience for me, and a huge eye-opener to the possibilities of fitness."

When it came time for her own competition, Brooke nailed it. She took third place in her division, but this wasn't about the finish—it was about what would happen afterward, when Tianna was gone and Brooke would be left to her own will. 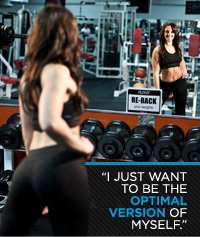 "I want to work out one hour per day, keep all my eating habits the same, and get my body to where I want it to be in my own time," Brooke says. "I just want to be the optimal version of myself."

Brooke even inspired her fit-minded mother to compete. It was something she considered for years, but her daughter's dream inspired her to finally step onto the stage.

For more on Brooke Dragon, visit her page on BodySpace: brookedragon.