Insulin & Supplements: What You Need To Know!

I've talked a bit about insulin in the past. I'm going to review my previous article previously published on Bodybuilding.com before delving into some new info.

I've talked a bit about insulin in the past. I'm going to review my previous article previously published on Bodybuilding.com before delving into some new info.

Insulin is THE most anabolic hormone in the body and its actions on glucose metabolism work primarily in three tissues:

Insulin's anabolic properties make it rather important when thinking about packing on muscle. However, too much insulin could cause you to resemble Professor Klump from The Nutty Professor. Here's why:

Insulin secretion occurs via the -cells in the pancreas with the consumption and digestion of food; particularly in response to a carbohydrate-rich meal. Amino acids can also increase insulin levels, although glucose (carbohydrate) has the greatest stimulatory effect on insulin. Basically, when you consume food, blood glucose rises and insulin is released to control blood glucose levels (not allowing them to go too high).

The best way to maintain healthy insulin levels throughout the day is by eating a wide variety of whole grains, lean proteins, healthy fats, fruits and vegetables. In fact, the only time you should deliberately increase insulin levels is after a workout.

With that being said, there are a number of dietary supplements that MAY enhance blood sugar control and, subsequently, insulin levels. This is by no means a recommendation to try any and all of these; you don't want the opposite effect to occur (low blood sugar, or hypoglycemia), which could happen with higher doses of these ingredients.

First on the list is alpha-lipoic acid (ALA). ALA occurs naturally in cells, is involved with carbohydrate metabolism, and important for the production of our body's energy source, ATP.

ALA is both water and fat soluble (unlike most other vitamins and minerals, which are either water or fat soluble). Because of this, it is a very potent antioxidant, able to regenerate other antioxidants such as vitamins C and E and glutathione, aiding in the prevention of oxidative damage.

The connection between oxidative stress and the onset of insulin resistance been primarily studied in cell cultures with convincing results. There have also been a few studies to demonstrate this same connection occurs in vivo (in the body) too.

One recent study made this connection in insulin-resistant obese rats. Another more recent study in humans with type II diabetes (those who produce insulin but are resistant to it) came to the same conclusion.

Don't think this lets you off if are not obese or without diabetes, since insulin resistance is most common in these populations. This just demonstrates that there may be a correlation between higher levels of oxidative stress and insulin not working efficiently. Therefore, antioxidant consumption via foods is best and supplementation may a good idea; ALA is a good start.

In addition, ALA has been shown to aid in glucose uptake in the muscle cell. ALA can positively affect insulin signaling and glucose transport via its direct stimulation on the GLUT-4 transporter, which is one of the 5 GLUT-transporters necessary for glucose uptake. Unlike the other transporters, GLUT-4 is regulated by insulin, which is most likely where ALA comes into play.

In plain English this basically says that ALA may allow our cells to more efficiently take up nutrients (both food nutrients and dietary supplements), which could enhance their effectiveness. Potentially, ALA would be beneficial in conjunction with your post-workout meal to enhance the speed at which the cells take up and store the nutrients you feed them allowing for increased recovery time, glycogen storage, and protein synthesis.

With the evidence outlined above, it seems probable that reducing oxidative damage with ALA, in addition to its potential to increase cellular uptake of nutrients, this product may be a good one to add to your arsenal.

Learn More About ALA...

Bitter melon (BM) is one of the more popular products used worldwide to lower serum insulin and normalize blood glucose levels. BM fruit and juice are regular components of the diet in other areas of the world; however, it's not too common in the US. There is not a great deal of published research on bitter melon in humans, but that which is out there is promising.

It appears that BM's effects on glucose metabolism stem primarily from the fact that BM contains an insulin-like polypeptide called polypeptide P, or plant-insulin.

Plant-insulin has been shown to have similar effects to bovine insulin, which, as we know, lowers blood glucose. However, some speculate that all the positive effects from BM supplementation are likely induced by more than one compound.

A recent study was published to ascertain if the use of BM is warranted. Researchers fed male and female rats either high or low-fat diets and various doses of freeze-dried bitter melon juice (7.5 or 15.0 g/kg) to determine BM's effects on glucose levels, insulin resistance, energy efficiency and adiposity. 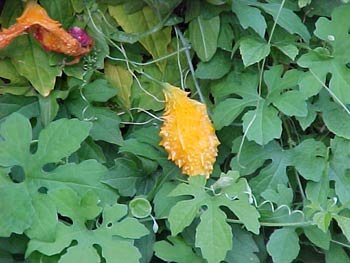 The results of this study demonstrated that BM reduced weight gain and body fat without affecting energy intake or fat absorption. In addition, the impaired glucose tolerance from the high fat diet was normalized from BM. Similarly, the BM supplemented groups lowered their serum insulin levels in a dose-dependent manner (the higher BM groups had non-significantly lower insulin levels). Hmmm, seems like an interesting product.

Again, let's go back to the intended discussion point of this article; assuming BM does indeed lower glucose levels and can make an individual more insulin sensitive, it may allow for an increase cellular uptake of nutrients.

Do keep in mind that high levels of bitter melon may cause diarrhea; however, this is not the case in all individuals. Therefore, proceed at your own risk and don't come knockin' at my door if you try bitter melon and then re-enact the scene from Dumb and Dumber when Jeff Daniels, AKA Harry Dunn, is in the bathroom after being sabotaged with a full cup of Turbo Lax "for fast, effective relief."

Next week, I'll elaborate on some more supplements that may in fact better help you control blood glucose and insulin levels.