High Carbs Or Low Carbs? Why Not Both?

Let's analyze a few popular 'carb' plans to see what's available and then take an unusual approach by combining the good points of each and developing a plan somewhere in the middle.

Diet plans are a dime a dozen. They're everywhere and they come in many varieties. Each one claims to be the diet to end all diets and all others are pale in comparison. There's low-fat, high-carb, low-carb, high-fat, and high- and low-protein. It seems one expert always disagrees with another expert's diet plan because "their plan" is the only true plan that "really works."

In this article we'll analyze a few popular plans to see what's available and then take an unusual approach by combining the good points of each and developing a plan somewhere in the middle.

It seems the biggest current craze is eating low carbs. Basically, you eat a lot of protein and any kind of fats, but you drastically limit your carbohydrate intake.

Depending on your plan, carbs might be restricted to 50 grams or less per day. Of course to make it more confusing, carbs are subcategorized into specific types of carbs. You have sugars and starches and they're the net carbs. There are also fibers and a newly-concocted chemical called sugar alcohol. That's the ingredient glycerin, which is in your low-carb, high-protein bars that keeps the bar moist instead of being a sawdust consistency.

Net carbs have a tendency to raise your blood sugar levels so you're not burning fat as efficiently. If you're following a low-carb plan, net carbs should be avoided. Unlike sugars and simple starches, proteins and fats do not raise the blood sugar levels and so you have the freedom to eat more of those. (Can you say hamburgers wrapped in lettuce instead of setting on a bun?)

Do low-carb diet plans cause weight loss? Yes. Many people have dropped weight using a form of low-carb eating habits. On these plans more calories are burned than are consumed.

A negative calorie intake causes weight loss. It's pure mathematics, but there is some merit to the blood sugar control also. In the 1980s the high-carb, low-fat diets were extremely popular.

Here's a quick summary of that plan. Eating fat makes you fat. So don't eat any fat. (Simple, huh?) Your body utilizes carbs for fuel more efficiently than fat so you should eat lots of carbs.

During the past 15 to 20 years there have been many low-fat products manufactured by the leading food companies. Most of those foods, which have been reformulated to "low-fat" status have, in essence, been junk foods. They still have all the sugar and starches (and most of the calories) but they have less fat in them.

The high-carbohydrate plan is not a bad plan in itself. In fact, I personally used it as a competitive, natural (drug-free) bodybuilder and reduced my bodyfat levels to around six percent. It got me "ripped." I was using it correctly, however. I wasn't eating a limitless supply of carbs just because they were low-fat. I watched my calories too. Again, it's pure mathematics.

I was burning more calories than I was taking in. Ingesting too many carbs will make you fat - period. Now let's take a look at how these two diets can be combined to come up with a healthy eating plan.

It's easy to follow and it won't make you feel like a zombie or make you crave bread and potatoes so bad that you can't sleep at night. Are you interested? Good. Keep reading. This is where it gets fun.

This eating plan will combine key aspects of both low-carb diets and high-carb diets. Basically you'll be rotating between low carbs on some days and high carbs on other days. It needs to be noted, however, that exercise must be incorporated to make this plan work most effectively. Ideally 20-30 minutes of cardio should be done four to five days per week and resistance training (weightlifting) should be performed three days per week.

The principles of this plan are very similar to what many athletes do to prepare for competitions. You've probably heard the term "carb loading."

For extra energy, marathon runners try to eat lots of spaghetti and other carbs a day or so before the big race. This is a form of carb loading. Marathon runners, however, are not concerned about weight loss at this stage. They want maximum performance.

The following plan cycles carb intake for weight loss, not athletic performance. This is how it works. This example plan starts on Monday. (Diets always start on a Monday, right?) On Monday, Tuesday and Wednesday you should take in about 50 grams or less of carbs. That would be equivalent to about 1-2 baked potatoes, or 2-3 small servings of rice for the entire day.

If you weigh 150 pounds, you'll need five servings of meat per day. Protein supplements can help with getting your extra protein if you don't want to eat that much meat. Look for whey or soy protein powders. They're available at most stores.

The first three days of the week you can have lots of cooked or fresh vegetables, but don't eat any fruit. You want to keep the blood sugar at an even level, so in addition to the veggies, eat only complex carbs such as baked yams, oatmeal or brown rice.

Choose lean cuts of meat. Chicken, turkey or fish are best, but lean red meat is okay too. These first three days are important because the process of eating low carbs for a few days is called carb depletion.

You're basically draining your muscle cells of sugar (glycogen) and letting the body use its fat reserves as energy. This is similar to low-carb trends but they take it one step further and continually eat low-carb foods. Exercise is important because this contributes to draining the muscles of glycogen.

On Thursday and Friday you gradually re-introduce carbs back into your diet. By increasing carbs again, you carb load, which is allowing your muscles to fill back up their energy reserves. Thursday you'll eat 100 grams of carbs and that can include some fruit.

Spread the carbs out throughout the day. Don't eat them all at one meal. You can always eat as much veggies as you want any day of the week, as long as you're eating green or fibrous vegetables. 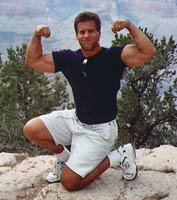 Don't include starchy veggies like potatoes for your veggie intake. Stay away from simple sugars like candy and fruit juice. Friday's carb count can be 150-200 grams of carbs. You can decrease your protein slightly on Thursday and Friday too if you wish.

On Saturday you can again repeat the cycle of low carbs for three days and then load back up for two days. You can also keep your carbs at around 150-200 grams again for Saturday and Sunday, if you like. Just start the cycle again on Monday.

Where do fats fit into this plan? In moderation. Don't avoid fats. You need fats, but don't go frying all your meats in butter either. Use a small amount of olive oil to cook your meals and eat two to three ounces per day of nuts like cashews or almonds.

Olive oil and balsamic vinegar make great bases for salad dressings. Bacon, pork sausage and greasy hamburgers, whether they're wrapped in lettuce or not, are not part of this plan. They add too many calories.

The most important aspect of this whole plan is to keep your body guessing what your intake of carbs will be. This helps the body burn fat because it won't adapt to one particular way of eating. You might want to try going four days on low carbs and then 1 day on medium carbs and one day on high carbs and then repeat the cycle.

Customize the plan for what works with your schedule. I've used a plan very similar to this for years. It has allowed me to drop my bodyfat from 16% to under 9% and keep it there with little difficulty. It allows you to get proper nutrition and at the same time it even allows me to have dessert or pizza for a treat once or twice a week. If I want to get even leaner, I simply drop the carbs down a little lower each day.

One more benefit I'd like to mention about cycling carbohydrate intake for fat loss is the lesser chance of irritability. Carbohydrate deprivation causes mood swings. I've seen it many times over the years.

When people start decreasing their carbohydrate intake, they get a little crabbier. If you don't believe me, just observe someone who has been doing low carbs for a while. When they splurge and have a hot-fudge sundae, they're much more fun to be around!

So there you have it. It's not magic and the whole plan does same take some effort adjusting to it. It also takes discipline, but all diets or eating plans do.

You can't avoid discipline completely, but you can try to make it easier so you won't feel deprived. Altering between low and high carbs is an excellent way to make the ritual of eating healthy for fat loss more attainable. Just remember, when it comes to carbs, go low and high. Give it a try.