Four-Week Program For Change Of Direction In Sports!

Regardless of whether you're breaking on a fly ball, going in the hole, or charging a bunt you have to start, stop, and change direction. In game situations, most errors and injuries occur during plays involving an all-out change of direction.

Coach Coleman designed this supplemental program for individuals who need to improve change of direction skills.

Regardless of whether you're breaking on a fly ball, going in the hole, or charging a bunt you have to start, stop, and change direction. You must also be able to keep your body under control in the process. Seldom do you run in a straight line for more than 90 feet. On most plays you take 1-2 steps sideways and 3-4 steps straight ahead. In game situations, most errors and injuries occur during plays involving an all-out change of direction.

What Is Lateral Speed & Agility?

Thus, Lateral Speed and Agility (LSA) are as important as blazing speed for effective, injury-free performance. LSA drills teach you to move quickly in all directions and to control your body when moving at max speed. 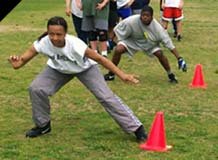 Mark your LSA course using three cones, caps or towels. Place these markers 5 yards apart. Begin by sprinting from one end to the middle marker, turn around at the marker, and return to the starting position. At this point, turn around and run to the last marker. This is a three-by ("3x") exercise because you run three legs before stopping. You should perform this drill at 100% effort.

A "5x" drill requires more rest between reps. You can perform three "3x" and three "5x" drills each day and train three times per week. Rest 2 min. between sets and drills. Repeat each drill twice. Remember to give max effort on each rep.

See the 4-week "3x" and drills in the following box. The letter "F" indicates that you run forward, "B" is backward, "S" is shuffle and "C" is carioca. In this program you will move in all directions to simulate game situations.

Do crossovers after shuttles. Crossovers are meant to increase first-step quickness to help fielding and base running. Start from the middle of your LSA course. Assume a fielding position and, using a crossover step, step to the right with your left foot, hold one count and return.

Stay low and lead with your center of gravity, not your head and shoulders. Repeat to the left, hold and return. Do 3x10 in each direction in week one. Make the movements rhythmic in week two. Crossover, break down (square up) in a fielding position, pause and go the opposite direction.

Add a 3-4 inch high box or wooden Coke carton in week three. Stand to the left of the box in a fielding position. Step onto the box with your left foot using a cross-over step, drive across the box to the opposite side, breakdown in a fielding position, pause and return with a right foot crossover step. Do 3x10 each way and limit box height to four inches.

Move faster and more rhythmic in week four. Step quickly onto the box, explode across, breakdown and return. Repeat drills wearing a weighted vest for more strength and endurance.

Next, do change of direction runs. Jog forward about five yards, plant the lead foot, pivot toward the lead foot and backpedal for five yards. Do 3x10 on each foot in week one. Turn into the lead or plant foot, i.e. move toward your back side, not to your chest side.

Stay down, make a smooth transition from forward to backward and accelerate quickly after changing directions. Progress from a jog to a run in week two and a sprint in weeks three and four.

This is the mirror image of the previous drill. Start with a 5-yard backpedal, plant and pivot on the lead foot, turn into the lead foot and sprint forward. Follow the same sequence outlined for sprint/backpedal.

Finish the workout with an explosive drill for first-step quickness. Hop five times to your right on your right foot. On the fifth landing, instantly do a forceful crossover with your left leg and sprint about ten yards to your right. Repeat going to your left on your left leg. Do three sets in each direction. Start slowly in week one. Go for rhythm in week two and speed in weeks three and four.

Be sure to also check out:
Sports Training: The Mental Preparation!