Circuit training is best for beginners and those of average fitness looking to tone up and get in shape. Learn how it can help you!

Circuit training is a popular form of fitness session used by the army, navy, sports teams, squads of athletes/swimmers as well in health clubs and fitness centers. It is generally assumed that a course of circuit training will improve both aerobic fitness and strength, thus making it a very useful conditioning method.

The type of circuit used in the studies involved weight training exercises, typically 10-12 weights exercises for both the upper and lower body. Subjects performed 15 reps or 30 seconds worth of each exercise in rotation. 15-30 seconds rest between exercises was taken and three circuits were performed. This kind of workout takes around 30 minutes to complete.

The loads for each weight exercise were normally 40-50% of 1 RM, which is half the maximum possible load the subject could lift on each exercise. Sessions were completed three times a week for 8-12 weeks. The reason weights exercises were used as opposed to bodyweight exercises, which are common in many circuit-training routines, was to enable the researchers to control the loading levels. In these studies all subjects lifted the same relative load and completed the same amount of work, so they could be compared fairly. 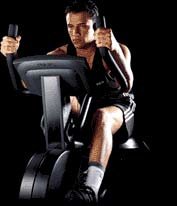 Aerobic Fitness Improvements
Research has shown that continuous running, cycling or rowing at around 75% of max heart rate for 20-30 minutes, three times a week for 8-12 weeks will lift V02max by around 20%.

In a circuit weight training session, heart rates average around 80% of max, but oxygen consumption only 40% of V02max, which is the minimum level for aerobic fitness improvements. The energy cost of a circuit training session of this kind has been shown to be 6-9 kcal/min depending on bodyweight.

Thus circuit weight training routines should be considered a low to moderate form of aerobic training, with the benefits being much less than with traditional training. Circuit training sessions with rest periods of 60 seconds have shown no improvement in V02max, so keeping the rest periods minimal is important for an aerobic-training stimulus. Alternating between upper and lower-body exercises, so that while the arms are recovering the legs are working and the heart rate is kept going can do this continuously.

The V02max of the women pre-training is much lower than the men's: 35.5 ml/kg/min as opposed to 47 ml/kg/min. This suggests that a higher level of initial fitness may mean a higher intensity of aerobic effort is needed for further improvement. Thus the moderate gain in aerobic fitness shown in the studies, around 5% uplift in V02max, may not occur in fitter individuals.

Studies have also shown that blood lactate levels increase dramatically with circuit work, suggesting a high anaerobic content to the training. This would be expected since weight-training exercises are of high intensity and require anaerobic glycolysis. Thus circuit training may be more beneficial in developing anaerobic endurance than aerobic fitness - specifically, the ability to tolerate and buffer elevated lactate levels will be improved.

Circuit training could be seen as a form of interval training; high-intensity anaerobic bouts of weight training exercises with low-intensity aerobic recovery periods. Circuit training may thus be considered useful for some athletes as an alternative form of anaerobic conditioning training. Trainers should remember that beginners may find circuit training difficult, not because it is tough on the aerobic system but because lactate levels rise above threshold levels. 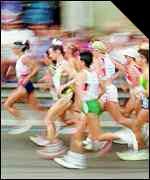 However, endurance athletes and games players may choose to use circuit weight training routines to build/maintain moderate strength while at the same time benefiting from its interval-type content which develops anaerobic endurance.

Changes In Body Composition
The research studies consistently show that lean body mass increases with a course of circuit training. A 1-3.2 kg gain in lean body mass can be expected with a consequent decrease in relative fat mass of 1-3%, total weight remaining unchanged. This is a major benefit of circuit training, especially for those who want to get in shape and tone up their muscles.

With traditional aerobic training, a decrease in relative fat mass has led to a decrease in total weight with little change in lean body mass. The resistance work involved in the circuits encourages muscle-mass development, and thus any fat loss is replaced equally by muscle gain. This makes it easier to maintain the lower body fat or reduce body fat even further because the increase in lean body mass pushes up basal metabolic rate and overall calorie expenditure.

These body-composition changes would support the use of circuit weight training routines in a health and fitness setting where toning up, but not losing weight, were the major goals.

Let compare a course of two types of circuit session. Session A was a weight circuit comprising 30 seconds work periods at 40% of I RM with 15 seconds rest. Session B was a weight circuit also comprising 30 seconds work at 40% of 1 RM, but 30 seconds of jogging were inserted between each station to increase the aerobic content. Group A improved V02max by 12% but Group B improved it by 18%. Both groups reduced body fat and increased strength to a similar extent.

The designed circuit session comprising 3 minutes aerobic activity at 75% of max heart rate, followed by a five-station circuit at 40-500 of l RM; this was done five times and the session lasted 45 minutes.

They found after 12 weeks that subjects improved V02max by 18%, which is similar to the gains produced by traditional aerobic programs. Body fat reduced by 3% and strength increased by 20. This supports the idea that in circuit training the training effect is dependant on intensity and volume of work, not on the specific choice of exercises themselves.

Weights circuits can be seen as interval training with high lactate levels and are good for anaerobic conditioning. Aerobics circuits with extra aerobic activity inserted between weight stations have added aerobic value, but this effect is yet to be tested on elite fitness athletes. Research on the effect of circuit training on elite athletes, either power or endurance, would be instructive, as I suspect that aerobic and strength gains would not be as great as with the average fitness subjects used in the studies above. 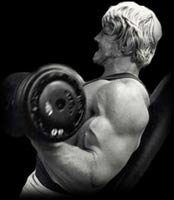 It would also be interesting to research the effects of a course of circuit training which comprised bodyweights (e.g., press-ups), light free weights (e.g., biceps curl) and calisthenics-type exercises (e.g., jumping jacks), as these are the common types of exercises included in classes in health and fitness clubs. In this kind of circuit, loading levels are probably lower than 40-50o of 1 RM, especially for the leg exercises. Therefore, I suspect that, while aerobic improvements may be similar, strength and lean body mass improvements may be smaller than with the weights circuits.

Note: Circuit training is best for beginners and those of average fitness looking to tone up and get in shape. Athletes and sports people would probably only want to use circuits early in the off-season as basic strength and conditioning work, or as an alternative anaerobic interval training method or during an injury rehabilitation period to help maintain aerobic fitness. Both aerobic fitness and strength are better improved by traditional methods. Train hard and be safe.

Luis Berrios is a bodybuilder and former Bodybuilding.com contributing writer.