What do you call a woman who balances raw muscularity, shredded abs, onion-thin skin, with beautiful lines, femininity and poise? Klaudia is the first Swede in many many years to gain an invitation to the Olympia! Learn more.

Well, first of all, you call her amazing. Then, you can call her Ms. Klaudia Larson.

Klaudia competed for the first time in 1997 and won. Needless to say, she was bitten by the bodybuilding bug. After taking time off, she came back in 1999, and did 6 competitions in a year. After she competed on and off in Sweden for about 5 years, in 2004 she won the Nutrition Outlet Grand Prix on April 24th, in Västerås, Sweden. This is the competition where she got her pro card. She started competing in the U.S., and hasn't looked back since. 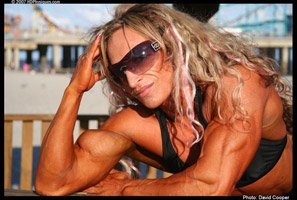 Click Image To Enlarge.
Klaudia Larson Is The First Swede Since
1988 To Qualify For The Ms. Olympia.

[ Q ] How did you get started in bodybuilding? What made you want to compete?

It's not that I woke up one day and decided "I want to become a bodybuilder".

I really don't know why, but for some reason I have always, for as long as I can remember, found muscles beautiful and attractive in both men and women.

Sometime in my early 20's I started wishing more and more of having a well-trained body. At first I was, as so many newbies are, afraid to even set my foot in a gym though. Finally a good friend of mine took me along to the gym one day. He showed me some exercises and from that day on I was hooked! 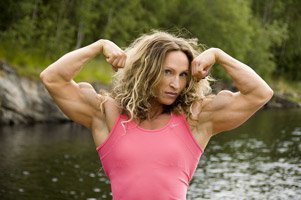 Click Image To Enlarge.
I Have Always Found Muscles
Beautiful and Attractive.

I never really cared much for any of the sport activities we had in school. I was lousy at all kinds of ball sports! I did horseback riding and worked with horses for many years. Been riding since I was 5 years old. But now, unfortunately, I haven't been up in the saddle for many many years.

I entered my first bodybuilding show in 1997. And this was only because of the constant nagging from people at the gym. They kept telling me over and over, "You really should compete! You have great genes and great talent." I just thought they were all crazy. Me? Compete? No Way! But, I guess they managed to plant a little seed in the back of my head, and this thought of actually giving it a try started growing on me. And - so I did. 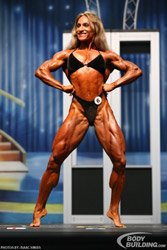 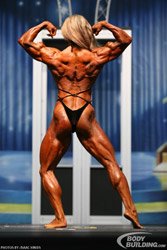 Luciapokalen, a Swedish beginners competition, 1997. I won! Because of that great outcome there really wasn't much else to do than to continue.

[ Q ] You competed in September of 2007 at the Atlantic City Pro show, and then again at the beginning of August 2008 at the Tampa Bay show. What changes/improvements have you made in the past year?

I have worked hard on trying to bring my back up. I felt I needed more thickness and width to be able to compete against the top girls. Besides that I haven't made any big changes when it comes to the actual diet.

What made this years achievements so particularly great for me was the fact that I have done everything completely on my own! Last year I was fortunate to get some help from Helly Poetzl, a very talented man from Germany. Although all we only had contact by email, it was very helpful and a great support. But this year I did it all on my own! From start to finish.

I planned my whole diet and workout, I trained every single day by myself. I have also had very poor support from people around me at home to be honest. No one knows anything about bodybuilding in the small town where I live. And sadly not even my own family shows much interest in what I am doing.

Just the feeling of having some mental support can be just as important as having any kind of practical help or advice. But I pulled it off and with a great outcome! 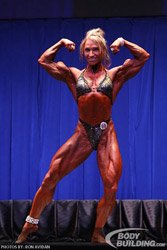 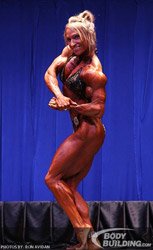 [ Q ] It's been said that the women who placed top 3 at the Tampa Bay show were chosen not only for their musculature and symmetry, but also for their femininity and beauty. The judges were trying to go away from the harder, rougher look. How does it feel to know that you could be changing the face of women's bodybuilding?

Personally I think that this is a great turning point for the future of women's bodybuilding! I don't believe in striving for women to keep growing bigger and bigger. At some point there has to be "enough".

Of course, bodybuilding is about muscles! We should never forget that! But it shall not be at the sake of losing other equally important criteria. We must not forget that bodybuilding is also about symmetry, keeping a balanced physique, proportions, definition, conditioning, and also maintaining the femininity of course.

[ Q ] You've placed 2nd at the Tampa Bay Pro show, and 2nd at the Europa Super show. What kind of momentum do you think this gives you going into the Olympia weekend?

Oh. I never want to make any predictions before a show. All I can do is MY best! I will do my absolute best to bring the same good condition as I have shown in my last 3 shows. All I can do is to try to improve myself for each time and learn something from every show! 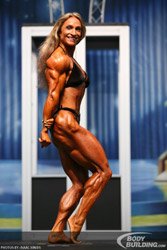 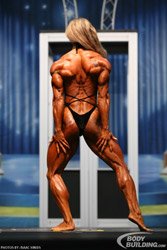 [ Q ] In qualifying for the Ms. Olympia, you are the first Swede (the fifth all-time) to make it to the Olympia stage since Veronica Dahlen in 1988. Do you ever just take a step back to realize how far you've come, and how successful you are now?

Well, what can I say, other than it truly is amazing! Awesome! And somewhat surreal. To be honest, I don't think I have really realized yet that this is actually happening!

In Tampa, right after the qualification to the Ms. 'O' was a fact, I was in a state of shock I guess. I was walking around in a cloud almost. I could not really feel any emotions at all first. But later on it came over me (and it still does every now and then) - Chills! Goosebumps! Tears in my eyes (tears of joy of course)! 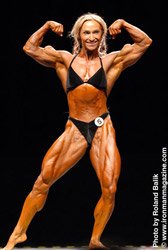 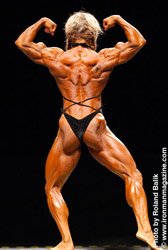 I am sooo excited! And for the first time in my life, I can honestly say I am proud of myself.

[ Q ] Are you doing anything differently in terms of training/diet/supplementation between now and the Olympia?

I only have 4 weeks. I don't think there is much you can really change in that short time. At least not possible to make any dramatic changes in the physique or so.

I will stick to pretty much the same diet and workout plan as I did for the Tampa and Dallas shows. I will try to improve my overall appearance and work on fine tuning my posing and things like that.

[ Q ] Do you take any time off between shows, or do you go straight from contest dieting mode to off-season, seriously lean mass/strength gain mode?

I really don't feel comfortable gaining too much weight in the off season. I try to stay in fairly good shape all year around, even in between shows, but it is a constant struggle because I am very fond of eating! Unfortunately I am also very weak for sweets and candy!

I just love ice-cream, chocolate, cakes and... the Cinnamon buns! The struggle is constant between wanting to eat and the fear of putting on body fat! (The thing is once I got the taste of that junk stuff there is no stopping! I have a problem of overeating which I can't control very well).

[ Q ] Do you have any words of advice/inspiration for young, up and coming bodybuilders, or just people looking for a little bit more motivation?

Always remember: It takes time to build quality muscles! I have been doing this now for 16 years! We have a Swedish saying: "Hurry slowly!"

And also I want to say to the older generation out there: It is never too late to start working out! 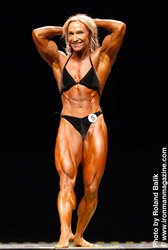 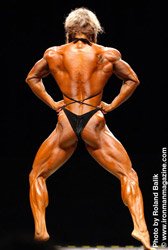 Finally I would like to take this opportunity to give my very deepest and special thank you to two very dear friends of mine: John Rogers - for all your help and support. And to IFBB Pro FBB (recently retired from competing) Vicki Nixon! -For being YOU!!! I am blessed to have you as my friend! Vicki helped me out during the weekend in Tampa and she is just the greatest friend you can ever have!

Finally a big THANKS to all my fans out there! Your support means THE WORLD to me! Knowing that there, in fact, are people out there who appreciate what I am doing, and knowing that I can inspire others, is actually what inspires me as well and keeps me motivated to continue!