The Importance Of Strength For Enhanced Explosiveness!

Want to jump higher, run faster, and increase your explosiveness for sports? If so you must be STRONG! Learn the importance of strength for sports!

Want to jump higher, run faster and increase your explosiveness for sports? If so you must be strong!

There has been a vast improvement in the overall speed, size and power displayed in all sports over the last 10 years. Athletes are by and large bigger, stronger and faster then their predecessors of yesteryear.

Strength training has made the single, most positive contribution to this type of improvement. Witness the performances this year of tennis ace Serena Williams and Giants slugger Barry Bonds.

Today strength training influences every athletic program in the country, no matter what the sport—male or female. Athletes now find it necessary to lift weights and participate in conditioning programs to better prepare themselves for the competitive rigors of the athletic season.

The Importance Of Muscular Strength

It has been proven that athletic performance depends either directly or indirectly on qualities of muscular strength. The primary function of the 600+ muscles in the body is to contract in order to cause movement in body parts. Only muscle can cause movement.

The stronger your muscles and the more forceful the contractions are in relationship to your own bodyweight, the faster you will run, the higher you will jump, the farther you will throw and the harder you will hit. It's that simple! Not to mention, having a basis of muscular strength is important to avoid injury.

For example, there has long been an epidemic of ACL tears with female athletes—basketball, volleyball, and cheerleaders in particular.

Although some of this is due to structural differences in comparison to men (wider hip structure)—Studies have also proven that one of the reasons females are susceptible to ACL tears is due to their lack of relative lower body strength.

Maximum strength is the backbone upon which all other strength qualities lie. You'll hear me talk a lot about being fast and the importance of speed, power, reactive ability etc.

All of these qualities of strength are important, but truthfully, unless you have enough raw horsepower in your engine you won't be going anywhere or doing anything in a hurry! In this case you can think of horsepower and maximum strength as being synonymous.

For this reason, absolute muscular strength must first be brought to optimal levels and simultaneously blended into strength that you can use for your sport, or "functional" strength. Maximum strength can be displayed through 2 types of muscular actions:

Despite the current preoccupation with plyometrics, platform shoes, gimmicks, weighted vests, etc, improving basic absolute strength has long been the most efficient way to improve speed, agility, jumping ability and explosiveness in sports. In fact, Romanian strength and periodization specialist Tudor Bompa suggests that "No visible increments of power or speed-strength (force x velocity) are possible without clear gains in maximal strength." Why is this?

To appreciate the importance of muscular strength on the ability to display power and explosive strength, imagine a rocket weighing 1,000 pounds, with an engine capable of 1,200 pounds of thrust. This rocket has only 200 pounds of reserve force to propel itself.

The same rocket, when equipped with an engine rated at 3,000 pounds of thrust, will have 2,000 pounds of reserve thrust that can be used for propulsion.

Now back to the gym: a 200 pound man capable of squatting 250 pounds for a single rep will have a mere 50 pounds of reserve strength available to propel his body upward during a vertical jump.

Contrast this with a 200-pound elite-class powerlifter capable of squatting 600 pounds. Now we've got 400 pounds of strength reserve available, and all things being equal, he will have a vastly superior vertical jump compared to the novice squatter. 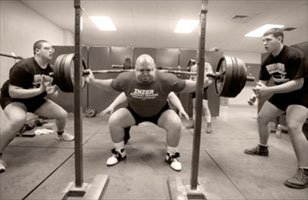 Another example is that of the medium distance runner. In order to run 800 meters in 1:45, it is necessary to be able to run a 10.6-10.7 second time in the 100 meters. One needs to possess great strength potential to do this and generally have the ability to execute 3 consecutive standing long jumps covering a total distance of at least 9 meters, for which middle-distance runners usually do not have the strength.

Elimination of this weakness is possible only through specialized strength training, which shows a stronger influence on the muscles than distance training, thereby intensifying or "speeding up" their endurance work. As a result, the power and capacity to run a fast 800 meters is improved.

But is there such thing as having too much strength? Well it depends on the person but generally, Yes there is! Before getting into that, let's first examine the type of strength and force required for optimum sports performance.

The maximum amount of force you produce during any given sports movement is called F-max. I think it's fairly obvious that in most sports endeavors requiring explosiveness, quickness or speed, you'd like your force output to be as high as possible.

In any sports movement, the time you have to apply maximum force is so short that it's not possible to get all your muscles turned on and display maximum strength and force. Not even close! Only powerlifting, where a movement may take many seconds or longer to complete, tests one's maximum strength.

NO other sport does because of the time constraint. You have only a fraction of a second usually to exert any given amount of force in any given sports movement. You never equal your maximum strength levels in sports movements because the movements are over with so quickly.

So, although strength is important, also understand that simply working on your maximum strength for years on end is usually NOT the way to become great! In fact it can and will slow you down if carried to the extreme.

The coaches of yesteryear were partially right when they wouldn't allow their players to lift for fear that doing so would foul up their "touch" (skill), make them muscle-bound or slow them down. They were right. The reason is that continually hammering maximum strength—your 1-RM—will eventually result in muscle being synthesized and bodyweight being added beyond the point where your strength-to-weight ratio is greatest.

Record holding powerlifter and author Fred Hatfield a.k.a. "Dr. Squat" says that former Soviet scientists worshipped the relationship between an athletes maximum strength and the amount of force that athlete could apply in their sporting movement (F-max) and for good cause.

So, this being the case, we must give consideration to the concept of functional strength, or the amount of strength necessary to maximize the strength you can produce in a quick sporting movement (F-max) without causing an increase in the difference between F-max (the amount of force you can produce in a sporting movement) and maximum strength. To do this it helps to pay attention to relative strength, or strength per unit of bodyweight.

Whereas absolute strength refers to strength irrespective of bodyweight, relative strength is a term used to denote an athlete's strength per unit of bodyweight (his or her "pound for pound strength"). So, if two athletes of different bodyweights can squat 275 pounds, they have equal strength for that lift, but the lighter athlete has greater relative (pound for pound) strength.

Athletes who compete in weight-class events depend heavily on relative strength, as do athletes who must overcome their bodyweight to accomplish a motor task (i.e. long jump, sprinting, etc.). Further, sports which have aesthetic requirements (figure skating, gymnastics, etc.) demand the development of strength without a commensurate gain in bodyweight.

So how do you know if your strength to weight ratio is optimal? Simple. If your strength is going up faster then your bodyweight and your performance is improving as well then you're on the right track. You definitely don't need to be afraid of an increase in bodyweight so long as the strength gained from that bodyweight is functional.

If one weighs 150 pounds and squats 200 lbs and increases his bodyweight to 175 lbs and improves his squat to 300 pounds, his strength:bodyweight ratio has improved considerably! Oftentimes a 10% increase in body-mass will lead to as much of a 30% increase in strength or more!

So how do you know when you've reached a point when you're becoming too strong? Simple. The thing to note is "eventually", but not "immediately", increasing strength and body-mass could result in negative effects on speed, size and relative strength.

Fortunately, you will know of this long before it happens as you will find that an increase in strength fails to yield an increase in sporting performance (speed, jumping ability, etc.) You will also find that the amount of work required to stimulate additional strength gains will begin to interfere with sport-specific work.

To give you an idea on when that point might come realize most elite sprinters routinely squat with weights 2-3 times their bodyweight!

Since strength training targets the neuro-muscular system, strength can be developed through two very different means, by applying stress either to the muscular or to the neural aspect of the system.

The former method is usually accomplished through the application of "bodybuilding" methods (repetitions between 6-12 to exhaustion, using continuous tension techniques) and results in strength gains through an increase in muscle size.

The latter method employs higher intensity training (repetitions between 1 and 5 using accelerative technique and full recoveries between sets), and increases in strength are the result of the body's improved ability to recruit more of its existing motor unit pool, or increase in neural efficiency.

For optimal strength gains you'll need varying amounts of both. First, maximize the strength per unit of bodyweight until your relative strength is high. Then you can look to increase muscle size so you have more muscle to tap into for further strength increases.

Be sure to check out:
Tempering: How To Strengthen Your Body From The Inside Out.