Joe Weider The Phenomenon: A Remembrance Of The Father Of Bodybuilding

Joe Weider was more than a publisher and promoter. He was strength training’s most charismatic prophet at a time when it languished in obscurity. An editor who knew Weider ponders how the Master Blaster succeeded against the odds. 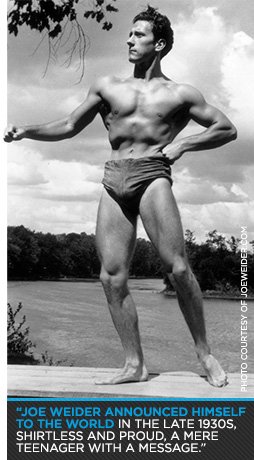 When Joe Weider passed away March 23, he was 93, give or take a couple of years. His actual birth date lacks documentary certainty, which is fitting—he was a bit of a mystery. He was born and died like all men, but he didn't live like most. How did Joe Weider the phenomenon happen?

He announced himself to the world in the late 1930s, shirtless and proud, a mere teenager with a message—and no sensible person listens to teenagers. It didn't matter. Nothing could slow his evangelical fire to spread the gospel of empowerment through weight training, not when he was 19, not when he was 89. Even death couldn't silence his message. We now live it.

In this era of Ted Talks and CEO hagiographies, terms like "visionary" and "passion" get thrown around like cheap confetti, but Joe was the real deal. He wasn't the only ambitious publisher specializing in physical culture, but his single-minded quest, un-tethered to market demands, moved inexorably on while his competitors gave up; they were unable to overcome the indifference and sometimes outright hostility to their subject matter. The world finally caught up to Joe around the same time Jane Fonda slipped on leggings and Pumping Iron made a sensation of Arnold Schwarzenegger, but that was more than 40 years after his mission began.

When Joe stapled together the first copies of Your Physique in 1936 and walked the streets of his tough Montreal neighborhood, he took a leap of faith not unlike a religious prophet. Joe's brother, Ben, became Aaron to Joe's Moses mission, and Ben remained Joe's most committed convert until Ben's death in 2008. The brothers founded the International Federation of Bodybuilders, and began their quest to make posing in tight briefs as natural and acceptable as playing a game of soccer.

To Joe, of course, it was much more than a stationary pose.

The Missionary of Muscle

In the 1930s, bodybuilding was regarded as almost pornography, or worse, a kind of personality disorder. It's difficult to explain to young people today just how unusual weightlifting was before World War II. 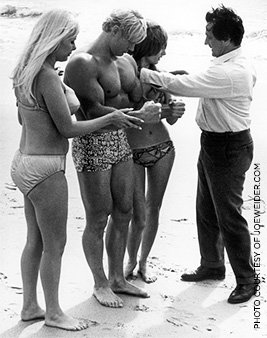 He moved to New Jersey and launched multiple entrepreneurial startups beyond publishing, including equipment and nutrition companies. Sometimes he went bust, and then just started over again. He kept pushing, achieved small successes, made enemies, found more success, made more enemies, then moved out to California in the 1960s, when surf culture and the "body beautiful" ideal captured the national imagination. Muscle Beach was born.

Bodybuilders were still novelties but not shunned. Dave Draper, the iconic beach muscle stud of the swinging '60s, was championed by Joe, becoming his favorite magazine model. With his thick blond locks and solemn presence, Draper often shared the cover with Betty Weider, Joe's wife and a well-known '50s magazine pinup (known then by her maiden name, Brosmer). Draper was regularly cast in films and television shows, including, memorably, The Beverly Hillbillies, in which Granny worried that the bulging muscleman's swelling was caused by bee stings.

While Joe worked hard to take a maligned subculture mainstream, bodybuilders became suspicious of his success; some felt exploited and ripped off. This was typical of its time. It took a momentous legal challenge by St. Louis Cardinals outfielder Curt Flood in 1970 to free Major League Baseball players from the system that enriched the owners at the expense of the players. Joe played the game according to the standards of the era and alienated some of the athletes he mentored.

In the early '70s, Dave Draper and Joe had a falling out that ended in a court case. This is a fact that stunned me when I learned of it many years later. I interviewed Draper in the Weider offices in 1993 for an article on the golden age of bodybuilding. Still imposing, with a sinewy musculature replacing his youthful bulk, Draper fondly recalled his roots in the sport, never once evincing any bitterness for past injustices. His interest was in the interior journey.

Sitting under the roof of Weider HQ with this soft-spoken, thoughtful man challenged the simplistic stereotypes I had formed about bodybuilders. Coming from the world of ink-stained wretches, I had just started at Weider Publications as a copy editor with little knowledge of the cult of physique. The interview with Draper changed the course of my life.

Committed to the Brotherhood

Over the next decade, I would get to know Joe Weider and begin to understand his enormous impact. At first, I wasn't sure what to think. His unique speaking voice, sometimes described as a Montreal street brogue, is what you first noticed about him. Often gravelly, with discordant tones punctuated with garbled syntax and the occasional bark, Joe Weider's voice was as distinctive as it was emphatic. Those who knew Joe could never quote him without imitating that voice-not out of mockery, but out of accuracy. The words just wouldn't seem authentic if you didn't say it the way he said it.

He'd bound down the hall in tennis shoes (his feet gave him problems), his once black, old-timey mustached trimmed to a salt-and-pepper strip. He'd drop in on creative designers and editors, checking on progress, keeping the wheels turning. His car's license plate read, "TODO BOY," and he did plenty. His enthusiasm for exciting page layouts, new nutrition products, branding, labeling, packaging—all of it fueled by the same drive he had as a teenager—was ceaseless. At this time he was in his 70s, when most men his age shuffled through early-bird buffets in baggy pants. 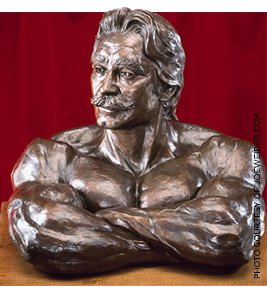 You had to know Joe to realize that even his outsized flights of ego had a bombastic charm, such as the iconic bust of him folding his arms over his impressive chest. Only it wasn't Joe's chest—the torso belonged to bodybuilding great Robbie Robinson. Joe mastered the art of branding before the practice had a name.

The image-casting was part of his marketing genius. He had an instinct for connecting with an audience, especially young men. His publications reached across generations, ethnicity, race, and economic class. When I would tell people who I worked for, they'd either shrug clueless, or show instantly how enamored they were with him.

Joe's "Road to Damascus" moment is hard to pinpoint, but it may be the time as a teenager in Montreal when he walked into his first gym. After fashioning a crude set of barbells at home with spare parts in his garage, he discovered a professional gym with real free weights. There, he met other men with a similar passion and felt an immediate kinship, energized by the camaraderie of the gym members.

The idea of a "brotherhood of iron" defined him as much as anything. He'd relish meeting with bodybuilders, marveling at their progress, helping to perfect their posing. For pro bodybuilders, having Joe endorse you was like being blessed by the Pope, but to Joe, they were all in the same fraternity.

His sharp-elbows business style was tempered by a strong paternalistic streak that deepened as he aged. I experienced it myself. For some reason, Joe took a shine to me during my years in his employ. He championed me as a writer and editor, even at a time when the executives in his company thought it would benefit all if I took my talents elsewhere. In fact, they insisted on it. But Joe intervened and I stuck with him and Weider Publishing until he sold the company in 2002. I had no quarrel with the new owners, but I left shortly afterward.

I stayed in the industry, the one Joe Weider created, editing Muscle and Body. I would occasionally visit Joe at his house for lunch. He'd order lox and fish from a nearby deli and we'd talk about the old days and his plans for the future. For the first time in more than seven decades he didn't have a magazine empire to run. He would muse about starting another one, but it seemed far off. Publishing had changed dramatically. Everything trended digital.

He carried many nicknames, most famously, "The Master Blaster," and "Trainer of Champions." But "The Father of Bodybuilding," may be the most fitting. He famously played a paternal role to Schwarzenegger, and Arnold, to his great credit, stayed close to Joe. As California governor, he declared "Joe Weider Day" at the state capitol on July 9, 2007, when Arnold, legislators, friends, and family members held a ceremony celebrating Joe's life. There they were, two embodiments of the American Dream, both successful immigrants with sometimes indecipherable speaking styles, holding court in the most populous state in the country. 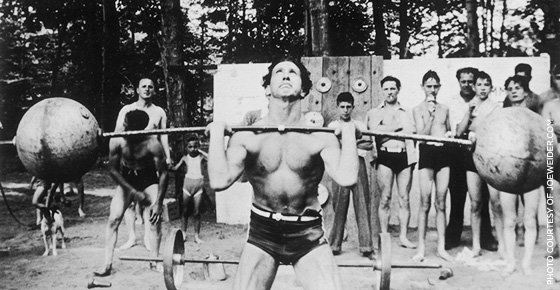 Despite his triumphs, Joe remains indefinable to the general public beyond his mentorship of Arnold. The mainstream media never knew what to do with him. It didn't grasp his overwhelming influence on the fitness revolution, remaining preoccupied with hyper-muscular extremes and what is required to achieve it.

Sportswriters, in particular, have always mocked bodybuilders. The athletes they cover never did. They grew up with Joe. They'd beat a path to his door, hoping to shake his hand, tell him how much he meant to them. Hollywood action stars, average gym-goers, big-time athletes, weekend warriors—it didn't matter. He inspired them all.

His legacy is secure, even if it doesn't always have his name attached. It's in the letters I receive from readers who share their success stories about making dramatic changes to their bodies. It's in every health club and hardcore gym, every protein shake and nutrition bar. It's in the hundreds of fitness websites, YouTube videos, and magazines that preach the gospel of Joe, whether they know it or not.

So thanks, Joe. You made sure we got our ass to the gym, and you weren't going to take no for an answer. We got the message, and we're never going to stop telling the world.

Jim Schmaltz is a writer and editor with more than 25 years in the health and fitness industry.