I was always the chubby girl who shied away from sports. Truth be told, I hated my body. So when I finished high school, my mom gave me a gym membership and a prescription for weight-loss pills. She was trying to help me, but little did she know she was making things worse. So, I started to do two hours of cardio per day and ate just vegetables or pineapple and wheat germ.

I went from 144 pounds to 116 pounds in one year. I was so happy with my body, but I was also frustrated. I was weak and was admitted to the emergency room for symptoms that I now realize had to do with my diet. There were times that I wasn't able to finish my cardio routine because I felt so weak.

Later that year, I started my first job and began a relationship that consumed most of my time. I left the gym and dedicated my time to study, my career, and my boyfriend. It was too late when I realized I was in an abusive relationship, but I was too afraid to talk about it. So I befriended food.

I gained more than 50 pounds during those three years that I spent with him. I laugh now, but I will never forget his words when I talked about marriage: "I'm not going to marry you because you are too fat, but I won't leave you because I know you will lose weight and will get a new boyfriend."

When I finally got the courage to leave him, I partied with new friends: alcohol and cigarettes. I was at my worst when, after a few months of leaving him, I found out that one of my good friends was dating him. I had never felt so low. I knew I needed to get help and went to a counselor.

When those wounds healed, I was able to think about other things. I realized how obese I was and I began hating my body again. But I didn't do anything about it; I just kept hating, drinking, and partying.

I was drunk at the beach with my friend one day when a friend asked me if I was planning to stay fat forever. Right then and there, I decided to change. When my friend felt my sadness and frustration, he offered me guidance to lose weight the right way. 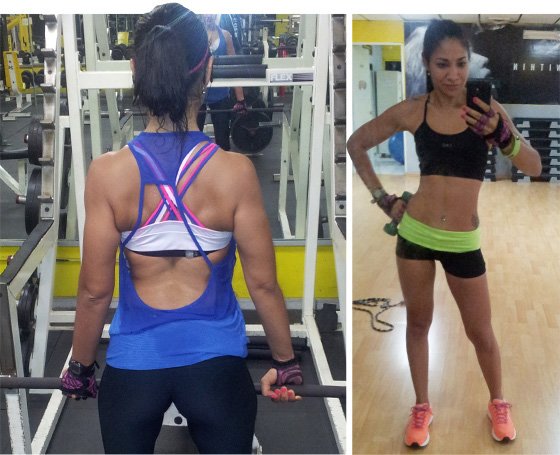 "Within three short months, I created the body I dreamed about. I did it through eating and exercising."

First he taught me about the importance of nutrition. In the first week, I lost 10 pounds just by changing my eating habits. I was hooked. Next, he sent me to Bodybuilding.com and showed me Shani Ariel's Transformation of the Week. After reading that story and several other transformations, I created my own BodySpace profile.

After two years of being healthy and happy, I decided that I want to beat my plateau and create a bikini body. I joined [bikini competitor and personal trainer] Kelsey Byers's challenge and hired her nutritionist for Skype sessions. It's amazing how technology works!

Even though I'm in Panama, I was able to get proper guidance. Within three short months, I created the body I dreamed about. I did it through eating and exercising.

Be patient and consistent. This is a lifestyle and the goal is lasting change. Surround yourself with people with similar goals. I created a new circle of online friends, and I love it.

I know people all around the world who encourage me to keep going. Don't keep your goals to yourself. If you are struggling with something, look for help. Share your achievements—you can motivate others!

Panama has a huge obesity problem. Our traditional dishes are mostly fried. Regardless of how the fitness community has grown in Panama over the last few years, it's still really hard to find healthy meal options. It is easier and cheaper to find unhealthy food.

Do you live outside of the United States? Have you made a dramatic change either by gaining muscle or losing fat? If so, send in your pics, stats...